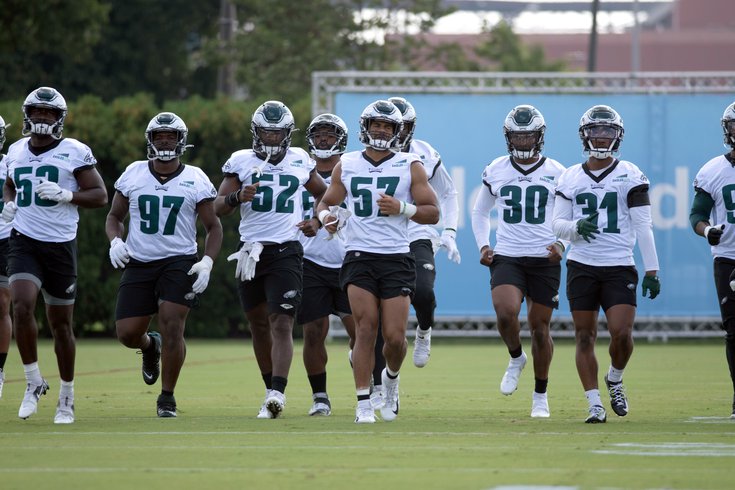 Here's a picture of a random group of Eagles players, which works well for a 53-man projection post.

There was an argument to be made that for the first four or so practices that Mullens had been the best passer of the group, but he's had some shakier days of late. My bet is that the Eagles will roll with two quarterbacks this season, and they'll try to keep Mullens on the practice squad for emergency purposes.

For those of you who asked if the expanded practice squad rules of 2020 would carry over to 2021, yes, they will.

I believe the Eagles will go heavy at the running back position with Sanders, Scott, and Gainwell as locks, while Johnson and Huntley will stick because of specific traits.

Johnson is easily the best back on the team in pass protection, which on its own doesn't guarantee him anything, but he has looked healthy and shown just enough as a runner to justify a roster spot.

Huntley is one of the fastest players on the team and is competing for the No.1 kick returner job. If he can start making more plays out of the backfield as a receiver, he might even find a role in the regular offense this year.

Watkins has made several nice plays in his recent return to the field, and has a clear edge over Hightower. Arcega-Whiteside hasn't stood out much, but he also hasn't made many mistakes. I believe the front office will dictate that he gets one last chance to show something this season.

Jackson is big and athletic, but he has a long way to go in terms of refining his game. I can see a role for him in 2022, but in the meantime, the Eagles shouldn't chance losing him, because he possesses legitimate promise.

As for Ertz, the Eagles are playing a dangerous game having him as a full participant in practice every day, but keeping him on the roster in 2021 at $8.5 million doesn't make much sense. I remain convinced the team will trade him.

In my mind, there's no more competition between Mailata and Dillard for the starting LT job. Mailata has that on lock. Fun prediction: The Eagles hold Dillard out of practice with a minor injury so that Mailata can get first-team reps every day going forward, and they attribute Dillard's poor performance this camp to the injury, but maintain that they love his talent. Behind the scenes, they try to sell that narrative to other teams around the league while shopping him for a Day 3 pick, but find no takers.

Otherwise along the OL, I wouldn't be surprised if Dickerson misses the first six games of the season on the PUP list. Seumalo and Brooks are sidelined at the moment with injuries, but assuming they both return in time to start Week 1, the Eagles have a capable backup along the interior in Herbig. That extra time would allow Dickerson to fully rehab his knee. The team views him as a long-term starter, but there should be no rush to get him on the active roster this season.

If they went that route, it would open up another roster spot on the defensive side of the ball, where Jonathan Gannon has expressed an interest in showing a wide assortment of personnel looks.

Keeping just eight offensive linemen might seem light, however, Dickerson and Clark would be slated for return after Week 6, and the expanded roster rules would allow for guys like Juriga, Opeta, or Toth to be temporarily elevated to the active roster, as needed.

In our pre-camp version, we had Ridgeway on the outside looking in, but with Milton Williams playing more DE than DT, Ridgeway is in.

Apologies to McGill, who has flashed at times throughout camp so far, but at 28 years of age, he isn't likely to be poached by another team and can probably safely stick on the practice squad until needed.

Avery has gotten his share of first- and second-team reps, but still just hasn't made plays. Because the team gave up a fourth-round pick to acquire him, I can see him sticking on the roster, but it's just too hard to justify for me.

Singleton hasn't practiced yet, by the way. He remains on the COVID list.

This group feels pretty straightforward. I know there are some Jacquet fans, but there isn't room for seven corners.

We'll see if McLeod can return from the PUP list before the start of the season. If he can't, I would have Adams as the fourth safety.