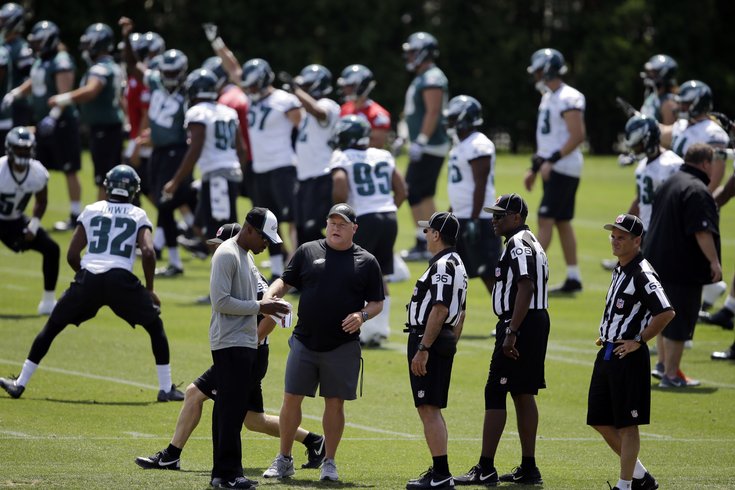 Admittedly, this is way too early to be doing a 53-man roster projection, but since we have six looooooong boring weeks ahead of us with little to no Eagles news, let's take an early look at what the roster may look like.

As always, Chip Kelly would say the depth chart is written in sand: 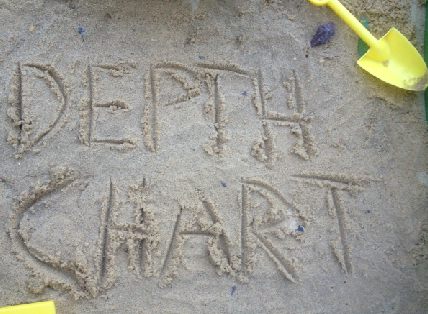 The Eagles are very invested in Bradford, in that they traded their starting quarterback, a second round pick, and draft position in the 2015 draft for him, plus they're paying him $13 million. He will start as long as he can stand. Sanchez is a quality backup and obviously a lock to make the team, while Barkley has clearly looked like the better quarterback between he and Tim Tebow so far. Sorry, Tebow fans. I just don't see it.

This is the best running back trio in the NFL by a mile. In the past, the Eagles have easily stashed Matthew Tucker away on the practice squad and called him up if a running back got hurt, and they'll have the option to do that once again in 2015. Otherwise, one player who has shown some wheels is rookie UDFA Raheem Mostert, but he's a still a longshot to make the roster.

Matthews, Agholor, and Huff are the only 100% locks to make the team here, with Cooper not all that far behind, in my opinion. Ajirotutu has shown some ability as a receiver in OTAs and minicamp, and is a special teams maven. I really don't see the fit for Austin as an aging, oft-injured player who hasn't been good in years, and hasn't contributed on special teams in a half decade. However, the team will take a million dollar cap hit if they cut him, which is a strong indication they expect him to be on the team.

None of the UDFA tight ends the Eagles signed have impressed in any way during OTAs and minicamp as receivers. Perhaps the team will like what one of them brings to the table as a blocker and they'll find a spot on the practice squad, but the tight end group that will make the 53-man roster seems pretty straightforward here.

The five projected starters noted above are all locks, obviously, with Gardner and Molk seemingly having the safest standing among the reserves to make the team. Of the rest, it's slim pickings. Kelly at least has some game experience and positional versatility. The Eagles made Boyko a priority UDFA signing when they gave him a $20,000 signing bonus.

I went heavy on the defensive line, which also happens to be the biggest strength on the defense. Cox, Logan and Thornton form one of the best starting 3-4 DL trios in the NFL. Curry is a great pass rush specialist, Allen provides quality youth depth at NT, Bair has special teams value, and Hart returns as a bulked-up second year player. The team can try to stash rookie seventh round pick Brian Mihalik on the practice squad and develop him.

Barwin and Graham are obviously locks, and I can't see the team giving up on Smith this soon, even if they don't see much improvement. Braman remains a force on special teams. The snub here is Travis Long, who Chip Kelly said would have made the team last year if he hadn't gotten hurt. Long has OLB-ILB versatility, but so does Brad Jones, who we'll note below.

To note, I have Kendricks projected as a "starter," because I think he'll ultimately get more snaps than Ryans. But obviously the Eagles are stacked at ILB. We mentioned above that Travis Long has OLB-ILB versatility, but the team has also been giving Brad Jones reps at both spots. Because Jones is the more proven special teams player and Long still has practice squad eligibility, we'll give Jones the nod. Also, don't be alarmed by Jordan Hicks being projected as a Week 1 inactive. It has nothing to do with anything I didn't like when I watched him in OTAs/minicamp -- He's merely a victim of an abundance of depth at his position.

Many are projecting Carroll to win the starting job, but I think it'll wind up being Rowe. He'll be given every opportunity to win that spot, and I like what I've seen of him so far. Otherwise, Boykin will be the nickel, again, assuming the team doesn't trade him, and Carroll will likely either start or resume his spot as the dime linebacker.

I think that at this point, Thurmond has separated himself to some degree as the favorite to start at safety opposite Jenkins. Earl Wolff and Jaylen Watkins' jobs are clearly in jeopardy with two very good special teams players in Maragos (a lock) and Prosinski potentially eating up two roster spots at safety.

The only player here with any "competition" here is Donnie Jones, who will easily dispatch of UDFA punter Kip Smith.