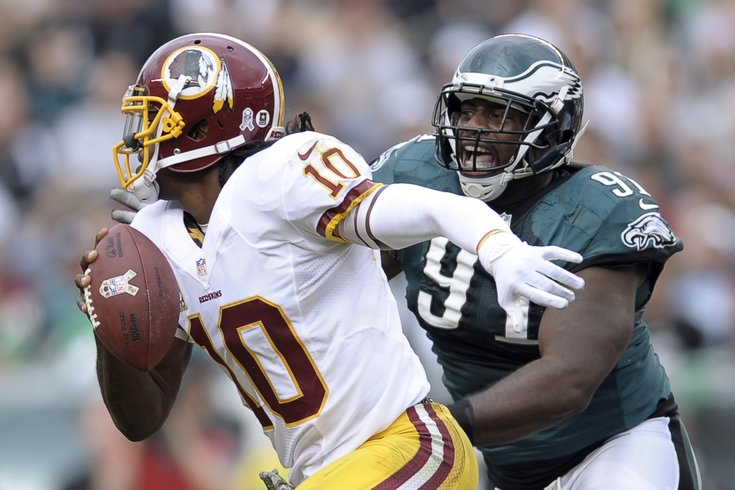 Fletcher Cox is the best player on a very young and talented Eagles defensive front seven.

With the NFL's free agency period and the draft in the books, NFL teams will continue to tweak their rosters, but for the most part, we can make educated guesses at this point on who each teams' projected starters will be. Earlier this offseason, we took some inventory on Eagles' players' ages, broken up by positional groups, starting with the offense. In cased you missed those, you can find them here:

The Eagles' projected starting front seven only really has one debatable position, in terms of who will start. That would be inside linebacker, where the Eagles have a logjam of talent, including three starting caliber players in Kiko Alonso, Mychal Kendricks, and DeMeco Ryans. I'm projecting Alonso to rarely come off the field, with Ryans and Kendricks splitting snaps.

For this exercise, we projected Kendricks as the "starter" opposite Alonso. There will probably be games in which Ryans is the first player of the two who steps on the field, but ultimately, I believe Kendricks will get more snaps. It's all about how you define what a "starter" is. If we were to substitute Ryans for Kendricks, the Eagles projected starting front seven would have an average age of 26.4, which would tie them with the Titans for the 20th oldest front seven in the NFL.

Of the NFL's 224 projected starting front seven players, here is where the Eagles rank:

• The Eagles are one of just three teams who will not have a projected front seven starter over the age of 30 when the season begins. As the above chart shows, Connor Barwin is the oldest Eagles defender, at 28 years old, and he is the 72nd oldest projected front seven starter. He is also the 112th oldest projected starting defender (including defensive backs). That means that there are 111 projected starting defenders who are older than the oldest Eagles starter on defense, or an average of 3.58 players per team.

• If you include defensive backs, the Eagles are the only team in the NFL without a projected defensive starter over the age of 30 when the season begins.

• While their most prominent defenders start, the Eagles have some experience in terms of depth. Usually, it's young guys backing up the old guys. The Eagles have it the other way around. DeMeco Ryans (30), Brandon Bair (30), and Brad Jones (29) are all older than any of the Eagles' starters.

• The Eagles also have intriguing depth at most of the front seven spots. Along the defensive line, Vinny Curry (9 sacks, 4 FF in 2015) is an excellent situational pass rusher, Beau Allen provides quality depth and youth at NT, Bair has special teams value, Taylor Hart returns as a bulked-up second year player, and Brian Mihalik is a athletic guy the Eagles can try to develop. At ILB, the Eagles are stacked. either Kendricks or Ryans will be on the bench, Travis Long and Brad Jones both have OLB-ILB versatility, and Jordan Hicks was a third round pick. The only spot where the Eagles have some depth questions are at OLB, where Marcus Smith still has to show he can contribute.

To conclude, being young is nice, if you have good players. But if your players aren't good, being young is not very useful. The 2012 Eagles, for example, were the second youngest team in the NFL to start the season. That team got Andy Reid fired. However, when you have a mix of youth, talent and depth at a positional group, you can really begin to grow something special, and that is what the Eagles can potentially do along their defensive front seven.