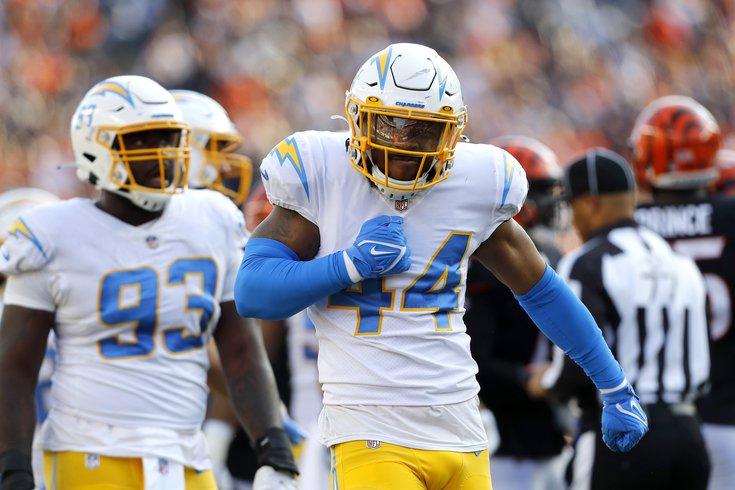 The Philadelphia Eagles announced on Saturday that they have agreed to terms with linebacker Kyzir White on a one year deal. According to Ian Rapoport of NFL Network, the one-year deal is worth $5 million.

White was a big-hitting safety/linebacker hybrid at West Virginia, who is now an undersized linebacker in the NFL at 6'2, 218. He was drafted by the then San Diego Chargers in the forth round in 2018.

In 2021, White had his best season for the Chargers, statistically anyway, when he racked up 144 tackles, 2 INTs, and 1 sack. As a former safety, he has the range that some of the Eagles' linebackers lacked in Jonathan Gannon's scheme in 2021, when opposing offenses torched the Birds' defense in the short-to-intermediate areas of the field.

Here's an interesting film breakdown from during the season in which Daniel Jeremiah (who calls Chargers games on the radio) called White the Chargers' most valuable defensive player. Start at the 4:28 mark.

The Eagles have added their share of linebackers with safety experience over the last half decade or so, such as Nate Gerry, Davion Taylor, and Kamu Grugier-Hill, to name a few. Obviously, they have not yet had much success with that approach. White will come to Philly having already successfully made that transition.

White should be an upgrade on the recently Denver-bound Alex Singleton, and $5 million is an appropriate price.