Bengals 19, Eagles 0: Good, bad and ugly from first half 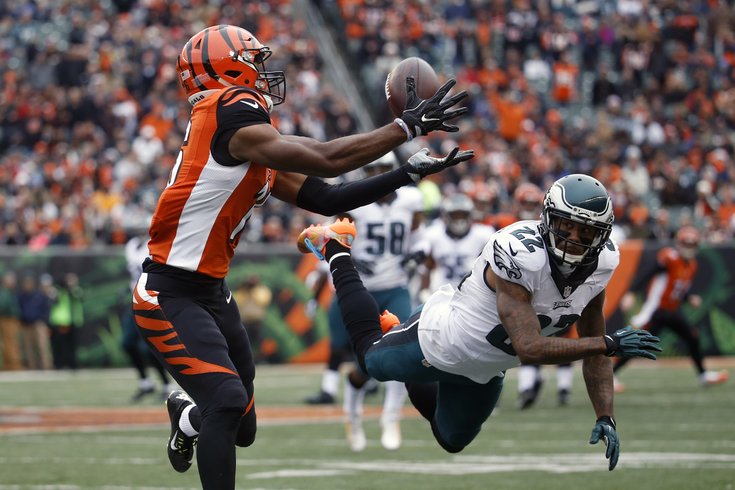 If you're looking for good, you've come to the wrong place. That's not what we've seen out of Doug Pederson's Eagles team in the first half against the Cincinnati Bengals.

They currently trail 19-0 at halftime after the Bengals added a late touchdown to increase their lead. Here are some quick observations from the first 30 minutes:

•  I bet you didn't think Nelson Agholor would be the first player to make an appearance here. With Jordan Matthews out, he actually got the start after missing last week's game -- and he made some catches! The first was pretty crazy, and only makes his recent drops all the more confusing.

•  Carson Wentz looked pretty good on the run in the first half. Unfortunately, that's about all the good we saw from the rookie. He finished 8-of-18 for 67 yards. Furthermore, he had three passes that should've been intercepted but was bailed out by drops.

Wentz has like 5 dropped TDs this season. Making up for it today with 2 dropped INTs.

•   After they held the Bengals to a FG on their opening drive, Andy Dalton took advantage of the Eagles secondary on his second possession of the day. He converted on two third and longs while leading his team on a touchdown drive.

The first was a 3rd and 9, but Dalton hit Brandon LaFell for a 23-yard first down.

The second came on 3rd and 8 and was a 50-yard pass that set up first and goal.

Two plays later, Jeremy Hill punched it in for the first TD of the first half.

•  The opening drive for the Eagles was a decent indicator of how the rest of the first half was going to go.

The Bengals had given up opening drive touchdowns in each of their past four games.

Three and out for the Eagles.

They finished with just 104 yards of total offense.

•  The Bengals, meanwhile, scored on each of their first four possessions. They hadn't scored on their first three in since 2014 (30 games). They capped the scoring off with a 13-yard TD pass from Dalton to Tyler Eifert. Dalton finished 16-20 for 217 yards and a TD.

•  Remember that Wentz run? I was one of the few good things we had. Well ... just take a look at Zach Ertz at the end of that play.

•  Just when it looked like the Eagles had some momentum, they started going backward. A pair of false start penalties forced the Eagles into a third and long -- they had already converted on 3rd and 7 and 3rd and 9 on the drive -- and Pederson's play call was questionable to say the least.

Ertz and Peters just shrugged after that play like WTF?

The back-to-back false starts made that a 51-yard attempt instead of 41.

•  The Eagles finished the first half with six penalties (for 40 yards), including four false starts. Not only did the two aforementioned false starts likely lead to Sturgis' miss, but another came on 3rd and 7, forcing the Eagles into a 3rd and 12 that they didn't convert.

•  It looks like the only thing DGB caught was whatever Agholor had.

Tight coverage. Can't place it any better than this. DGB should make this catch. pic.twitter.com/uatlLLU8fs