Eagles-Cardinals injury report, with analysis: Everyone should be a go, again 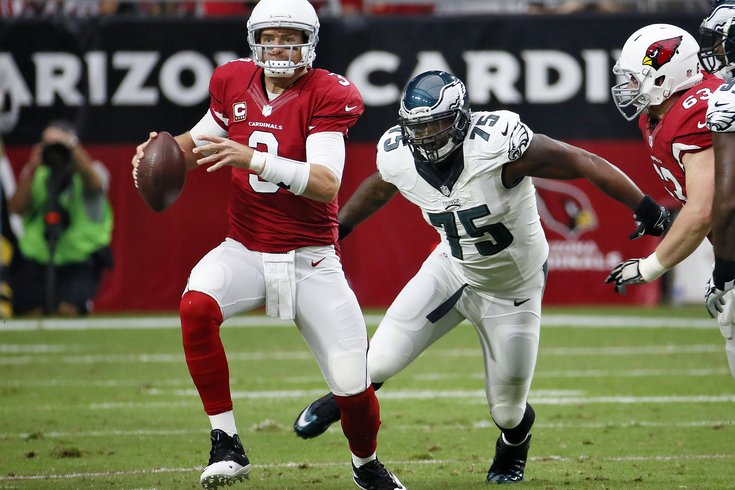 The Eagles need Vinny Curry's pass rush abilities against the Cards' down the field passing attack.

The Eagles remain extraordinarily healthy for the stretch run as their injury report includes 11 names, all of which are listed as "probable." Here's a look at the Eagles' and Cardinals' injuries, with analysis.

• Jordan Matthews (back): Matthews had just 3 catches for 19 yards and a long of 8 when he was listed as questionable a week ago.

• CB Byron Maxwell (ankle): Byron Maxwell was the only Eagle not to practice on Wednesday but he was a full participant on Thursday.

• NT Bennie Logan (knee): Logan was a late addition to the injury report a couple weeks ago against the Patriots when he was listed as "questionable," but he played anyway. Last week he was listed as probable, and played.

• DE Cedric Thornton (ankle): The Eagles were without Thornton two weeks ago, but were effective against the Pats' rushing attack anyway. The Eagels were able to effectively shut down LeSean McCoy after Thornton returned to the lineup.

• CB Eric Rowe (ankle): Rowe was targeted 13 times against the Pats two weeks ago in his first ever start against none other than Tom Brady, and he had a terrific showing. Against the Bills, Tyrod Taylor largely stayed away from Rowe. This week he'll face an enormous challenge against the best trio of wide receivers the Eagles will face all season.

• OG Matt Tobin (knee): Continuity along the OL is imperative against a team like the Cardinals, who blitz more than any other team in the NFL.

• DE Vinny Curry (illness): Curry was the only Eagle to miss practice on Thursday, with an unspecified illness.

• OLB Marcus Smith (hamstring): A couple weeks ago, Smith got his first career solo tackle on special teams. He's still looking for his first tackle with the regular defense.

Peterson and Powers are expected to play, per Ian Rapoport of NFL.com.

Good news for #AZCardinals DBs: CBs Patrick Peterson (ankle) & Jerraud Powers (calf) are both expected to play despite being questionable

Andre Ellington is not.

Cardinals RB Andre Ellington (toe), listed as questionable for tonight’s game, will not play vs. Eagles, per source. Could be back next week