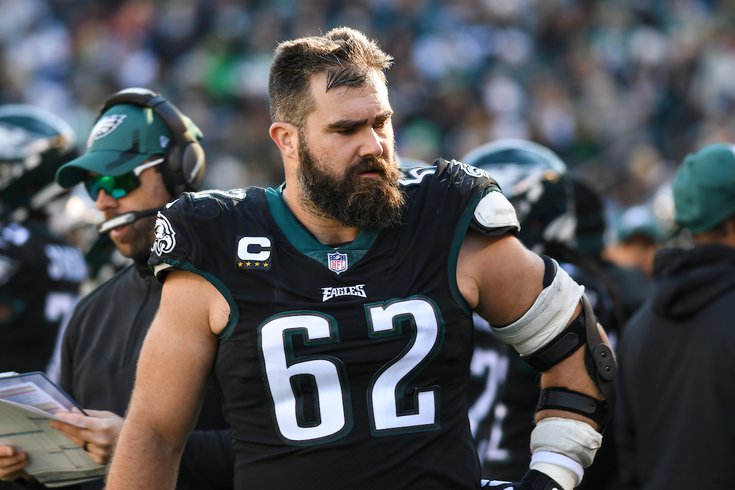 PHILADELPHIA - DECEMBER 26: Jason Kelce #62 of the Philadelphia Eagles looks on during the game against the New York Giants at Lincoln Financial Field on December 26, 2021 in Philadelphia, Pennsylvania.

The Philadelphia Eagles and All-Pro center Jason Kelce announced jointly on Thursday that Kelce is returning for his 12th NFL season in 2022.

Nick Sirianni had previously sent Kelce a keg of beer to convince him to keep playing, and Kelce incorporated said keg in his announcement.

And this was fun, from the Eagles:

Back to lead the way again in 2022 🙌#FlyEaglesFly pic.twitter.com/WC8movEywk

Kelce wasn’t under contract for the the 2022 season, so he presumably came to terms with the Eagles on a new deal. The continuation of Kelce's professional football career is a year-to-year decision, but he remains at the top of his game, and is still arguably the best center in the NFL. When you're the best in the world at something, it's kind of hard to give that up, even if that thing can take a long-term toll on your body.

Kelce’s announcement comes six days before the first day of the new league year, giving the Eagles ample time to finalize their offseason positional priorities, though the team very likely had a pretty good idea that he was always going to return.

The Eagles had one of the best offensive lines in the NFL a season ago, and they were the primary reason the team won the nine games that they did in 2021. With Kelce’s return, the Eagles won’t be forced to do substantial shuffling up front, and as Kelce said in his video, they can potentially “continue to dominate.”