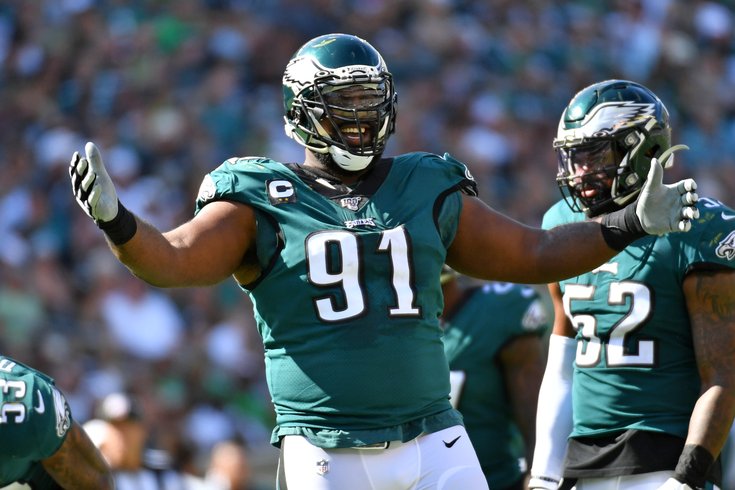 Fletcher Cox was limited in practice this week, but is expected to be a go on Sunday night.

If you were hopeful that the Philadelphia Eagles would suffer fewer injuries than they have over the last two seasons, they're off to a less than ideal start, after likely having lost starting Malik Jackson for the season with a Lisfranc injury.

• LB Kamu Grugier-Hill (knee): Grugier-Hill's Grade 3 MCL sprain will keep him out until sometime, ohhhh, around Week 3 or 4-ish. In Week 1, Nigel Bradham played every snap, while No. 2 linebacker fill-in Zach Brown only played 29 snaps.

• OT Jordan Mailata (back): Mailata would have likely been inactive for this matchup, even if healthy.

• QB Nate Sudfeld (wrist): It'll be interesting to see who the No. 2 quarterback is between Sudfeld and Josh McCown whenever Sudfeld returns. Sudfeld is the No. 2 on the Eagles' depth chart at the moment, though that's not exactly reliable. Still, the Eagles are in capable hands with McCown should Wentz need to come out, in the short-term, anyway.

Sudfeld practiced this week, but was a limited participant.

• DT Malik Jackson (IR): The loss of Jackson will hurt most when the Eagles force obvious passing downs, as the Eagles don't have a clear replacement for him in those second-and third-and-long situations. In the base defense, however, it's not as if the Eagles don't have depth at defensive tackle. Timmy Jernigan is a capable replacement who played well Week 1, after missing almost the entirety of the 2018 season with a mysterious back injury. The Eagles also have Hassan Ridgeway, who had a nice camp, and they added Akeem Spence off the street earlier this week.

The Falcons have not yet listed their final injury report, but the following four players were limited in practice on Thursday:

Sooooooo, not exactly a star-studded group.

• RG Chris Lindstrom (IR): Lindstrom was a first-round pick of the Falcons (14th overall) in the 2019 NFL Draft. He broke his foot Week 1 against the Vikings, and will be replaced in the lineup by Jamon Brown, who started games against the Eagles in 2018 with the Giants, and in 2017 with the Rams.