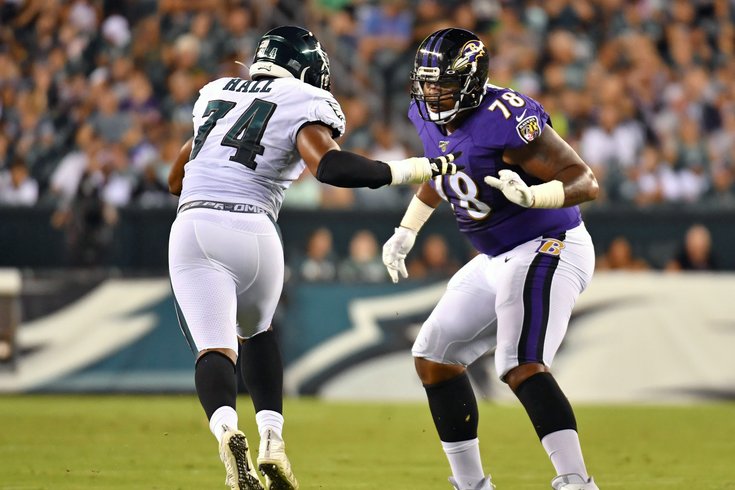 If you were hopeful that the Philadelphia Eagles would suffer fewer injuries than they have over the last two seasons, they're off to a less than ideal start, after likely having lost starting Malik Jackson for the season with a Lisfranc injury.

Here are the Eagles' and Falcons' inactives, with analysis:

• QB Nate Sudfeld: It'll be interesting to see who the No. 2 quarterback is between Sudfeld and Josh McCown whenever Sudfeld returns. Sudfeld is the No. 2 on the Eagles' depth chart at the moment, though that's not exactly reliable. Still, the Eagles are in capable hands with McCown should Wentz need to come out, in the short-term, anyway.

• OT Jordan Mailata: Mailata would have likely been inactive for this matchup, even if healthy.

• iOL Nate Herbig: If Jason Kelce goes down, Isaac Seumalo will move over from LG to C.

• DE Daeshon Hall: Last week, Sweat apparently played over Hall because he's better against the run. I'm not sure what the reasoning could be this week against a pass-oriented team in the Falcons.

• DT Malik Jackson (IR): The loss of Jackson will hurt most when the Eagles force obvious passing downs, as the Eagles don't have a clear replacement for him in those second-and third-and-long situations. In the base defense, however, it's not as if the Eagles don't have depth at defensive tackle. Timmy Jernigan is a capable replacement who played well Week 1, after missing almost the entirety of the 2018 season with a mysterious back injury. The Eagles also have Hassan Ridgeway, who had a nice camp, and they added Akeem Spence off the street earlier this week.

Our inactives for #PHIvsATL ⤵️

• RG Chris Lindstrom (IR): Lindstrom was a first-round pick of the Falcons (14th overall) in the 2019 NFL Draft. He broke his foot Week 1 against the Vikings, and will be replaced in the lineup by Jamon Brown, who started games against the Eagles in 2018 with the Giants, and in 2017 with the Rams.