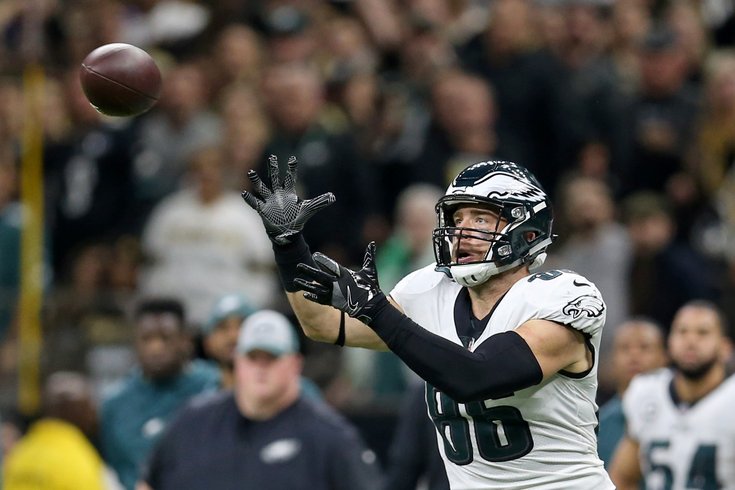 Zach Ertz is a PPR stud.

Fantasy football nerds like my cousin Ricky are already conducting mock drafts for their fantasy football season, which is crazy to me, but also partly why I have a job, so thanks!

Here we'll take a look at where the fantasy football nerds have Eagles players rated, using the consensus of 44 experts, rounded up at FantasyPros.com. (We'll use their PPR rankings.)

• Zach Ertz (2nd TE, 19th overall): Ertz is a PPR stud, as he's ranked 38th overall in standard scoring leagues. Obviously, he broke the single-season receptions record by a tight end in 2018. With DeSean Jackson now in the Eagles' offense, Ertz should have even more room to work the middle of the field. I think his receptions will go down, but his yards per catch will rise.

• Alshon Jeffery (20th WR, 43rd overall): Jeffery is a good player, obviously, but he's in an offense with four additional passing game weapons in Jackson, Nelson Agholor, Ertz, and Dallas Goedert. Last year, Jeffery saw 7.1 targets per game, which was 21st in the league. How many targets is he going to see with better players around him? He's being rated too highly, in my opinion.

• Jordan Howard (36th RB, 99th overall): Howard is too low. Yes, the Eagles have a committee approach, but Howard's competition for carries are an injured Corey Clement, and a rookie in Miles Sanders, who will have to prove he can pass protect, catch the football, and solve his fumbling issues before the team will rely on him. Howard should also get his fair share of red zone touches, and the Eagles believe he is a better receiver than most think.

• Carson Wentz (11th QB, 94th overall): Lol, what? People are sleeping. Actually, it's worse than sleeping. People are passed out drunk in a gutter. I mean, Jameis Winston is the tenth QB ahead of Wentz, lol. The upcoming season is set up for Wentz to thrive. It's all there for him — a very good group of receivers with varied skill sets, the best 1-2 tight end combo in the league, an elite offensive line, and an improved set of running backs.

Oh, and Wentz is also awesome, in case anyone has forgotten that. Does he have to remain healthy? Of course. But for fantasy football analysts to have him going in the 10th round is laughable. If you're in a local league, some homer will take him in the second. I certainly wouldn't suggest that. But if you're in a league with non-Eagles fans, wait to draft until, oh, say, the eighth or ninth round while others wrongly perceive him as some kind of mid-tier quarterback talent.

• DeSean Jackson (47th WR, 120th overall): Again, people are sleeping. For example, Texans speed guy Keke Coutee is rated ahead of Jackson, who is arguably the most prolific deep threat in NFL history. Coutee is entering his second season after a 28-287-1 rookie campaign. Jackson, by comparison, had 424 yards after his first four games in 2018. Because he has been in the league so long, Jackson has become something of a boring pick, somehow. Let the "I'm smarter than you" guys take lesser-known names like Coutee, while Jackson can be a bench guy capable of winning you games on his own when he has his occasional monster performances.

• Miles Sanders (42nd RB, 123rd overall): If you're willing to be patient and hang onto a player who may not get a lot of touches early in the season, Sanders could be a guy who eventually takes over as the lead guy, as long as he can make the Eagles staff feel comfortable by fixing some of his issues noted above.

• Dallas Goedert (23rd TE, 183rd overall): Goedert didn't play as much as he should have early in the season last year, but he was playing about 60 percent of the snaps down the stretch. If Ertz were to get hurt, Goedert would be a top-five FF TE, in my view. As is, he's certainly more valuable than the 23rd overall tight end. He's too good not to see the field a lot in 2019.

• Nelson Agholor (79th WR, 214th overall): Agholor is basically being viewed as a fantasy football UDFA. Over the last two seasons, Agholor is 21st among NFL receivers in receptions, 29th in yards, and tied for 17th in TDs.

• Eagles defense (16th DEF/ST, 228th overall): I have always drafted fantasy football defenses based on how much I think they'll affect opposing quarterbacks, because (a) you get those sacks numbers, but more importantly, (b) that pressure leads to turnovers and defensive touchdowns. The Eagles were a top five fantasy football defense because of their defensive line in 2017. They dipped in 2018 because they had like 30 corners get hurt. With Fletcher Cox, Malik Jackson, Brandon Graham, and Derek Barnett, I think they'll be closer to what they were in 2017 than what they were in 2018.

• Jake Elliott (7th K): That's about right. There are more accurate kickers, but the Eagles are going to score a lot of points.