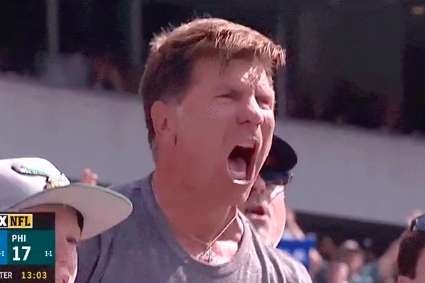 At the Eagles-Lions game on Sunday, a fan's reaction to what appears to have been a terrible call in the fourth quarter was caught by the FOX camera. The man was later found to be Eric Furda, dean of admissions at the University of Pennsylvania.

The Eagles' 27-24 loss to the Detroit Lions on Sunday was a clinic in how a team can trip over itself dozens of times, still have multiple unexpected chances to win, and lose anyway in front of a home crowd.

While the 1-2 Eagles prepare for a quick turnaround on Thursday night against the Green Bay Packers, fans are taking the day to process the Lions game.

The mood was summed up perfectly by one angry dude who was captured on one of FOX's cameras during the course of the game.

When someone brings over cheesesteaks but you really wanted roast pork pic.twitter.com/BEiB3F4tEy

That tweet shared by Deadspin elicited more than 100 comments. Some of them noted the presence of the young boy next to this man. Some said he looks like Will Ferrell. Some praised his passion.

And then a few pointed out that he's the dean of admissions at the University of Pennsylvania.

upenn's dean of admissions everyone

He is actually the dean of admissions at U Penn lol

That would be Eric Furda, who attended Penn himself and was a four-year letterman on the varsity lightweight football team. He was the team's captain and MVP during his senior year in 1987.

Most people don't associate Ivy League administrators with vein-popping hysterics, but Furda is a reminder not to stereotype.

If you read his lips in the video, it looks like Furda says, "What the f*** are you looking at?" That would imply he was upset with a call or a non-call. (Miles Sanders will surely be looking back at this game with frustration — literally, because his head was completely twisted around on a blatant facemask penalty that wasn't called, but all he'll see is two fumbles).

Furda took to Twitter and accepted a penalty of his own.

Bottom line is that calls were missed that were basic and also in place for player safety! Not sure what the refs were looking at today!

After further review of the play I will take the 15 yard penalty for unsportsmanlike conduct But I will not lose my passion for Philadelphia and Penn sports! Thanks for all the interview requests but we have a game on Thursday to get ready for which I will watch at home!

Even when the Eagles lose, Philadelphia always finds a way to unite around a good laugh.