Eagles LT Jordan Mailata has a knee sprain; status for Monday night vs. Cowboys in question 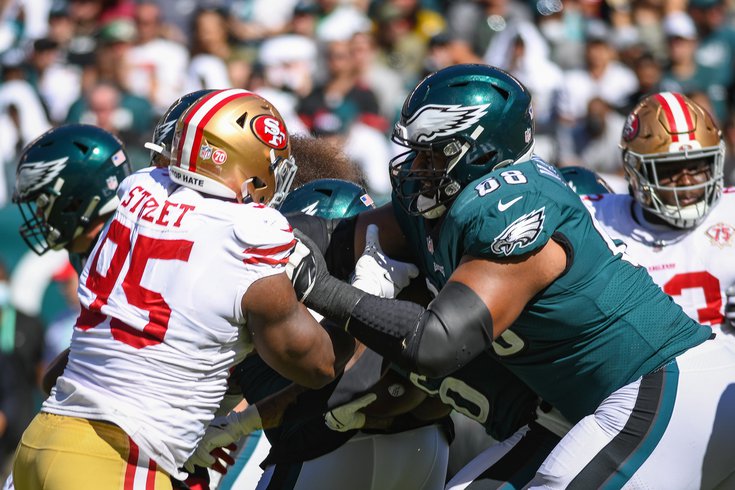 PHILADELPHIA - SEPTEMBER 19: Jordan Mailata #68 of the Philadelphia Eagles blocks during the game against the San Francisco 49ers at Lincoln Financial Field on September 19, 2021 in Philadelphia, Pennsylvania. (Kate Frese for PhillyVoice)

Philadelphia Eagles starting LT Jordan Mailata did not practice on Friday due to a sprained knee suffered in practice on Thursday, and his status for Monday's night's matchup against the Dallas Cowboys is in question.

If Mailata can't go, Andre Dillard would get the start. Mailata and Dillard entered training camp as competitors for the starting LT job, but it became obviously and immediately apparent that Mailata was going to win that "competition," as Mailata excelled, and Dillard struggled.

Just before the start of the season, Mailata scored a lucrative new contract extension, and he has played very well in each of his two starts so far this season, notably Week 2 against Nick Bosa.

As we noted in our "five matchups to watch," the Eagles' biggest matchup advantage, by far, is their offensive line against Dallas' severely depleted defensive line. That edge would be negated to some degree if Dillard has to start in favor of Mailata. The change would almost certainly force the Eagles to rethink protection strategies, as they would seek to give Dillard easier responsibilities and added help.

The Eagles will also be without starting RG Brandon Brooks, who suffered a pectoral strain during the Eagles loss to the 49ers last Sunday. He was replaced in the lineup by Landon Dickerson, who Nick Sirianni said on Thursday would start in Dallas.