Looking ahead to Week 3's odds, lines, over/unders in the NFL, including Eagles v. Cowboys 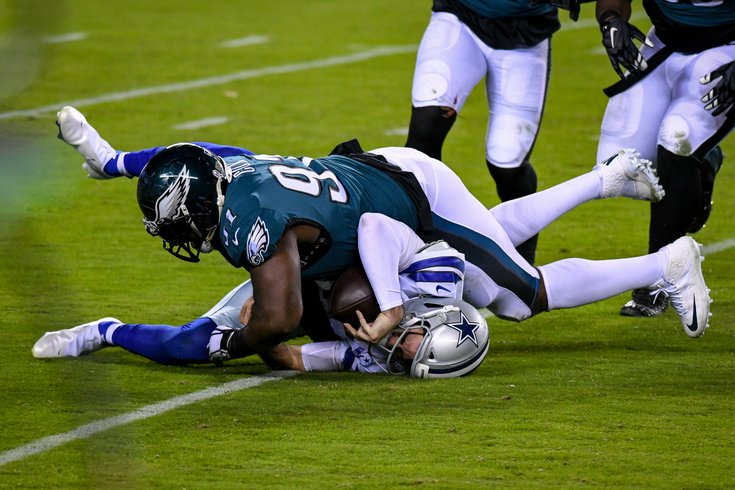 Fletcher Cox sacks Ben DiNucci during the Philadelphia Eagles game against the Dallas Cowboys at Lincoln Financial Field in Philadelphia on November 1, 2020.

With just two weeks under wraps, the AFC is down to two undefeated teams — with the NFC boasting five.

Just one battle of unbeaten teams will take place in Week 3, which means that six of the seven could survive. In a week with a bevy of one-sided matchups and spreads over one touchdown, let's take a look at the line and over-unders for the upcoming slate of action. All lines and over-unders come courtesy of sidelines.io.

The Texans will be relying on Davis Mills to man their offense after losing Tyrod Taylor to injury (and Deshaun Watson for off-field issues). The Panthers should roll here and their already impressive defense could shine once again.

The Bills bounced back in a big way after an opening week upset loss, and should be able to build off their monster 35-0 win in Week 2 against a Washington team already on its second quarterback with Ryan Fitzpatrick on the IR.

We have another big home favorite here, as the Browns hope to have a healthy return from Odell Beckham Jr., a week after losing Jarvis Landry. Chicago may or may not start Justin Field here with Andy Dalton hurt.

Here's our fourth straight touchdown-plus line, as the Ravens look to keep the momentum going from their upset win over the Chiefs against a Detroit team still hunting for a win.

The Cardinals should probably be favored by double-digits here, but flying to the East Coast is probably an advantage for Jacksonville. Arizona has perhaps played the best football of any NFL team so far.

Kansas City looks to bounce back, but it won't be easy against a high-powered Los Angeles offense. This one could be a shootout.

Finally, a line closer than a field goal. The Saints fell to earth in Week 2 after a huge Week 1 statement win against the Packers. The Patriots have the edge with their stout defense at home.

In a battle between two teams that could be picking in the top five next April, New York is favored as each team hunts for win No. 1 on the year.

Neither offense has been lights out as these two division foes get set to do battle in Pittsburgh. The Steelers and Ben Roethlisberger could feast on a weak Cincinnati secondary in this one.

We currently don't know who'll be playing quarterback for the Colts, as Carson Wentz tries to play through not one but two ankle injuries. Look for the Titans to try and make that irrelevant anyway, as they'll let Derrick Henry go to work again.

With the lowest over-under of the week, this battle between teams not expected to make the playoffs could be a struggle to watch.

The Dolphins have been less than stellar, though they did upset the Patriots in Week 1. The Raiders have impressed, beating two quality teams to start the year. At home, the Raiders may actually have their easiest game of the year in this one.

This is easily the marquee matchup of Week 2. It's completely possible that this is a preview of the NFC Championship game in January. Sit back and enjoy what is essentially a pick-em.

Perhaps the second best game of Week 2 is on at the same time as the Bucs and Rams, but two more-potent NFC offenses will play as Russell Wilson and the Seahawks try and turn the page after blowing their Week 2 game.

Somehow, Green Bay is not favored after Aaron Rodgers' masterful performance on Monday Night Football. Yes, it's a short week and they're on the road, but the 49ers have been hit hard by the injury bug and could see this line sharply swing the other way by Sunday.

The Eagles and Cowboys don't have to wait long to do battle, as the rivals will take the stage in primetime on Monday. The Cowboys are favored at home after a tight win in Week 2, while the Eagles have played better than expected despite falling to the 49ers last week.