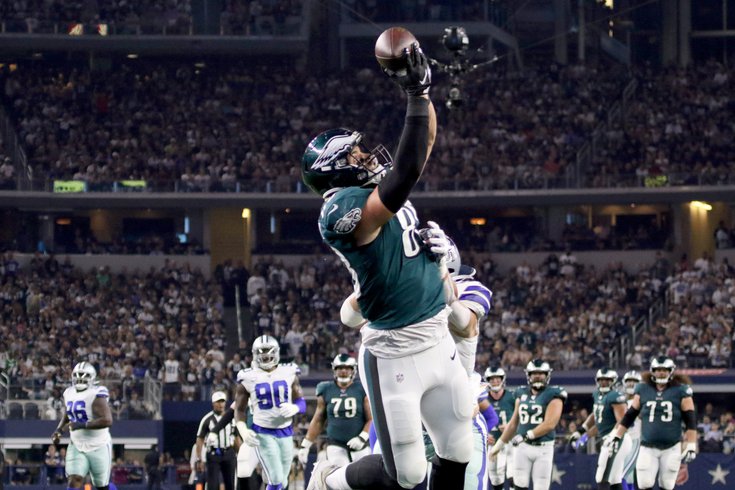 The Eagles need to start working the middle of the field with Dallas Goedert.

The Philadelphia Eagles have their first big game of the 2021 season, as they'll face the Dallas Cowboys in front of a national audience on Monday Night Football. Here are our five matchups to watch.

1) The Eagles' beefy offensive line vs. the Cowboys' light and depth-challenged defensive line

The Cowboys' defensive line is in bad shape. DE DeMarcus Lawrence and DT Neville Gallimore are on injured reserve, while DE Dorance Armstrong and DT Carlos Watkins have already been ruled out. As such, they were forced to move starting LB Micah Parsons to DE last week.

In theory, the Eagles should be able to move bodies off the line of scrimmage. Cowboys HC Mike McCarthy even acknowledged that the size differential is a concern.

"It’s definitely a matchup that we’re giving a little extra focus on because of our injuries," McCarthy said. "I think if you look at the layout of our roster, we felt really good about our depth and defensive line. It’s a huge challenge against this massive offensive line. That’s our approach to it... I have a lot of respect for their offensive line. They’re healthy for the most part and they got those tackles rolling. I’m just trying to focus on the different combinations of who we're going to play and how we’re going to play against those guys."

A season ago, the Cowboys were abysmal at stopping the run:

If there's one area where the Eagles have to dominate in this game in order to win, it's in the trenches offensively.

2) Dallas Goedert vs. the Cowboys' linebackers

Goedert has had some big games against Dallas:

Zach Ertz has COVID, so his availability on Monday is in doubt. Whether Ertz plays or not, the Eagles could really use a good showing from Goedert. Because Parsons will likely move from LB to DE as noted above — and because Keanu Neal could be out, or at least not 100 percent this week — the Cowboys may once again be rolling with Jaylen Smith and Leighton Vander Esch at LB. They were a dynamic duo a few years ago, but not so much anymore.

Jalen Hurts has almost completely ignored the middle of the field in his first two games.

Through two weeks, 64% of the passes Jalen Hurts has thrown beyond the LOS have targeted the right side of the field pic.twitter.com/jAUZmiL3NM

That has to change or this Eagles offense will be too easy to defend.

3) The Cowboys' explosive play potential vs. the Eagles' secondary

The Cowboys won't have their trio of receivers for this game, as Michael Gallup is on IR, but they still have CeeDee Lamb and they should have Amari Cooper, who injured his ribs Week 2.

So far this season under Jonathan Gannon, the Eagles have only allowed one pass play of over 20 yards, a damaging 40-yard strike to Deebo Samuel that set up a Niners TD just before the end of the first half.

"The one that happened over 20, I wish I had that call back because I think I could do a better job of putting our guys in a better call to not allow that," Gannon said. "But, we've talked about it since we've gotten here, is explosive plays is a winning stat, winning or losing stat, as takeaways are. And our head coach, we continue to preach that every day with our guys.

"I think that why you see that right now – and we can get better at that, as well – but I think these last two games, what you're seeing is guys being in the correct spot and playing the coverages the correct way. And, it really comes down to execution in the call and we're executing those calls not to allow explosive passes.

"You know, we show our guys on tape all the time, a lot of people get frustrated with a six or eight-yard pass play. And it's important for our guys to understand that's a win for us on certain plays. Certain plays it's not. But certain plays in the course of a game, if we make them check it down and get eight, that's a win for us. And our guys are – our coaches and players have a very clear understanding within certain coverages where we want the ball to go and what is acceptable."

The Cowboys' offense can beat you in a variety of ways. They can make the big play, or they can methodically drive the field on you. The latter is preferable. Make them play near-mistake-free football for 10-12 plays, and force them to earn field-tightening red zone scores, instead of the devastating quick strike.

4) The Cowboys' run game vs. the Eagles' run defense

Ezekiel Elliott isn't close to the runner he once was, but the combination of Zeke as the hammer, and the now more explosive Tony Pollard can be a potent 1-2 combo.

The Eagles were very good stuffing the run on Sunday against the 49ers, but San Francisco began having success on toss plays that avoided the Eagles' DTs instead of trying to run through them. It will be interesting to see if the Cowboys copy that approach, and how Gannon adjusts.

The Eagles won't have to worry about Dak Prescott as a runner they way they used to. He does not yet look like the same player as a runner after his gruesome injury a season ago.

Each week we point out the trouble spots along the opposing team's offensive line. The Cowboys currently have two. The first is at RT, where La'el Collins is suspended for five weeks for violating the league's policy on substance abuse. Collins' replacement is Terence Steele, who had brutally bad day against the Eagles in Philly last season.

Steele will catch a break with Brandon Graham unable to go feastin'.

Asked how Graham's spot would be filled, Gannon gave no clues. "Other guys are going to have to step in and fill where he was playing at, and we feel good about the guys that are going to do that," he said.

Milton Williams could earn some snaps in that spot along with Ryan Kerrigan, and the Eagles could also have Josh Sweat and or Derek Barnett swing to the left side on obvious passing downs.

The other troublesome spot along the Cowboys' offensive line is Tyler Biadasz, at center.

That is Vita Vea taking 6-4, 318-pound NFL center Tyler Biadasz on a trip to see his quarterback pic.twitter.com/Ck2jFxi629

Gannon will have to get creative in finding ways to get one-on-ones with Fletcher Cox or Javon Hargrave against Biadasz.