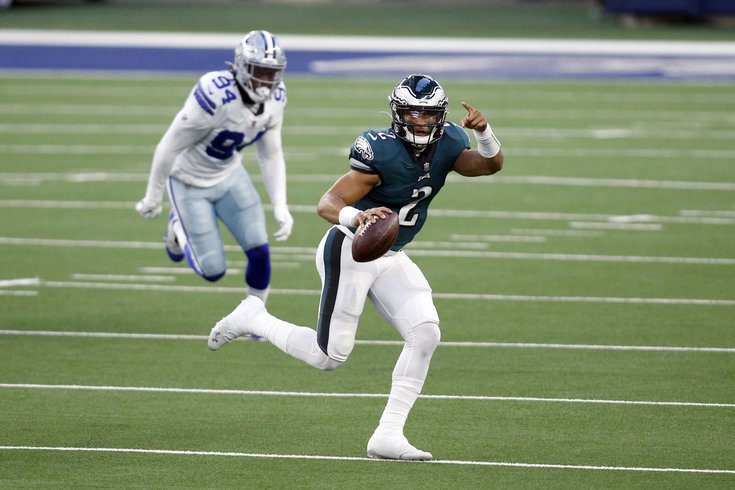 For the gambling enthusiasts, here are my Week 3 NFL picks. To note, the team logos indicate who I think will win the game, not cover the spread. At the end of the picks, I'll note a few teams that I like based on the spread — with all lines coming via Sidelines.io.

Panthers (-8) at Texans: The Texans entered this season as the joke of the league, picked by many to have the No. 1 overall selection in the 2022 NFL Draft, but they really haven't been that bad. They legitimately smoked the Jaguars Week 1, and they hung in there with a good Browns team deep into the fourth quarter in Week 2.

The line is eight points, however, because the Texans will start rookie third-round quarterback Davis Mills, with Tyrod Taylor headed to IR. Mills was 8 of 18 for 102 yards, a TD, and an INT in 33 snaps against the Browns last week. He also fumbled, but it was recovered by the Texans. Also, take this for what it's worth, but in his Week 3 preseason game against Tampa, Mills went 10 of 27 for 106 yards, 2 TDs, and 3 INTs. Ew.

I really wanted to take the Texans and the points, but I just can't hitch my wagon to Mills.

Football Team at Bills (-7.5): The Bills seem to be back on track with a 35-0 pasting of the Dolphins last week after a disappointing Week 1 home loss to the Steelers. I do have some concerns about Buffalo's offensive line against what is supposed to be a dominant WFT front, but that front has just been OK so far this season.

The Bills are Super Bowl contender, and the Football Team is, uh, not.

Bears at Browns (-7): Justin Fields will make his NFL starting debut in this game, though the Bears insist that he's only keeping that starting role warm for whenever Andy Dalton is ready to return. If not for a punter who could not catch a snap Week 1, the Browns would have probably beaten the Chiefs Week 1 and would be sitting pretty at 2-0. I like their chances against a rookie quarterback that the Bears themselves don't believe in yet.

Ravens (-8) at Lions: Could this be a trap game for the Ravens, sandwiched between an emotional win Week 2 in Kansas City, and a trip to Denver to face the likely 3-0 Broncos Week 4? Nah. Interesting stat, via Jameson Hemsley of ESPN:

The Ravens also tend to pour it on more than most teams in the NFL. They won nine games by more then eight points both in 2019 and 2020. They also won eight games by at least eight points in 2018. I don't often like laying a lot of points in the NFL, but this is a very bad Lions team. I'll lay the eight here because the Ravens crush bad teams.

Colts at Titans (-5.5): The Titans have allowed the third-most points in the NFL (68) through two games, after a year in which they gave up 439 points (27.4 per game). In fairness, they had to chase Kyler Murray and Russell Wilson around in those two games. In Week 3, they'll face one of two statues in Carson Wentz or Jacob Eason.

The Colts are in big trouble if Eason has to start. He did not look good in relief of Wentz last week.

Jacob Eason comes into the game, cold as can be, and immediately throws it in the direction of the best corner in the game. As expected, it went terribly pic.twitter.com/z3KX1hHNoC

But even if Carson Wentz and his two sprained ankles are good to go for this game, he won't be 100 percent, and, I mean, he isn't good if healthy anyway. I like the Titans' chances of being good enough to allow their offensive firepower to outscore the Colts. And let's go ahead and lay the 5.5 points while we're at it.

Chargers at Chiefs (-6.5): The loser of this game will be 1-2 with a head-to-head loss to the other (duh), and they could also be two games back from the Broncos and Raiders, who could very well both be 3-0 after Week 3. The Chargers unfailingly disappoint every season, so let's just get on with it.

Saints at Patri*ts (-2.5): The Patri*ts intercept a lot of passes, and Jameis Winston throws a lot of interceptions. 🤝

Falcons at Giants (-3): Both of these teams are trash. The Giants are somewhat less trash. I actually kinda like the Giants to cover here. If they lose to this horrid Falcons team, it's going to get really ugly for Joe Judge and Dave Gettleman.

Jets at Broncos (-10.5): The Broncos' first two games this season were against the craptastic Giants and the horrid Jaguars, both of whom they took care of easily enough on the road. They should get to 3-0 against the Jets. What an easy start to their season. Seeing as they proved capable of handling the cupcakes on their schedule the first two weeks, I like the Broncos as a survivor play in Week 3.

Dolphins at Raiders (-4): Tua Tagovailoa is out for this game, and Jacoby Brissett will fill in. Honestly, Brissett might be better than Tua, but neither QB is ideal. The Eagles' 2022 first-round pick from the Dolphins is looking good.

Buccaneers (-1.5) at Rams: This is a high-stakes matchup between a pair of teams fighting to be No. 1 in my NFC Hierarchy. I'll take the home team and the points, with very little confidence.

Seahawks (-2) at Vikings: The Vikings might be 2-0 if not for a missed 37-yard field goal at the end of regulation Week 2, and a Dalvin Cook fumble as the Vikings were entering field goal range in overtime against the Bengals Week 2. This isn't a bad team. I'll take 2 points at home with a team that has their backs against the wall.

Packers at 49ers (-3.5): This line indicates that the oddsmakers believe that the 49ers are slightly better than the Packers, and I just don't see that. The 49ers were unimpressive Week 2 against the Eagles, and only won that game because the Eagles had costly, self-inflicted mistakes in inopportune moments.

In the past, the Niners have had some impressive wins over the Packers on the strength of their rushing attack. However, their top five running backs are all injured. Meanwhile, as we pointed out repeatedly during the lead up to their Eagles matchup, the Niners' cornerback situation is in really bad shape, as they were forced to start fifth-round rookie Deommodore Lenoir and a washed Josh Norman. They got away with that starting duo against the Eagles. It'll be a much stiffer challenge against Aaron Rodgers and the Packers.

I'll take the Packers to win outright, oh and I also get 3.5 points? Yes, please.

Eagles at Cowboys (-4): I don't normally like to make Eagles picks until I've had a chance to write my "5 matchups" post, and since I haven't done that yet because of my altered Monday night game writing schedule, we'll delay making this pick until later today. Also, I'd like to get a peek at each teams' initial injury report. Leaning Cowboys. 🤷‍♂️

In hindsight, I probably should have written the "5 matchups" post first. I'll go back and look at the tape and be better next time.

Update: Now that I've had a chance to catch up on the Cowboys, I'm ready to pick... the Cowboys.

The Eagles have some matchups in their favor in this game, most notably their offensive line against an undersized and undermanned Cowboys defensive line. On paper, it's a significant advantage for the Eagles, and if it's one that they can dominate, they have a great chance of winning this game.

It's the rest of the matchups that are concerning. Can the Eagles' wide receivers be more consistent? Can Jalen Hurts stand out on his own without the need for a new-but-different game plan that avoids exposing his weaknesses like it did in Week 1? Can Brandon Graham's replacement(s) take advantage of a matchup against a backup RT? Can the defense continue to limit big plays, and big numbers on the scoreboard? I'm not certain about any of that.

What I am reasonably sure of is that the Cowboys have a really good offense, and that's probably good enough, for now, to handle an Eagles team that is finding their identity under a new staff, in primetime. It's close, but Dallas has the better team right now.

To note, I went 0-5-1 ATS last week, so maybe don't listen to a thing I have to say until I get my bearings once again.