Eagles DT Javon Hargrave is a beast, with gifs and stuff 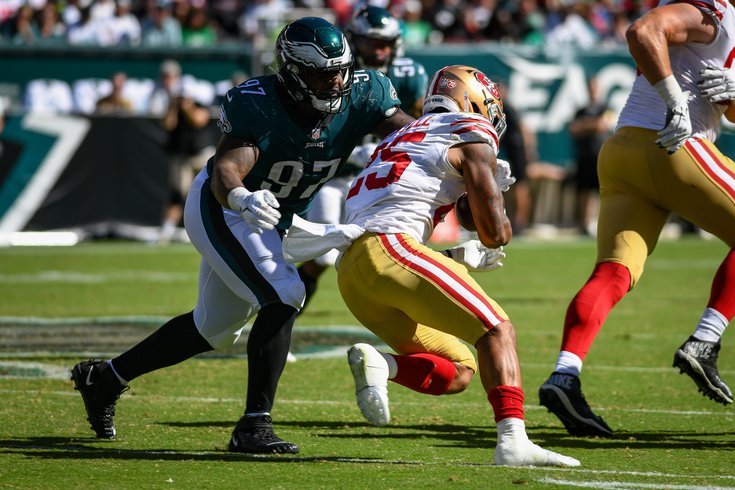 PHILADELPHIA - SEPTEMBER 19: Javon Hargrave #97 of the Philadelphia Eagles goes for a tackle during the game against the San Francisco 49ers at Lincoln Financial Field on September 19, 2021 in Philadelphia, Pennsylvania. (Kate Frese for PhillyVoice)

Through the first two games of the season, the Philadelphia Eagles' best player has been DT Javon Hargrave. So far, he has 12 tackles (four tackles for loss), two sacks, and four hits on the quarterback.

During the 2020 offseason, Hargrave signed a three-year, $39 million contract in free agency with the Eagles. After missing pretty much all of training camp with a pectoral injury and later a hamstring injury, Hargrave was invisible for the first 10 or so games of the season, before turning it on in December.

In 2021, Hargrave was healthy for camp, and he dominated from start to finish, which has carried over into the regular season. Let's take a look at some of his highlights so far this season, in gif form.

One of the bigger surprises about Hargrave's game this season has been how quick he has been. At 6'2, 305, he has a squatty, powerful frame, but he can also leave interior offensive linemen in the dust. For example, this hit on Matt Ryan:

Or this sack of Ryan:

Here he wins with a combination of power and hand fighting, but watch his explosiveness when he shakes free and finishes.

And then my favorite example of Hargrave's quickness is this play, where he makes the LG completely whiff, he spins back toward the runner, locates him, and brings him down.

And yes, he can win with power. Like here:

But he also plays under control, and with awareness

Of course, some guys who are making plays in the backfield do so at the expense of being assignment sound. Think Jason Babin and Michael Bennett here, for example. That's not Hargrave. He has also been excellent as a two-gapping DT, in which he'll engage with an offensive linemen and control the gap on each side. Like here:

Watch him sniff out the screen here:

And watch how he has a beat on the snap here, and the center has no chance of blocking him:

If he keeps this level of play up over the course of the season, he's going to be First-Team All-Pro.