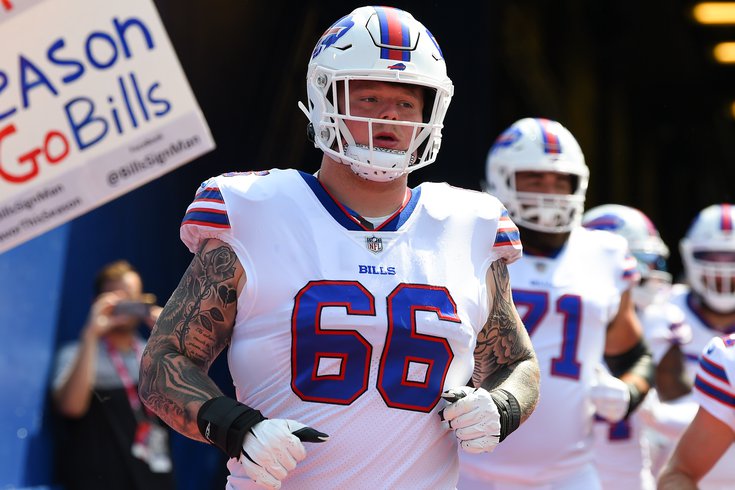 This is Jack Anderson.

As expected, the Philadelphia Eagles placed Brandon Graham and Brandon Brooks on injured reserve on Tuesday.

As we reported on Monday, Graham's season is over with a torn Achilles suffered during the loss to the 49ers on Sunday. Brooks suffered a pectoral strain. He left the game, did not return, and was replaced at right guard by rookie second-round pick Landon Dickerson. The pectoral strain should be regarded as positive news, at least in terms of the alternative, which was a potentially season-ending pectoral tear. Brooks will have to remain on injured reserve for at least three weeks.

Taking Brooks' spot on the 53-man roster will be Jack Anderson, who the Eagles signed off of the Buffalo Bills' practice squad. The Bills selected Anderson with a seventh-round pick (236th overall) in the 2021 NFL Draft. Anderson did not make the Bills' initial 53-man roster, but he was re-signed back to their practice squad.

Anderson was the 52nd highest rated high school player in the country (via ESPN recruiting) when he committed to Texas Tech in 2017. He played four years there, making 38 career starts, all at right guard. Here's his scouting report, via Dane Brugler of The Athletic:

Anderson is strong and nimble with the mean streak desired for trench work, but he plays too upright and his lack of length lowers his margin for error. He projects as a potential backup guard/center in a zone-based scheme.

And the obligatory spider chart:

As you can see, Anderson has average athleticism, and T-Rex arms. Anderson will likely be inactive on Monday against the Cowboys as he gets up to speed in a new city.

The Eagles still have one open roster spot.