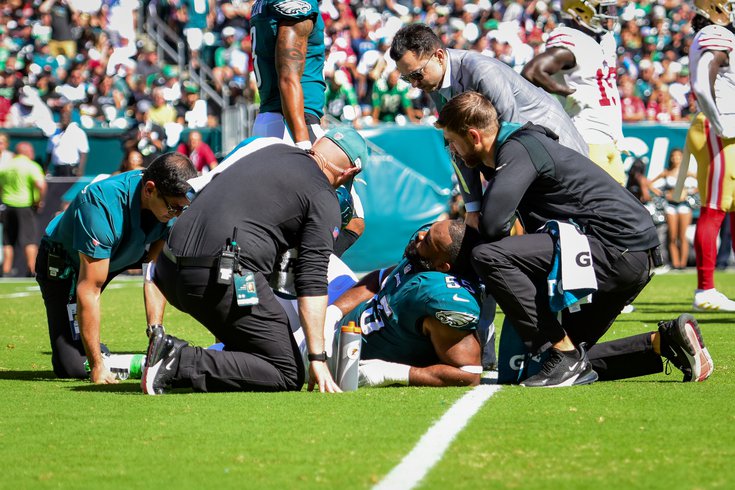 Brandon Graham's season is over.

Graham's season is over, as Sirianni confirmed that Graham ruptured his Achilles. On the field, Graham was arguably the Eagles' best defensive player in 2020. Off the field, Graham has unlimited energy and positivity, and he is a player that you just want to have around if you're a head coach in the NFL. His personality was no doubt very useful this offseason to a new and unestablished head coach like Sirianni, and first-time defensive coordinator Jonathan Gannon. Sirianni called Graham the "heart and soul" of the team.

The Eagles still have some depth at defensive end, but it will be interesting to see how they use it. Throughout training camp, Graham and Ryan Kerrigan mainly played on one side (typically the left side) of the line, while Josh Sweat and Derek Barnett played on the right side. To be determined if Sweat and/or Barnett will get snaps on the left side, or if rookie DE/DT Milton Williams will take on a bigger role as a direct replacement for Graham. It will probably be a little of both.

The news was a little better for Brooks, who suffered a pectoral injury. It's "only" a pec strain, as opposed to a tear, so while he'll likely miss time on injured reserve, it's not a season-ending injury. 2021 second-round pick Landon Dickerson filled in for Brooks on Sunday. (We'll have more on Dickerson's play later in the week.)

The other injury that was announced during the game was a calf injury for Davion Taylor. A calf injury — presumably related — caused Taylor to miss the bulk of training camp. Sirianni said that Taylor is "day to day." Taylor only played nine snaps in the regular defense on Sunday, but without having re-watched the game yet, he seemed to be active.

In addition to the above injuries, the Eagles announced that they were adding tight end Zach Ertz to the COVID reserve list, leaving them a bit thin at the position: