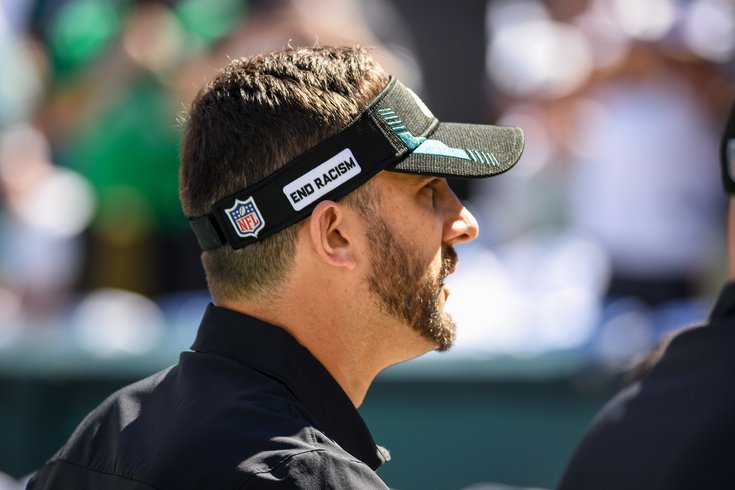 The Philadelphia Eagles' first full capacity home game since the 2019 season began with such optimism, and then... (fart noise). In the end, it was a 17-11 loss to the San Francisco 49ers. As always — win, lose or tie — we hand out 10 awards.

In the middle of the second quarter, the Eagles got a huge play when Jalen Hurts found Quez Watkins deep down the sideline for a 91-yard strike. Watkins was tackled at the 3, but the Eagles would eventually get a 1st and Goal from the 1 after a pass interference penalty on Josh Norman in the end zone.

You know what works in those situations? QB sneaks! Even if you get stopped, sneaks almost never result in a loss of yardage, so the downside is extremely minimal. Oh, and hey, your quarterback can squat over 600 pounds.

Instead, Nick Sirianni called four plays that failed to get the Eagles into the end zone, a sequence that may have very well cost them the game. While Sirianni took accountability for not calling good plays during that sequence, he explained that he did not want to sneak from a full yard away, as opposed to a situation later in the game when they only had inches to go.

The Eagles need to get an analytics nerd to explain to Sirianni the likelihood of scoring a TD on however many sneaks it takes from 1st and Goal from the 1.

Of course, the most noteworthy play from the devastating four-down series above was the failed 4th and Goal "Philly Special" call.

In recent press conferences, Sirianni has worn Phillies apparel, a Jalen Hurts shirt, and even an Allen Iverson shirt during pre-game warmups against the Niners. 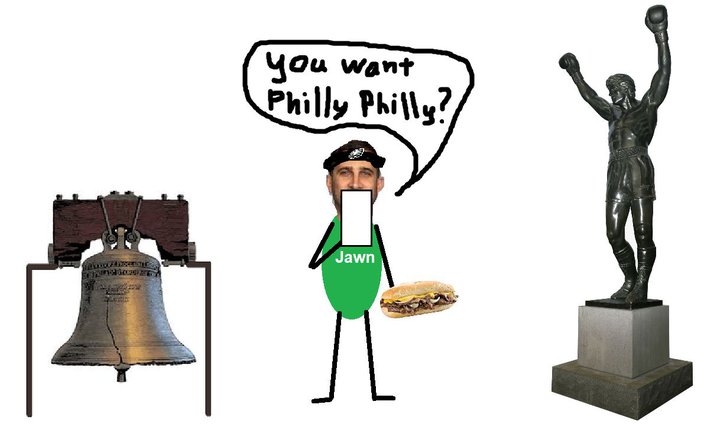 Was Sirianni pandering a bit with the Philly Special call? I can't say what was in the man's heart when he made that call, but I don't think it's a stretch to suggest that he got a little too cute in that spot. Here's the play, if you want to relive it:

On a side note, what was Greg Ward doing on the play? Was that a throwaway? He might have at least had a fighting chance if he tried to run it in.

3) The 'Can't Give Them Life' Award: The Niners' subsequent drive

After the failed sequence on offense, the Niners marched 97 yards in 12 plays and scored a touchdown just before the end of the first half. Really, the Eagles' defense had a good day, if we're being objective. They only gave up 306 yards and 17 points to a team that exploded for 41 points the previous week.

But that long drive — and another 16-play, 92-yard drive in the second half — were backbreakers.

During the 12-play, 97-yard TD drive, the Eagles lost Brandon Graham, who Lane Johnson described as the "heartbeat" of the team. Graham is reportedly done for the season with an Achilles tear.

The Eagles also lost Brandon Brooks, who left with — and did not return from — a chest injury. "Chest injury" sounds like pectoral injury. Post-game, while Sirianni sounded dejected over Graham's injury without committing to the severity of it, he seemed a little more genuinely unsure of Brooks' status going forward.

Reagor made a nice play down the sideline on what was initially ruled a TD, but was called back because he stepped out of bounds prior to catching the pass.

Asked whether there was something to be learned by Reagor on that play, Sirianni acknowledged that he should not have run his route that close to the sideline.

Nick Sirianni was asked what the teaching point is for Jalen Reagor after the WR stepping out of bounds negated a touchdown.

Sirianni said it’s about saving room on the sideline with how you release. So, even if you get bumped, you don’t go out. #Eagleshttps://t.co/mQHauqxSwA

Later in the game, on a 3rd and 10, Reagor ran an ugly looking out route, and seemingly was unaware that Hurts might throw his way.

Reagor has talent, so when he puts up a stat line of 5 targets, 2 receptions, and 5 yards, it's frustrating to watch.

6) The 'Some Good, Some Bad' Award: Jalen Hurts

Hurts made some really nice throws, notably his deep balls to Reagor and Watkins, but he probably relied a little too much on making plays with his legs in this game, and it felt like the ball was slow to come out at times. Ultimately, when the team only scores 11 points, some of the blame is going to fall on the quarterback.

Early in this game, the Eagles' defensive line, particularly Javon Hargrave, was dominating. But give the Niners credit. They adjusted and their toss plays to the edge were effective.

These toss plays have been effective for SF. Negates the DTs.

Running around the Eagles' DTs instead of trying to go through them was a good idea 💡, and something that other teams will copy when facing the Eagles going forward.

8) The 'Not So Special' Award: The Eagles' special teams

Jake Elliott's blocked FG didn't look like it had good enough trajectory on it, and Zech McPhearson made a brutally bad play when he jumped onto a ball that was sitting inside the five yard line, knocking it into the end zone for a touchback. The Eagles had a great special teams outing last week in Atlanta. Not as much on Sunday.

The Eagles, Colts, and Dolphins all lost today, which will help with the Eagles' draft positioning next year. Of course, it's worth noting that Carson Wentz suffered an ankle injury and did not return, so that's something to monitor.

The Dolphins looked particularly bad. They lost 35-0 at home to the Bills.

As Hurts put it, the Eagles won Round 1, and lost Round 2.

Round 3 is in Dallas next Monday.

MORE: The good, bad and ugly from the first half of Eagles-Niners