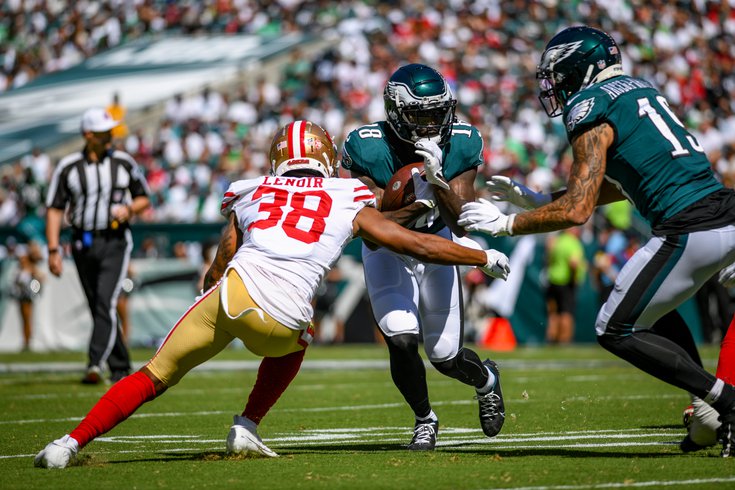 Eagles wide receiver Jalen Reagor runs after a catch against the 49ers.

The Eagles played an excellent half of football in their home opener but are down 7-3 to the 49ers after a huge closing touchdown for San Francisco, and injuries on both the offensive and defensive lines loom large for Philadelphia in the second half.

Here's what I saw in the opening 30 minutes.

• It was hard to focus on anything else early on aside from the noise at Lincoln Financial Field. You can tell the fanbase has been waiting for an opportunity like this one for quite a while, and it was a borderline perfect day to welcome a full crowd back — a beautiful morning for tailgating, the Eagles coming off of a dominant win in Week 1, and optimism as high as it could possibly be to welcome Nick Sirianni's Birds to open their home schedule.

Hearing the roar of the crowd during every big moment, beginning with pregame introductions and carrying into the game, is one of those things you don't realize how badly you miss until you go without it for a long time. Football doesn't feel like football in Philadelphia without tens of thousands of people going absolutely ballistic, and I have learned to treasure these moments as we have them over the last year-and-a-half.

• Javon Hargrave might have jumped offsides and gotten away with it on the first play of the game, but hot damn did he make the most of it. Hargrave absolutely bulldozed through the middle of San Francisco's offensive line, laying a big hit in the backfield to fire up an already delirious Philadelphia crowd. You could not have drawn up a better start for the home opener:

Last week @Jay_MostWanted became the first Eagles DT to record 2.0 sacks in a season opener since 1986

When a fanbase is this fired up, you run the risk of a big letdown if you don't come out ready to rip. Nobody could accuse the defense of whiffing on the opportunity.

• Perhaps the biggest and most important takeaway from the first two weeks of Eagles football — Philadelphia is winning the battle at the line of scrimmage. They struggled up front a bit in the opening 15 minutes against Atlanta, but otherwise they have been superior in the trenches on both sides of the ball. With a young and developing quarterback on offense and question marks in the secondary, winning those battles is critical for their success.

The aforementioned Hargrave has been a huge part of that for the defense, and he played what was probably his best 30 minutes as an Eagle in the first half on Sunday. No. 97 was absolutely wrecking shop, including on a late first-quarter play where he was clearly held around the neck and still almost managed to sack Jimmy Garoppolo before he dumped the ball off to his running back. Hargrave playing at this high of a level has made life easier on everybody else, with edge rushers like Josh Sweat benefitting from the attention he's drawing in the interior.

Philadelphia's big boys on the other line are simply picking up where they left off when they were last healthy and together, admittedly with a new entrenched left tackle in Jordan Mailata. When the Eagles loaded up to take shots down the field, Hurts pretty much always had a clean pocket to throw from, and on the rare occasion where they broke down in protection, Hurts obviously has the ability to go off-script and beat teams with speed around the outside.

• Regardless of what you think about Matt Ryan and Jimmy Garoppolo in the quarterback rankings in 2021, let it be said that Jonathan Gannon's boys have made them look quite bad across their first 90 minutes of football this season.

• Jalen Hurts may have missed an early opportunity to hit DeVonta Smith downfield in the first half, but he made up for that in a big way with the shots he took down the field the rest of the half. After a potential touchdown to Jalen Reagor was wiped out due to the wideout stepping out of bounds, Hurts threw an absolute dime on the next series to find a streaking Quez Watkins down the sideline:

91 YARDS FOR THE BIRDS. #FlyEaglesFly

This is a play that shows supreme confidence in just about everybody involved in the play: the offensive line's ability to protect without holding, Watkins' ability to separate, and Hurts' ability to stand in the pocket and deliver with pressure bearing down on him. The only shame is that Watkins wasn't able to get into the endzone, because the Eagles ended up melting down in the red zone and leaving the drive with nothing to show for it.

That was the longest play in Eagles history that didn't lead to a touchdown.

That said, I still think you saw plenty to like from Philly's offense in the first half, particularly in the value they got out of their group of young receivers. Watkins' speed continues to look like a big weapon, Smith created separation fairly often, and opportunities are there to be had with some improved execution.

• The deep shot to Smith immediately after a penalty aside, I did not love Philadelphia's game plan to open this game. Sirianni came out guns blazing in week one against Atlanta, and we saw a comparatively timid gameplan on their opening series against the 49ers, built around force-feeding Miles Sanders the ball. Sanders was excellent a week prior and perhaps deserved more touches, but with San Francisco featuring a beat-up secondary, you could argue there was an opportunity to go for the jugular early that they didn't take.

On the other end of things, Hurts appeared to have Smith earlier in the play on the deep pass they failed to connect on. When he eventually let it fly downfield, he didn't get enough air under it, and Smith would have had to make a spectacular contested catch to come down with it. But if Reagor had managed to stay in bounds on his deep shot late in the first quarter, we would be talking about Hurts quickly bouncing back and making up for the missed opportunity. No fault of the QB's on the second one, the throw to Reagor was a beaut.

(An exception here — I loved the third-and-short option pitch the Eagles ran with Hurts and Sanders midway through the first quarter. The threat of Hurts' speed around the outside of the line sucked the defense in, and Sanders had an easy task to pick up the first down and then some once the ball came his way. Mixing plays in like this here and there gets a big thumbs up from me.)

• To hammer this point home, I didn't especially love Sirianni's approach to fourth-and-short in the first half. Settling for a field goal and putting points on the board first on Sunday is defensible enough, but they looked a bit scatterbrained on fourth down otherwise. You can't expect your defense to pitch a shutout for all 60 minutes, and you definitely can't expect them to hold the opponent to no first downs for the entire game, as they did for the entire first quarter. Their second field goal attempt getting blocked was bad enough, and when you add in that Brandon Brooks got hurt on the ensuing field goal attempt, it was a disastrous series of events for Philadelphia.

Later in the second quarter, Sirianni decided to go for it deep in San Francisco territory, and he chose an odd time to try to bust out a gadget play by using Greg Ward as a QB on fourth down. There are certainly worse guys who could be trusted to throw the ball there, but if you're going to have a guy throwing on the move, it might as well be your mobile quarterback, and Ward hammered that point home by inexplicably throwing the ball away to finish the play.

One point of concern for me early in this season: the Eagles might struggle in short-yardage situations where they decide to go up the middle. Kenneth Gainwell is too small to be trusted getting tough yards on those plays, and Miles Sanders' worst trait as a runner is (probably) his occasional indecisiveness, which can hurt you in a big way when the defense knows the run is coming.

Add it all up, and the Eagles really should be leading this game (by a lot), given how good the defense performed in the opening 30 minutes. Philadelphia moved the ball with ease, but if you can't turn yards into points, they don't mean a whole lot. Philadelphia is only one botched play away from the entire game turning, and it's a position they shouldn't be in with how good they looked for most of the half.

• To the previous point, the defense sure picked a bad time to let down at the end of the first half. San Francisco did not look especially dangerous when they started their final drive of the half, using checkdown after checkdown to move away from their endzone, but Deebo Samuel found a soft spot in Philadelphia's zone and brought the Niners into the redzone. The very next play, San Fran waltzed into the end zone and emerged with a lead despite playing horribly for most of the half. That's football for ya.

• I can't imagine many of you are missing this sort of thing:

The shovel pass is PICKED OFF ‼️ #RamsHouse

• Brandon Brooks has been as good as it gets up front whenever he has been healthy, but staying healthy has been a pretty big issue for him since he arrived in Philadelphia. And given that he had to undergo shoulder surgery at the tail end of the 2019-20 season, this is not what you want to see:

We'll see how serious it ends up being, but fingers crossed that it's just a temporary knock. The only silver lining is that it allowed us to get our first meaningful look at second-round pick Landon Dickerson.

• The defensive dominance up front will certainly take a hit if Brandon Graham is out of the lineup, and with the veteran end down on the field moments before the halftime whistle sounded, we'll have to wait and see what his prognosis is. The only good sign so far is that he walked off the field, but he would eventually take a ride on the cart once he made it to the sideline.