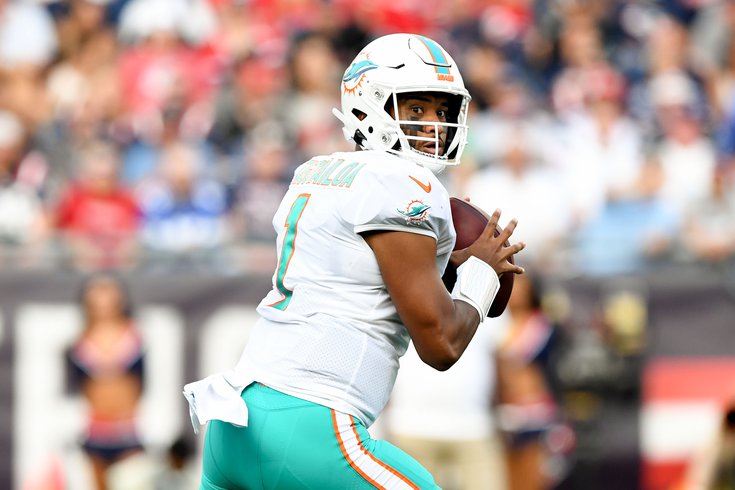 And so, each week we'll lay out a rooting guide for non-Eagles games on the NFL schedule, and yes, I'm aware that most of the below is obvious. You can also check out the latest Week 2 odds and read all my picks, here. Ideal winners bolded.

• Rams at Colts: As a reminder, the Eagles own the Colts' second round pick from the Carson Wentz trade, which can become a first-round pick if Wentz plays 75 percent of the Colts' offensive snaps, or if he plays 70 percent of the snaps and the Colts make the playoffs.

Ideally the Colts will be bad, but not soooo bad that they bench Wentz to preserve their first-round pick. For now, with the AFC South looking like an absolutely dreadful division, the more losses the Colts pile up, the better.

• Bills at Dolphins: Once again, as a reminder, the Eagles own the Dolphins' first round pick, so every Dolphins loss is welcomed by the Eagles. This game in particular is potentially very important to where that pick will land. In Week 1, the Dolphins beat the Patri*ts, so not only is Miami 1-0, but the Dolphins also have a divisional win in the bank. If they beat the Bills, they'll be 2-0 (duh) with head-to-head wins over their two biggest threats in the AFC East. The Bills, widely considered to be the favorites in the AFC East, will be 0-2. The Eagles can really use a Bills win here.

• Patriots at Jets: It would also help if the Patri*ts can stay alive in AFC East contention.

• Bengals at Bears: The Giants own the Bears' first round pick, so the more games the Bears win, the lower that pick will be.

• Saints at Panthers: The Saints are a bigger threat for a wildcard than the Panthers.

• Cowboys at Chargers: No need to explain this one.

• Titans at Seahawks: The Titans are the Eagles' best hope to win the AFC South over the Colts.

• Vikings at Cardinals: The Cardinals are a bigger threat for a wildcard than the Vikings.

• Falcons at Buccaneers: It doesn't appear that the Eagles are going to be bad enough to land a top 5-ish kind of draft pick. The Colts and Dolphins likely won't be one of the 5-10 worst teams in the league either. The Falcons — and the Lions below — likely will. As such, it's probably not the worst thing to have teams like the Falcons and Lions occupying top five picks over teams like the Giants or Washington Football Team, who both have bottom five potential.

Also, since the Buccaneers are likely to win the NFC South anyway, it doesn't really matter if they pile up a bunch of early season wins.

• Lions at Packers: Basically the same explanation as the Falcons-Buccaneers one above.