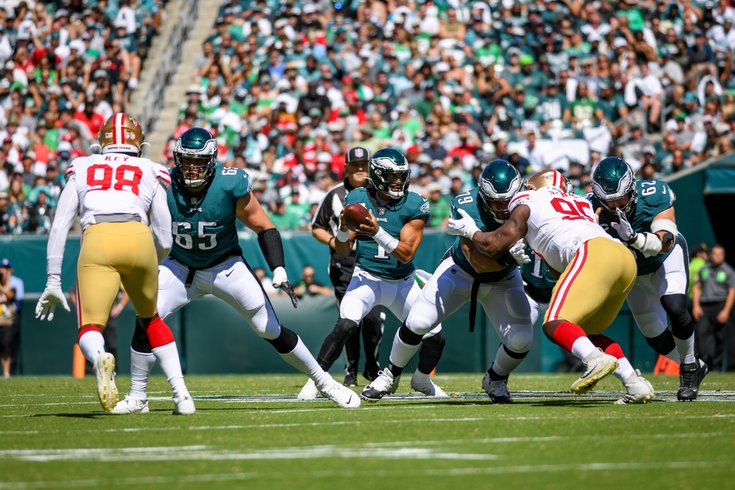 Eagles QB Jalen Hurts in action against the 49ers.

After a beatdown of the Atlanta Falcons Week 1, the Philadelphia Eagles will try to get to 2-0 in their home opener against the San Francisco 49ers Week 2.

Over the last half decade or so, the Eagles have consistently been handicapped by injuries. In 2021, however, so far so good on the injury front. Heading into Week 2, the Eagles only have three players on their injury report, plus three players on injured reserve, but most importantly, they'll have 21 of their 22 starters available. The 49ers, meanwhile, will be missing a bunch of starters. You can find the full Eagles-49ers injury report here.

As we noted in our five matchups to watch, the Niners could be without both of their starting cornerbacks, and their defensive line is banged up. The Eagles could have an advantage against an undermanned group, but they'll need Jordan Mailata to earn his paycheck against Joey Bosa. On the other side of the ball, the Niners have a dangerous trio of players in George Kittle, Deebo Samuel, and Brandon Aiyuk, who can all do damage after the catch.

The Eagles were 3.5-point underdogs heading into this matchup initially, but the line has since moved to 3. Here are our staff writer picks as well as who some others around the country are picking. For the gambling enthusiasts, you can find my Week 2 picks here and some over/unders for Sunday right here.