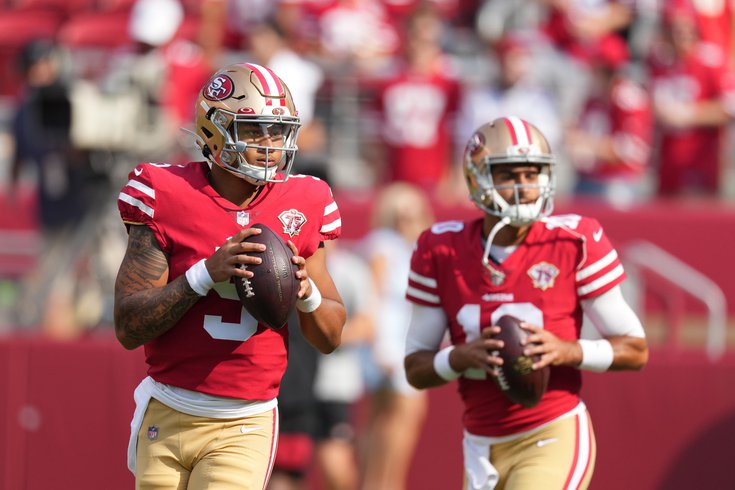 I don't know if you guys knew this or not, but the 49ers have TWO quarterbacks that might play on Sunday. 😱

After their Week 1 win over a bad Atlanta Falcons team, the Philadelphia Eagles will play their home opener Week 2 at Lincoln Financial Field against the San Francisco 49ers, a rare team that they beat in 2020. Here are our five matchups to watch.

1) Jalen Hurts vs. the other side of the sticks

Hurts was objectively very good in his 2021 debut, however, he wasn't asked to throw the ball down the field very often. In fact, according to the NFL's NextGen stats:

• Hurts averaged 3.4 "completed air yards," meaning his average completed pass was caught 3.4 yards past the line of scrimmage, the shortest average in the NFL Week 1.

• He had an "aggressiveness percentage" of 8.6 percent, meaning that only 8.6 percent of his passes were thrown to a receiver that had a defender within one yard of him. That was the fifth lowest percentage in the NFL Week 1.

• His "average air yards to the sticks" was -6.2, meaning that his average throw was 6.2 yards short of the first down marker. That was the shortest distance in the NFL Week 1, and by a fairly wide margin.

Offensive coordinator Shane Steichen explained that part of the reason for that was because the Falcons were taking away the shot plays.

"If they're not going to give us the big chunk, check it down to the tailback and he will get 10 and keep completing footballs.

"Like I said, if you're completing 77 percent of your passes, you have a chance to win a football game. As long as we're completing balls, being efficient on third down and scoring in the red zone, we're going to put ourselves in position to win games."

Hurts executed Nick Sirianni's game plan very effectively and he had a very good command of the offense, but after watching what the Eagles did to the Falcons Week 1, there's a good bet that the 49ers will seek to take away the short stuff in this matchup, and make Hurts prove that he can be effective pushing the ball down the field, with accuracy.

2) The Eagles' wide receivers vs. the 49ers' injury-weakened secondary

Of course, if the Niners do dare Hurts to test their secondary down the field, they will be doing so with a defensive backfield that is not at full strength. The Niners' cornerbacks played the following number of snaps Week 1 against the Lions:

• Jason Verrett had a very good 2020 season, and he is probably the Niners' best corner. He tore his ACL Week 1, so his season is over.

• Emmanuel Moseley is the other starter. He missed Week 1 with a knee injury. Moseley may or may not be good to go Week 2 against the Eagles. Per the Niners' website:

[Kyle] Shanahan is expecting the corner to return "soon" and said he's "holding out hope" he will be available on Sunday.

• Dontae Johnson played 31 snaps Week 1 after the Niners called him up from the practice squad. If you'll recall, that's the guy Travis Fulgham toasted down the sideline last season.

The Eagles played a Falcons secondary Week 1 that was comprised of three Band-Aid free agent starters. It would have been concerning if they were unable to do damage against that group, but they did. This 49ers secondary could be every bit as shaky as Atlanta's.

3) The Eagles' offensive line vs. the Niners' pass rush

Unlike the Falcons Week 1, the 49ers have some stud pass rushers, namely Nick Bosa, Arik Armstead, and Dee Ford.

Bosa had 9 sacks as a rookie in 2019, before missing almost all of 2020 with a torn ACL. He had a sack and two additional tackles for loss Week 1 against Detroit. If he's fully healthy, he's one of the most talented edge rushers in the NFL.

Armstead is a long, lean rusher at 6'7, 290, who typically moves inside on obvious passing downs. I would imagine the Niners will try to get him matched up one-on-one against Isaac Seumalo.

Ford is more of a speed rusher. He typically rushes off the left side of the defensive line (vs. the RT), but it might make more sense to rush him against Jordan Mailata, who was better against power than speed in 2020.

The Niners also have 2020 first-round pick Javon Kinlaw, a beast of a human being at 6'5, 324. Kinlaw did not play Week 1 against Detroit, but could be ready to go Week 2 in Philly.

This will be one of the stiffest tests of the season for the Eagles' offensive line.

A lot has been made of the Niners' two-quarterback offense with Jimmy Garoppolo and Trey Lance. Week 1 against the Lions, Lance only played four snaps, but the threat of his workload growing each week exists. Lance threw one pass Week 1, and hey, it was a touchdown!

Gannon sounded as though he will actually enjoy preparing for both Garoppolo and Lance.

"That's just part of how you have to prepare for the game," he said. "There's not a lot of tape on this guy in the pros. He played a lot in the preseason, played some snaps against Detroit. That will be part of our plan. We got to have a good plan for when he's in the game. Our guys will be prepared with, ‘Hey, this is this guy's skill set, this is how we have to defend him.’

"It's kind of cool. Our players, they'll be excited to start -- they're already prepping for San Francisco, but they'll like the multiplicity of how we're going to play this week."

5) The Eagles' tackling vs. the 49ers' skill position players

The Niners like to get the ball out quickly and into the hands of their passing game weapons, who all seem to run like running backs once they have the ball in their hands. George Kittle, Deebo Samuel and Brandon Aiyuk are all very dangerous after the catch.

"I think the greatest challenge to playing them is this is a very well-coached, physical football team," Gannon said. "We're going to have to match that intensity. They do a really good job of blocking. They do a really good job of running with the ball in their hands, creating RAC after contact from everybody from all the backs that touch the ball to the tight ends, to the receivers. They catch and run with the ball extremely well. We just got to have a good plan with what we're doing with everything that they could throw at us."

If we were to nitpick something from the Eagles' Week 1 win in Atlanta, it would be that they really struggled with tackling in the first half, which they cleaned up as the game progressed. It is paramount that they tackle well as a team against the Niners.