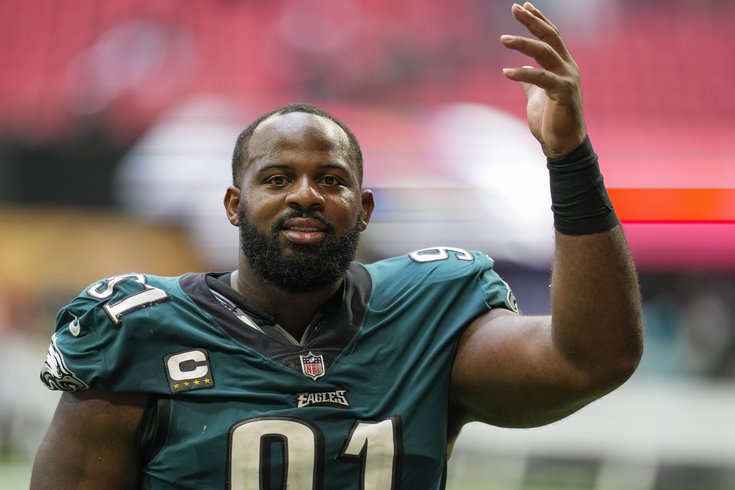 Fletcher Cox wonders why the Eagles aren't in the top 20 in most power rankings.

Here's where people around the country have the Eagles ranked heading into Week 2 of the 2021 regular season. Oh, and here's our version of these sellout rankings, too.

The reigning Heisman Trophy winner caught a touchdown on his first NFL reception and paced the Eagles with six catches for 71 yards in a convincing win over Atlanta. His six catches are tied for the most by an Eagles rookie in a debut since DeSean Jackson in 2000. Smith led all Eagles receivers in snaps (58), further evidence he is viewed as their lead receiver. Smith's elite footwork allows him to gain separation off the line of scrimmage, and he knows how to find an open pocket in the defense. He should have big-time production this year so long as he stays healthy.

#JimmySays: One of the easiest predictions we made prior to the start of the season is that Smith will lead the team in receptions and yards as a rookie, as long as he stays healthy.

Have we all been sleeping on the Eagles? Nick Sirianni's debut went off like gangbusters, as Philly took it to the host Falcons on both sides of the ball in a 32-6 laugher. Jalen Hurts looked very much like a starter the Eagles can put their faith in, throwing for 264 yards and three touchdowns while adding 62 yards on the ground. DeVonta Smith caught a touchdown in his NFL debut, and the defense limited the Falcons to just 4.1 yards per play. A greater challenge lies ahead against the 49ers in Week 2, but the Eagles look like a confident team ready for the fight.

#JimmySays: Last week, the Eagles' average position in these power ranking roundups was 26.75, or basically something close to a bottom five team. One dude had them at 30th, which was ludicrous, given the talent they have in the trenches. So, yes, I believe they were indeed being slept on to some degree.

Now, that doesn't mean anyone should start booking a trip to L.A. for the Super Bowl, but it was silly to think of this team as bottom five in the league.

A spirited debut from Nick Sirianni and Co. Jalen Hurts, who, for one week, looked nothing like a soon-to-be-replaced bridge quarterback on a tanking football team. While the Falcons are, perhaps, more of a mess than we initially thought, Hurts was smooth and worked middle distance throws to all thirds like a seasoned professional. Philadelphia’s defensive front can still be a great equalizer for this club, which, thanks to a Ryan Fitzpatrick injury and a painfully milquetoast offering from Jason Garrett in New York, will end up being a bigger factor in the NFC East than initially expected.

There weren’t an abundance of good vibes coming out of Eagles training camp in the past couple of months, and most indications were that the offense under new head coach and play-caller Sirianni and Hurts had struggled mightily to get its footing. The Deshaun Watson trade rumors that circulated, along with the fact that Sirianni refused to name Hurts the team’s starter until a week before the season, created plenty of doubt that the team considers Hurts as a long-term, foundational piece.

Well, one game won’t cement Hurts’s spot in the team’s Hall of Fame, but the way he played in the team’s 32-6 win against the Falcons on Sunday could portend a better-than-expected performance in 2021 from both Hurts and the offense at large. (Also, the fact that Hurts and Sirianni have their own secret handshake can’t hurt.)

The second-year pro completed 27 of 35 passes for 264 yards, three touchdowns, no picks, and a 126.4 passer rating. He benefited from a QB-friendly game plan by Sirianni, who leaned heavily on quick hitters and screens in the short area that helped Hurts find a rhythm in the pocket early on (his average depth of target was just 3.6 yards, lowest among all starters this week). But it wasn’t like Sirianni was completely hiding Hurts in the offense: Hurts made big throws all game, completing nine of 11 passes for 108 yards and two touchdowns against the blitz, per Next Gen Stats. He finished fifth in completion rate over expectation (9.1 percent), displaying the ability to fit throws into tight windows. And, of course, Hurts also brought his game-changing rushing talent to the Eagles offense by running for 62 yards on seven totes.

Hurts has a long way to go to prove that his Week 1 passing efficiency was no fluke. But it’s tough to imagine a better start to the Sirianni-Hurts relationship in Philly.

#JimmySays: I would say that the first paragraph above was true of the first half of training camp, but the vibe meter rose steadily as the summer progressed to the point where they even made a believer (to some small degree) of a cynical jerk like myself.

There's a valid point to be made here by the folks at The Ringer that the game plan was indeed very Hurts-friendly. We'll get to some more of the NextGen stats they're alluding to in our "five matchups" post tomorrow. But also on that front, from the time he was hired, Sirianni pointed to his experience helping shape schemes / game plans to fit the strengths of three different QBs in Indy — Andrew Luck, Jacoby Brissett, and Philip Rivers — in three different seasons. I thought he walked the walk in that regard Week 1 for Jalen Hurts.

No team rushed for more yards in Week 1 than Philadelphia's 173, a good indication the offensive line is back and might fuel a better-than-expected season.

#JimmySays: This is the guy who had them 30th prior to Week 1, as mentioned above.

There were quite a few questions facing the Philadelphia Eagles in 2021. The biggest wasn't hard to pinpoint: Could Jalen Hurts improve as a passer in his second season and take full control of the offense?

Philly's defense stepped up big as well. The Falcons managed just 260 yards of offense, converted just three of 14 third downs and were held out of the end zone.

#JimmySays: Yep, it was a whoopin'.

MORE: Week 2 NFL betting lines: Point spreads for every game | The Eagles no longer have the worst odds to win the NFC East | McMullen: Sirianni serves notice on the NFL

Jalen Hurts was one most impressive players of Week 1. DeVonta Smith looked great. The Eagles as a whole were very good. They're healthy and let's be honest: Doug Pederson might have turned into a bad coach by the end. Like a lot of Week 1 results it's tough to know exactly what this means for the Eagles going forward, but that was really good.

#JimmySays: We probably didn't need this Week 1 result to diagnose that Doug lost his fastball in 2020 (and probably sooner), but the point is certainly valid. Doug will be back in the NFL in some capacity next year. I'm curious to see what kind of role he lands. I think the best he can probably hope for initially is an offensive coordinator position, paired with a defensive-minded head coach.

The Jalen Hurts era is off to a great start. He was impressive in beating the Falcons. If that continues, this team will be a playoff threat.

#JimmySays: The NFC East still stinks, so that'll help too.