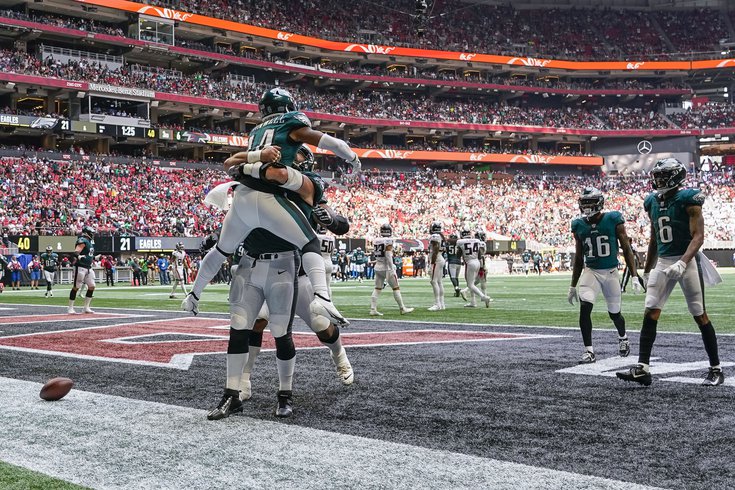 Week 1 was a good one for the Philadelphia Eagles. Not only did they beat up on the Falcons and start the Nick Sirianni Era with about as good of a win as fans could've hoped for, but they also saw each of the other three teams in their division lose, leaving them alone atop the NFC East after just one game.

And sure, the Eagles beat up on a bad opponent — while the Cowboys narrowly lost to the defending Super Bowl champions — but they still came away with a win. And a win is a win is a win. The same can't be said for the Giants or Washington Football team, both of whom also lost and not to teams anywhere near as talented as Tampa. And as such, after finishing with just four wins a season ago, the Eagles are already a quarter of the way to matching that win total after just one game. More importantly, they're not only in first place in the NFC East, but the oddsmakers have them moving up the pecking order when it comes to the division odds.

Heading into the season, the Eagles had pretty much been hovering anywhere around +500 to +550 to win the NFC East. Now, after a 1-0 start while the rest of their division is 0-1, oddsmakers at most sportsbooks have the Eagles ahead of the Giants and closing in on Washington, who still remains second behind the Cowboys. Here's a look at how a few different places currently see the division...

It's no surprise that Dallas remains atop the division despite their loss. They went on the road and lost to the Super Bowl Champions on a last-minute drive by Tom Brady. Those kind of things happen, but more importantly the Cowboys looked good in defeat, and Dak Prescott put to rest any questions remaining following a season-ending injury last year followed by offseason shoulder issues.

And really, after seeing that performance from the Eagles on Sunday, it shouldn't be surprising that they're climbing up this list. Basically everything went right for them, especially after the first quarter. Jalen Hurts balled out. DeVonta Smith looked like a veteran. Nick Sirianni made right call after right call. The offensive line dominated. Miles Sanders, Jalen Reagor, Dallas Goedert and Zach Ertz, and even Kenny Gainwell all had their moments. And the defense, after a scary start to the game, settled down in the middle portion before dominating the home stretch.

Vegas handicappers aren't the only ones high on the Eagles right now. Over at fivethirtyeight, just a few days ago, they had the Eagles projected to go 7-10, with a 24% chance of making the playoffs. Their opening day victory has their projected win total up to nine, and their playoff odds up to 46%, the highest jump of any team this weekend.

It's easy to feel good this Monday as an Eagles fan. And it appears the oddsmakers agree. Now let's just hope you were one of the early believers and got your bets in before the opener, when the odds were much better. Or, maybe just wait a couple of weeks. With this upcoming stretch of Eagles opponents, those odds are likely going to get worse before they get better again.

Oh, and if you're wondering, the Eagles' Super Bowl odds also improved. Hovering near the bottom of the league and around +10000, the Eagles odds, while still very long, have moved to +7000 at FanDuel, moving them out of the bottom 10 in the league. Hey, you've gotta start somewhere.

We'll have more coming shortly on the early odds for next week's game against the 49ers as well as the rest of the matchups around the NFL.