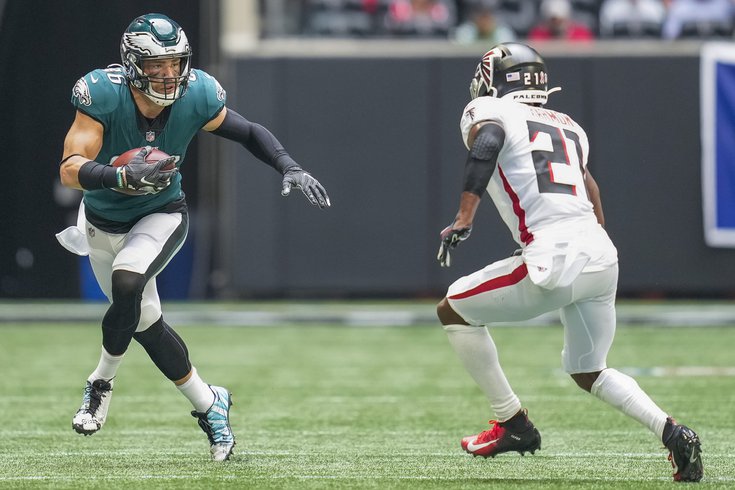 The snap count distribution between Zach Ertz and Dallas Goedert was pretty even until Ertz left for a bit with a hamstring injury.

In their Week 1 win over the Atlanta Falcons, the Philadelphia Eagles played 71 snaps on offense, and 72 on defense. Let's just get right to the snap counts, and some notes.

Analysis: One of the concerns this season will be whether Hurts can stay healthy as a running quarterback. He ran 7 times for 62 yards on Sunday, but was often able to slide or get out of bounds. He also only took 1 sack.

Analysis: One mild surprise from Week 1 was that Boston Scott didn't play at all in the regular offense. I thought it might take some time for Gainwell to overtake Scott for the No. 2 running back job, but, not so much.

Analysis: Smith is clearly WR1. No surprises there. He was the only WR to get the night off during the Eagles' final preseason game. The Eagles rotated their receivers depending on the play call, but it seems that Reagor is ahead of Watkins. We'll see if that fluctuates from week to week. Reagor rewarded the Eagles with a nice TD catch-and-run on a screen play.

Analysis: I was curious to see who would get more snaps between Goedert and Ertz. It was about even until Ertz was forced to leave with a hamstring injury. He did return.

Analysis: There were only five times in 2020 in which the starting five offensive linemen played every snap. (Honestly, I was surprised there were that many.)

Analysis: Jonathan Gannon and Tracy Rocker heavily rotated their defensive linemen, as eight players played at least 26 snaps, and all 10 linemen got in the game. No defensive linemen played more than 57 percent of the snaps, though the lopsided result had something to do with that.

Analysis: Avery and Johnson split 29 snaps as the SAM linebacker. That should be a spot that the Eagles have their eye on in the 2022 NFL Draft.

Analysis: Epps started, but left the game early with a concussion. With Rodney McLeod out, the Eagles played the majority of this game with just two safeties. The Eagles are paper-thin there, and if another safety had gone down, they would have rightfully been second-guessed for not elevating Elijah Riley from the practice squad. There's a good bet they'll do that Week 2.