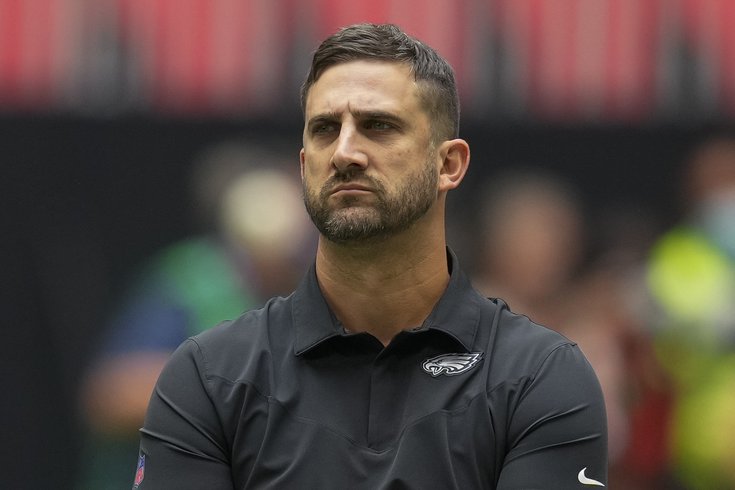 Nick Sirianni had the last laugh Sunday, as he made an incredibly impressive NFL head coaching debut.

Arthur Smith was the headliner in the 2021 NFL coaching carousel, an offensive guru who turned Ryan Tannehill from a bust in Miami to a quarterback who earned the type of coin in Tennessee to join the same country clubs as Smith’s father, billionaire FedEx founder Fred Smith.

You may not remember but Smith was actually a part of the Eagles' coaching search after Doug Pederson was fired late in the process, a pie-in-the-sky attempt to get the flavor of the week to change course before reality set it and things pivoted to 'let's keep interviewing people until we find someone better than Josh McDaniels,' a sentiment that ultimately landed on Nick Sirianni.

Just about everyone in the market for a new coach wanted to interview Smith but the Eagles got in line after the box office was closed, although the Falcons coach did give Jeffrey Lurie the cursory meeting out of respect despite already being deep into negotiations with Atlanta.

Smith even talked about it in advance of the Eagles’ 32-6 drubbing of the Falcons at Mercedes-Benz Stadium Sunday.

“I was just honored,” Smith said when talking about his discussion with Lurie and Co. “I was fortunate to go through the hiring process last year. Really thankful for the opportunity the Eagles gave me to come down [to Florida] and interview with Jeffrey Lurie and that staff, and Howie [Roseman]. I was fortunate. I talked to other teams.

“I’m real fortunate Atlanta offered me the job. So it never got that far down the road.”

Despite the revisionist history back in 2016, the Eagles would have preferred to hire Adam Gase and did try to steal Ben McAdoo away from the Giants before landing on Doug Pederson.

Had Lurie been more definitive on Pederson’s future immediately following the 2020 season, Smith would almost have surely been at the top of their most-wanted list and Sirianni might still be at the right hand of Frank Reich.

Sirianni was Lurie's compromise candidate born out of the understanding that no matter what Roseman and McDaniels said to the Eagles owner privately, Lurie believed they would ultimately clash.

It was also Pederson-like at Sirianni’s introductory press conference, a disaster in which a coach few fans in Philadelphia had ever heard of came off like an overmatched cheerleader rather than the next wunderkind in the NFL like Smith surely would have been in Philly.

“[Sirianni] even joked the other day about his first time doing the media, and everyone ripped him, and how mad he was,” veteran defensive end Brandon Graham said after Sunday's win. “But at the same time, he was like he had to shake it off and come back and do it again."

Sirianni alluded to the story after the game as well when discussing his Saturday remarks with his team.

“You gotta make sure you had that next play, that dawg mentality and know that you’re here for a reason," Graham noted. "You can do it. You’re going to make mistakes … For him, we just wanted to go out there and play hard for him because he’s been the same guy since he got here. There’s no fakeness with this team. I think the energy is real. The sky’s the limit.”

The sky is also the limit for Sirianni as well, who clowned Smith on Sunday and turned Jalen Hurts into a superstar for 60 minutes with a college-like, RPO-driven offense.

The Eagles coach did have more talent at his disposal than Smith and an hour of football isn’t exactly a definitive sample size but Sirianni was the one who made things easier for his quarterback. And it was the Eagles’ coach who had the second-year signal caller in his fifth start, not the five-time Pro Bowl selection to work with.

Both coaches showed little in the preseason thinking they might have a competitive advantage when things got real.

“It's a long season to go but I certainly didn't do a good job of getting us ready to go today,” a disappointed Smith said. “... Hat's off to Philly. They did a great job coming in here. They took advantage. Situational football. They scored in the red zone. We didn't. And then we got down and we played right in their hands.

“That's what happens when you get down multiple possessions and you get out exactly what happened what you saw at the end there.”

From a Philadelphia perspective what you really saw was history repeating itself. The afterthought outdid the anointed.

“I had to stop before I went out and address the team. I had a moment with myself and just, it meant a lot and so just thought about all the work that got me to this position,” Sirianni admitted.

-John McMullen is a contributor to PhillyVoice.com, and covers the Eagles and the NFL for Sports Illustrated and JAKIB Media. He’s also the co-host of “Birds 365,” a daily streaming show covering the Eagles and the NFL and the host of “Extending the Play” on AM1490 in South Jersey. You can reach him at jmcmullen44@gmail.com. Follow John on Twitter here.