Week 2 NFL picks: Rounding up the experts' predictions for Eagles vs. 49ers 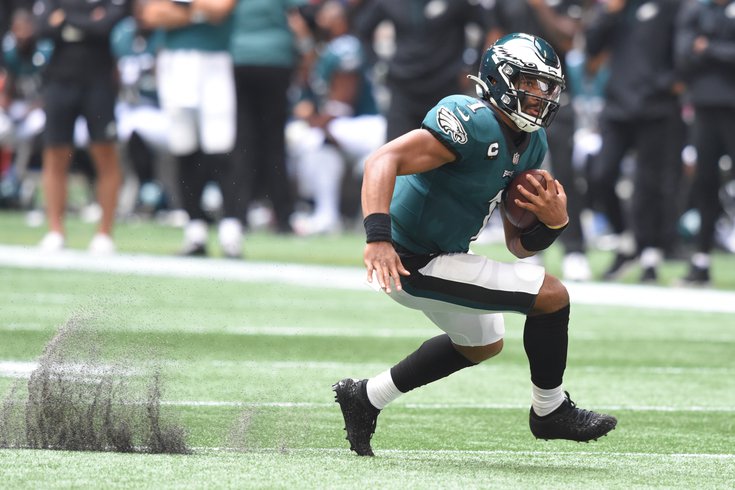 Jalen Hurts leaves a trail of dust when he runs, not unlike Road Runner.

The Eagles kicked off the Nick Sirianni Era in about the best way possible, with a blowout win on the road. And sure, it came against the Falcons, who were not good last year and are expected to be bad again this year, but let's not forget that the Eagles were underdogs in that game, and still won by 26 points while holding Atlanta to just a pair of first-half field goals.

This week, the test is expected to be tougher for Philly, which will host the 49ers and once again find itself as the underdog. When looking at the Week 2 odds, most sportsbooks have the Eagles again as three-point underdogs despite them returning home to what is expected to be a rocking Lincoln Financial Field.

Can Jalen Hurts, DeVonta Smith, Miles Sanders and the rest of the Eagles offense put up another strong showing in Week 2? Will the defense keep the opponent out of the end zone for another game? Will they even need to if the answer to Question 1 is a yes? And can Sirianni and Co. prove that their coaching performance in the opener wasn't a fluke? Either way, the 49ers should offer a tougher test and give fans a better idea of what this team is made of.

So, how do the experts — both locally and nationally — see this game playing out on Sunday? Funny you should ask...

• PhillyVoice staff: First up is always a reminder of how our own writers are picking this one. And just like in Week 1, we're split again. Interestingly enough, it's the same four people picking against the Eagles as a week ago. Some people never learn, I guess. Anyway, since it was the minority opinion that was the correct one a week ago, that's who we'll give the preference to this week. And oh, look, it's my pick...

I know, I know. Here I am picking the Eagles again after warning you against just that all offseason long. Yes, I only predicted six wins on the season and I didn't really want to change that after just one game. But you can only pick the games that are on the schedule, and after watching both these teams play a week ago — not to mention the 49ers injuries on both sides of the ball — it's hard not to like Philly's chances in this one.

If the Eagles offensive line can once again dominate, and if their defensive line can again wear down the opposition over the first 30-40 minutes and and take over late when it matters, then the hard work is done and Jalen Hurts and Co. should be able to score enough points to win this game. Will he be as good as he was in Week 1? He might not need to be. Hell, he didn't have to be that good for the Birds to win in Atlanta, but he was anyway.

If the Eagles start off 2-0, then things will really get interesting as they'll visit a suddenly banged-up Cowboys team on Monday Night Football in Week 3. But first, they'll have to take care of business against the 49ers, and the expectation here is that while it might be close, that's exactly what they'll do.

• Inquirer.com: Two of their three Eagles writers are picking the Birds to win, with the lone holdout being Jeff McLane, who is worried that George Kittle might cause too many problems for Philly's defense to handle...

[...] Kyle Shanahan’s offense is familiar, at least the pre-2021 version some teams are still copying. He’s smart enough to be one step ahead and have new concepts. But the precise zone blocking, the marrying of the pass and run with play-action and the misdirection are still hallmarks. Raheem Mostert may be out for the season, but rookie running back Elijah Mitchell appears to be the latest running back to benefit from Shanahan’s run calls.

But the biggest test for defensive coordinator Jonathan Gannon’s unit will likely be tight end George Kittle. The Eagles had no one to cover him last season when he caught 15 of 15 targets for 183 yards and a touchdown. It’ll again be a group effort, with probably a safety shaded in his direction. But that will leave receivers Deebo Samuel and Brandon Aiyuk in one-on-one situations, and if Jimmy Garoppolo has time, Eagles corners could have a hard time holding up.

Before the season, I had Week 2 down as a sure loss. I’m not as certain now. I think Garappolo, even with a little Trey Lance sprinkled in, can be dealt with. But the Eagles had trouble stopping the run in Atlanta, and even though they turned it around in the second half, I have a feeling Shanahan will know how to exploit the linebackers at the second level.

• NJ.com: Over at NJ.com, four of their six writers are picking the 49ers to beat the Eagles. And it's their two Eagles beat writers who are picking the home team. That includes Mike Kaye, who sees a 26-24 win for Philly.

Whacky things tend to happen when a new head coach, a new defensive coordinator and a relatively unproven quarterback enter the opening stretch of a season. While the 49ers looked terrific against the Detroit Lions last week, they’re a bit banged up and are entering a hostile territory at The Linc, where fans will be filling out the stadium. Jalen Hurts was sensational against the Falcons, and the hometown crowd should give him even more “juice” in Week 2. Look for this battle to be won in the trenches in a tight game.

• Bleeding Green Nation staff: Five of their seven writers are picking the Eagles to win again on Sunday.

Week 1 almost looked too easy for the hard-luck 49ers, so the Football Gods smote them again with brutal season-ending injuries to CB Jason Verrett and RB Raheem Mostert﻿. I still see them as Super Bowl contenders, but this is a tricky matchup. The Eagles showed new schematic wrinkles and variation on both sides of the ball in their Week 1 blowout of Atlanta, making them hard to prepare for. San Francisco looked vulnerable in run defense against Detroit, and this Philly attack is primed to turn into Baltimore North, with Jalen Hurts﻿, Miles Sanders and Kenneth Gainwell running wild on the way to a surprising 2-0 start that gets the Sunday night podcasts buzzing.

• ESPN staff: Four of their 11 NFL experts are picking the Eagles, which is twice as many as a week ago.

This is a second straight road game for the 49ers, who handled the Lions last week. The Eagles are making their home debut after beating Atlanta on the road. Jalen Hurts looked good in that game, but this is a much better defense. Even so, I think the Eagles will find a way to pull this one out. They are 8-1 against the spread in the last nine against the 49ers and I think that plays true in this one. Hurts has another good day. Upset.

• CBS Sports staff: Just three of their eight experts (including Prisco) are picking the Eagles to win.

The Eagles are better than we realize. The 49ers are still pretty good. Kyle Shanahan will make sure they hear it all week long after they tried to blow the Week One blowout of the Lions.

I loved how Eagles quarterback Jalen Hurts played in Week One, but that will prove to be a lot harder against the 49ers than it was against the Falcons.

• USA TODAY Sports staff: Just like last week, only two of their seven NFL writers are going with the Eagles in this one.

One 'dog the gang is almost unanimously backing? The Philadelphia Eagles in their home opener coming off a surprisingly convincing Week 1 road victory in Atlanta. Few would argue Philly is a better team than the San Francisco 49ers, but the Eagles are getting a full field goal at home and the 49ers nearly choked last week against the lowly Detroit Lions before losing both Raheem Mostert and Jason Verrett to knee injuries.

Let's not forget that while there remain questions about Hurts, the receiving corps and the secondary, the Eagles have one of the best defensive lines in the league, they're loaded with young (if unproven) talent in the receiving corps, and the offensive line is in much better shape with both Brandon Brooks and Lane Johnson healthy.

It's possible a lot of us wrongly looked past Philadelphia this offseason, and it's also possible the 49ers continue to be jinxed in the injury department. With that in mind, take the points.

• The Athletic staff: All eight of their experts* are picking the 49ers. (*This does not include their two Eagles beat writers, Zach Berman and Bo Wulf. Their picks are not up as of this writing.)

• Sheil Kapadia, The Athletic: Sheil picks games against the spread every week, and just like last week he's taking the Eagles and the points.

Eagles fans went from “I have no expectations this season” at 1 p.m. last Sunday to “Maybe we can win the division?” by 4 p.m. Their offensive and defensive lines dominated in a win against the Atlanta Falcons, and that will have to be the formula again if they’re going to upset the 49ers. It would be no surprise to see Kyle Shanahan rely heavily on the run game. The Eagles played with two deep safeties on 39 snaps last week, according to TruMedia and Pro Football Focus.

The 49ers looked shaky defensively at times against the Detroit Lions, and they lost starting corner Jason Verrett to a season-ending injury. I think Jalen Hurts will be able to make some plays against this group and keep it close.

This is one of the few NFC matchups between 1-0 teams, and the 49ers looked like a Super Bowl contender with a healthier team. Deebo Samuel and George Kittle will create mismatches, and San Francisco will build an early lead. The Eagles rushed for 173 yards in Week 1. San Francisco will make that job a lot more difficult.

The Eagles' domination of the Falcons in Week 1 cannot be ignored. They got everything they could have asked for from Jalen Hurts and the offense. The defense was very active and got after it up front. Nick Sirianni already looks like a young coaching star in the Kyle Shanahan vein. San Francisco has traveled well to the East with Shanahan, but their sloppiness late in Detroit will carry over a little to Philadelphia. The Eagles will find many of the same things to exploit in the 49ers' defense the Lions did, only at a higher level.