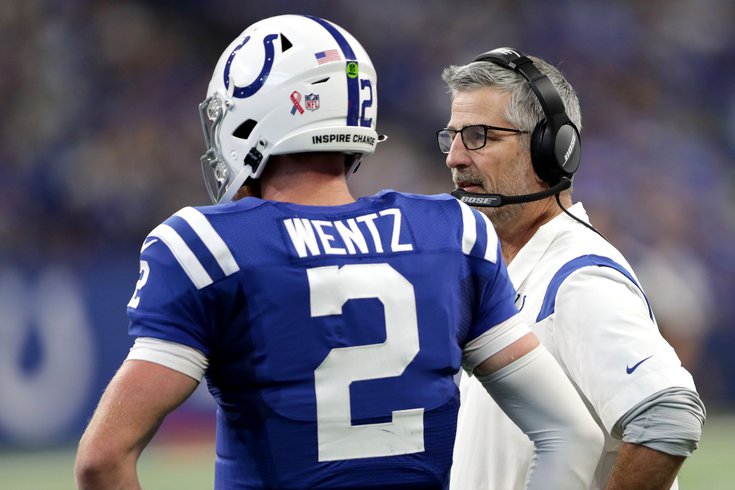 "I immediately regret trading for you."

For the last 21 years, HBO Sports and NFL Films have teamed up to chronicle training camps of various teams around the league in the popular docuseries "Hard Knocks," beginning with the Baltimore Ravens during the summer of 2001. On Thursday, the NFL announced that for the first time in the franchise's history, Hard Knocks will follow a team in-season. The subject will be the Indianapolis Colts, or in terms of Philadelphia sports fans, the team that traded with the Eagles for Carson Wentz.

Many Eagles fans will watch Wentz closely this season, (a) because the Eagles' draft pick compensation is tied directly to Wentz's and the Colts' performance in 2021, and (b) because it's sports, and it's fun to follow noteworthy athletes with their new teams after they've moved on from from Philadelphia.

From a football perspective, it doesn't feel like a great idea for the Colts to invite that kind of distraction into their building. Also, it should be noted that the Eagles own a second-round pick from the Colts that can become a first-round pick if Wentz either plays 75 percent of the snaps, or if he plays 70 percent of the snaps and the Colts make the playoffs. There's a general belief that if the Colts' season goes horribly wrong, they'll simply bench Wentz so that he cannot achieve those playing time benchmarks. Might it be more difficult for the Colts to bench Wentz for draft pick preservation purposes if they're under the microscope of a popular docuseries that will be watched closely by the entire NFL?

The Colts have already had a turbulent offseason after suffering an assortment of injuries, and being one of the worst-performing teams in the NFL in terms of vaccination rates. Their start to the 2021 regular season has also not gone as planned, as they lost their opener at home handily to the Seattle Seahawks.