Eytan Shander: How the Eagles can continue to prove their doubters wrong

The Birds made me look foolish with their play against the Falcons. But can they back it up in Week 2? 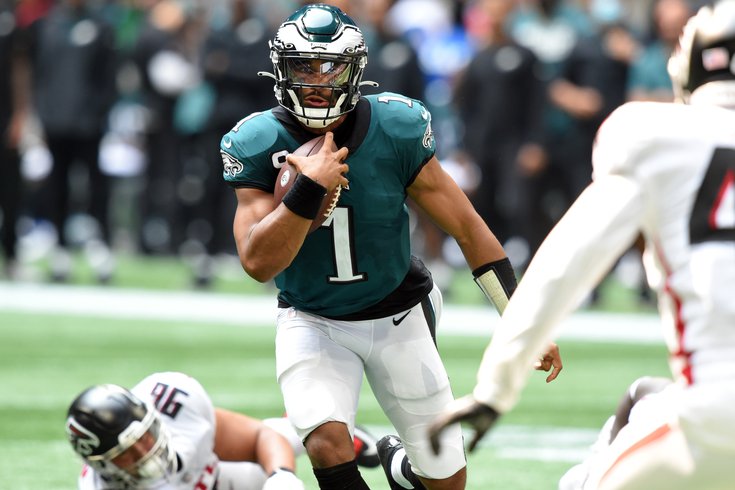 The most concerning thing to me heading into this season was how a team, one that barely played together in the preseason, could possibly be prepared. This was way deeper than any rock-paper-scissors game, nor was it whether any vets would "buy into" his system.

This was about an intricately designed offense led by an inexperienced – yet talented – QB, a brand new head coach, and several young receivers, playing without any real preseason reps together. The door was open for concern, I kicked it open – losing my balance in the process. I’m not waiting for any other foot to drop, nor am I anointing Nick Sirianni the next champion.

What I can tell you is that I was 100 percent wrong about how prepared and focused this team was against Atlanta. The bar is truly raised after that blowout — not that he needs a second straight win, but that the flow and swagger remain.

I was wrong in thinking how much time the Eagles would need in starting on offense, but still was confident the defense could hang. I did not see domination, but we simply had them hanging in the game. Johnathan Gannon put together a masterpiece.

This can all be duplicated without the Birds winning on Sunday, and that's not because the line in this Eagles-49ers game has Philly as a 3.5-point underdog in their home opener. Rather, they can prove something by simply coming out and sustaining the same energy they had in Week 1. And if the team can duplicate its preparation going into this week, and the coaching staff can be equally prepared for adjustments — that will go a long way toward them beating San Francisco.

But even if they don't win, another strong showing would certainly be confidence inspiring. It’s the NFL, sometimes talent wins out, sometimes the ball bounces a crazy way, and sometimes a ref gets in the way.

Seeing a team control how they prepare through execution on the field in all three areas was insanely cool. Every play felt like it flowed perfectly with the last, something that seemed vacant on both sides of the ball over the past few seasons.

The defense held a “second-half offense” scoreless! I don’t care how bad Atlanta’s offensive line played, nor how uninspired their play calling ways, they have some talent out there. The Falcons were able to put up some points last year while trailing, and for the Eagles defense to shut them out was nothing short of impressive. They dominated Atlanta even more in the second half, following some key adjustments.

This was as refreshing of a win as it was entertaining. In some cases, we can collectively exhale that this offense has something in it, that Hurts and Devonta Smith can play. I can admit that whatever the head coach was doing this offseason worked, whatever they were doing preseason worked. The defense was two steps ahead of a talented offense.

So, once again, great game, coach. Looking to see that same fire burn as bright through any adversity as we saw it torch Atlanta. Insert the obligatory – General Sherman would be proud.

It looks like the Eagles reversed the curse of drafting a WR in the first round, now what?

The Falcons absolutely, positively, without any shred of a doubt stink out loud, now what?

Those aren’t the rantings of a belligerent fan still drunk from the tailgate, on hold for some radio show since the same tailgate. Unfortunately for him, and fantastic for the rest of us, there isn’t anything to take away that’s negative.

It’s an amazing feeling to open the season in such dominating fashion, a flawless victory that even had Raiden’s hands raised to the sky. Just look at how comfortable – we’ll get to more of that in a little bit – the entire team was throughout the game.

But back to the questions you thought were products of drunk ramblings, they are the most important questions of the season so far and have absolutely nothing to do with final score.

Wait, what? Did he just say that the final score doesn’t matter next week?

Absolutely not. This is a long season where we already pledged patience just a week ago. That hasn’t changed. But more importantly, what I want to see carry over — why I ask, “Now what?” after an amazing performance — is confidence. The players had it, the coach proved – me and others – wrong in having it, from vets to rookies, everyone had it.

I was blown away. I want to see that same preparation go into this week’s game against the Niners. The Eagles were impeccably prepared, the execution was so perfect it felt robotic at times. No team walks into the first game of any season and dominates an offense like Atlanta’s without being on the same page, every single play.

Yes, they did that against a brutal football team, but they can repeat that preparation again and again. A team can lose for a myriad of reasons in the NFL, where most are out of their control. One of the few things the Eagles can duplicate each week, no matter the outcome, is how prepared they are for their opponent.

I want nothing more to see Hurts and Smith bounce back after a bad quarter. They’ve earned the benefit of growth more so than expectation. We will all see how this team plays on the field, whether a game is won or lost by decisions or preparation. The energy we know the Eagles will open the game with will also be tested. The fans will be tested. Nobody is saying people will leave early or with the team down two touchdowns but crawling out from any deficit against the Niners won’t be easy.

This is the most tangible way I can measure growth from the first week through Sunday. Outside of a blowout, just keeping composure through adversity is enough for me.

Finally, here are some play I like in Week 2...

• 49ers at Eagles — I love the under for the Eagles game. Both teams will move the ball a lot with quick passing and a commitment to the ground game, plus Hurts will run.

• Broncos at Jaguars — You have to take Denver on the road every time with Bridgewater until he proves otherwise, he's a cover machine especially on the road. So take Denver minus-6.

• Bills at Dolphins — Lastly, Buffalo isn't going to lose two straight games, especially taking on a lesser opponent in Miami. I would be OK with laying points here, but it's better to bet two units to win one with the Buffalo money line.