Eagles screen game vs. Atlanta, with gifs and stuff 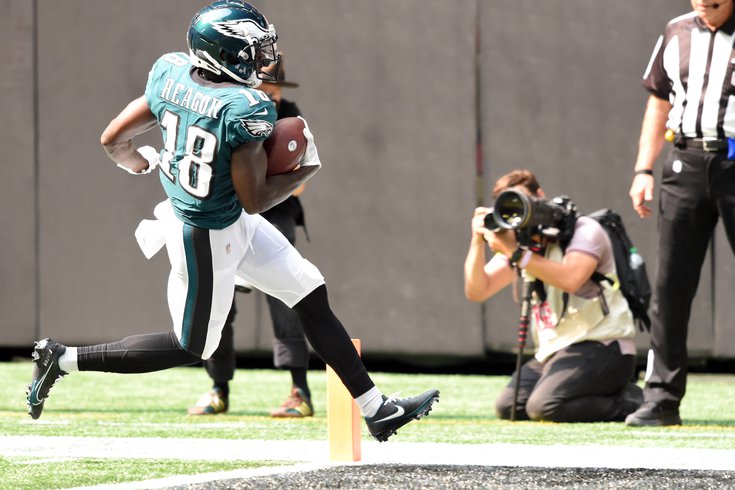 Jalen Reagor scored on a screen pass on Sunday.

Remember when screen passes used to be an effective part of the Philadelphia Eagles' offense? It's been a while, but they might be back.

In their Week 1 win over the Atlanta Falcons, by my count, the Eagles ran seven screen plays. Jalen Hurts was 7-for-7 for 85 yards on those screens, which included a 23-yard "nail in the coffin" TD to Jalen Reagor. They also had a 15-yard penalty tacked onto one of their screens for a late hit out of bounds on Quez Watkins.

The Eagles' screen game a season ago was absolutely dreadful, for a variety of reasons, ranging from an offensive line that had little continuity, a quarterback who wasn't selling them effectively, predictable play-calling, and running backs who had passes bounce off their hands for incompletions.

Official NFL screen pass statistics aren't available, but in a story for the Philadelphia Inquirer on November 26th of last year, Jeff McLane watched every pass on the season and determined that the Eagles had attempted 24 screens at that point in the season, which would have been 10 games deep. According to McLane, the Eagles had completed only 15 of those 24 screens for a total of 55 yards, or an average of 2.3 yards per screen attempt. Gross.

The NFL's "Game Pass" offering does not yet include coaches film, so there's only so much we can do with the following video, but for the sake of just generally being able to enjoy watching screen passes actually, you know, work... here's a cutup of all seven of those screens from Sunday.

• The Eagles ran a screen on the first play of the game. It worked, and they got the same look on the other side of the field, so they ran it again. Both were successful.

• A season ago, Doug Pederson would run screens to players who shouldn't have been getting those touches, like Greg Ward, for example. Those screens were maddening, given Ward's inability to create after the catch. Nick Sirianni did a much better job getting the ball into the hands of players capable of making YAC plays, like Watkins, Reagor, Dallas Goedert, and Miles Sanders.

• And of course, as you've probably seen by now, Jordan Mailata nearly murdered a guy on the Reagor TD.