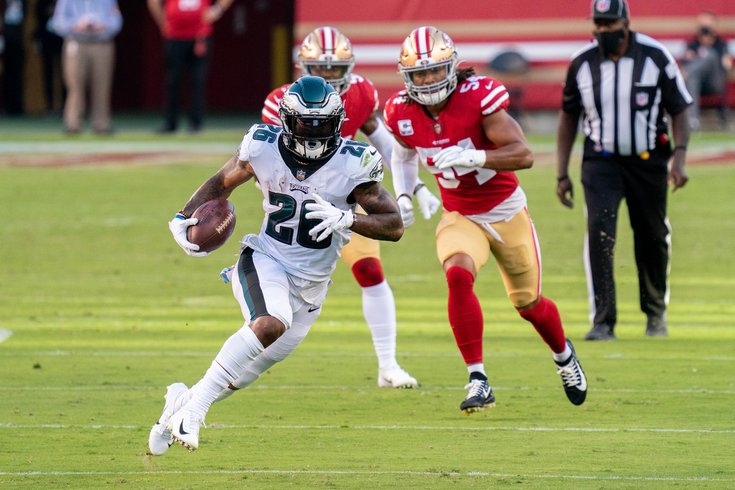 The Eagles' season got off to a flying start in Atlanta as they blew out the Falcons in their opener. Now, the question becomes whether or not they can do it again, or if that Week 1 win was a fluke. They'll get a chance to start the season 2-0 on Sunday when they host the 49ers at the Linc in their home opener.

The oddsmakers say the Eagles are three-point underdogs (well, most of them), but given the week full of bad injury news for Kyle Shanahan's team, and there's reason to believe this game could go right down to the wire. And with a high point total projected, it could be a shootout as well, the rare double-treat.

It was a thriller a season ago when these two teams met in California, with the Eagles picking up their first win of the season over Nick Mullens and an injury-plagued Niners squad. While there are injuries, it's not nearly as bleak as it was a year ago. Jimmy Garoppolo will be under center — as will Trey Lance from time to time — and George Kittle always remains a threat. But San Francisco will be without its starting running back and at least one starting cornerback (and possible two).

The Eagles, meanwhile, still appear to be on the healthy side, something that Nick Sirianni is going to try to keep going as long as he can. Will they be able to take advantage of a 49ers team playing on the other side of the country? Will the Sirianni Era get off to a 2-0 start? Or will the Niners exact some revenge for last season's loss?

We'll find out on Sunday, but in the meantime, here's a look at what you need to know for this week's game, as well as how our writers see it playing out...

The 49ers lost No. 1 CB Jason Verrett to a torn ACL, and their No. 2 CB, Emmanuel Moseley, who did not play Week 1, did not participate in practice on Wednesday. If Moseley can't go, the Niners will be starting fifth-round rookie Deommodore Lenoir, and one of the following corners — third-round rookie Ambry Thomas, Dontae Johnson, Josh Norman, or Dre Kirkpatrick, who the Niners signed on Tuesday. 😬

On the defensive line, three other starters — DL Arik Armstead (hip/adductor), DT Javon Kinlaw (knee), and LB Dre Greenlaw (groin) — all also missed practice Wednesday. Those guys could all play, but they probably won't be 100 percent.

The Niners also suffered a major loss on the offensive side of the ball. Starting running back Raheem Mostert has chipped cartilage in his knee, and because he opted for surgery in the long-term interests of his career (good for him), he's done for the season. Jeffrey Wilson is on the PUP list, so the Niners' remaining backs are sixth-round rookie Elijah Mitchell, who will likely start, along with 2020 UDFA JaMycal Hasty and third-round rookie Trey Sermon, a popular player in fantasy drafts who was a healthy scratch Week 1. Again, not ideal.

For the first time in a very long time, the Eagles are overwhelmingly on the right side of the injury report. And then intangibly, not to sound corny, but Lincoln Financial Field is going to be rocking on Sunday as fans are beginning to buy into the Eagles' positive vibes. I certainly like the Eagles at (+3.5), and what the hell... let's just pick them to win outright while we're at it.

I hate making homer picks. One week ago, I would have been steadfastly in the "Eagles lose in Week 2" column, even after making my prediction that Philly would beat the Falcons by one point in a tight one in Week 1. Obviously, the Eagles won by a lot more than one point and they looked like the best team in the NFC East in doing so.

And with a beat up Niners team traveling east to play an early afternoon game, I think the Eagles are actually in good shape to get win No. 2 and head into Dallas next Monday night leading the NFC East. I expect to see the team run the ball well again and hopefully the defense will be able to get Jimmy Garoppolo and control the game on both sides of the line.

I know, I know. Here I am picking the Eagles again after warning you against just that all offseason long. Yes, I only predicted six wins on the season and I didn't really want to change that after just one game. But you can only pick the games that are on the schedule, and after watching both these teams play a week ago — not to mention the 49ers injuries on both sides of the ball — it's hard not to like Philly's chances in this one.

If the Eagles offensive line can once again dominate, and if their defensive line can again wear down the opposition over the first 30-40 minutes and and take over late when it matters, then the hard work is done and Jalen Hurts and Co. should be able to score enough points to win this game. Will he be as good as he was in Week 1? He might not need to be. Hell, he didn't have to be that good for the Birds to win in Atlanta, but he was anyway.

If the Eagles start off 2-0, then things will really get interesting as they'll visit a suddenly banged-up Cowboys team on Monday Night Football in Week 3. But first, they'll have to take care of business against the 49ers, and the expectation here is that while it might be close, that's exactly what they'll do.

You might think I'd be shy about picking against the Eagles during their home opener, a week after picking them to lose a game they won in a blowout. Fact check: you'd be right! But I still have to go against Jalen Hurts and Co. here. Maybe I'll be the guy who reverse jinxes the Eagles into a perfect record this year, wouldn't that be fun?

2020 was a nightmare year for the Niners on the injury front and they still managed to win six games in one of the NFL's toughest divisions. Unlike last season, San Fran has protection if (and perhaps when) Jimmy Garoppolo is hurt or ineffective, and we already saw them mix rookie Trey Lance in successfully in Week 1. The final score of their opening win over Detroit is pretty misleading — they were in cruise control after they went up 28 points midway through the third quarter, with defensive star Nick Bosa admitting he had un-taped in preparation to sit out the latter stages of the game.

The case for Philadelphia? They looked slick as could be for a team under a new coaching staff, the Niners are exploitable through the air, and San Fran already lost a big contributor (RB Raheem Mostert) to a season-ending injury. They have a reasonable chance, especially with the Philly crowd behind them, but I'll still take the road favorite here.

I’ll go against the general consensus in the Philadelphia area right now that the Eagles will go undefeated and the Hall of Fame is now shaping a bust of Jalen Hurts.

I’ll base that on a simple equation: Reality > Eagles

The Eagles beat a bad team, far worse than many thought, including myself. Hopefully, Matt Ryan will remain in one piece for the rest of the season. Meanwhile, good luck blocking the 49ers’ Nick Bosa, Arik Armstead and Dee Ford. Jimmy Garoppolo and Trey Lance combined to put up 44 points against the woeful Detroit Lions, who did manage to score 33, which made things interesting at the end when the game was over.

I do have an idea of the Eagles’ template to victory. If something works, don’t be afraid to go back to it over and over again, and win with defense.

Reality catches up this week. The mediocre Eagles won’t get by one of the better teams in the NFC. Canton will have to wait before it molds the Hurts bust—which could happen one day. Just don’t start piling up the clay yet.

MORE: Shander: How Eagles can continue to prove doubters wrong

This pains me. There’s nothing more I want to see than the Eagles picking up right where they left off from last week. I love where they are heading and think there’s a lot to build on, but the matchup will be too tough this time around. The Falcons are dreadful but the Eagles did their part, I don’t see it nearly as easy this time around. Niners win, 31-28.

The feel-good Eagles' opening win is replaced by a significant test in Week 2 when the San Francisco 49ers invade Lincoln Financial Field. The Niners have arguably the best running scheme in the NFL, something that matches up well against the Eagles' perceived weakness on the defensive side of the ball. The 49ers also have a game-wrecker on the defensive side in Nick Bosa and one of the leagues' best linebackers in Fred Warner. In other words, this should give us a much clearer view as to what Nick Sirianni and the Eagles really are after the Week 1 rout of the talent-deficient Falcons.

What Kyle Shanahan doesn't really have is a superstar quarterback, at least until he gets rookie Trey Lance up to speed. For now, Jimmy Garoppolo will make sure the Eagles stay in this one into the fourth quarter where a game-shifting play should define it. Because the 49ers have more established playmakers, let's default to them.