What they're saying: Where does Eagles' Jalen Hurts rank among NFL QBs?

After an impressive performance in Week 1, the second-year quarterback has some people talking... 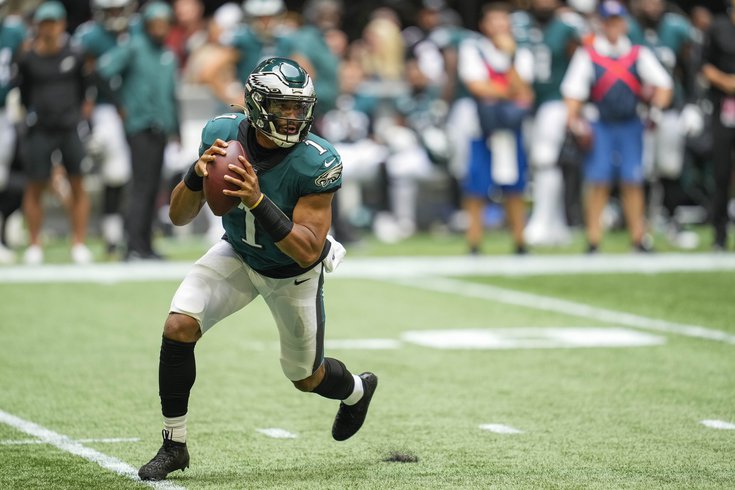 A game into the Eagles season, and it suddenly feels like expectations are being adjusted. And while it's almost certainly too early to do that — one win over the Atlanta Falcons does not a contender make (did I do that right?) — there are plenty of reasons for hope and optimism among the fan base.

As we pointed out in our last What They're Saying earlier in the week, if nothing else this Eagles team seems like it's going to be a hell of a lot more fun than the last two years, and it's becoming pretty clear that starts with quarterback Jalen Hurts, whose personality and leadership abilities are hard to ignore. Add in a rookie head coach who has somehow been able to keep things loose while also preaching constant competition, and this Eagles team feels like an easy one to get behind.

And if they win a few more games early in the season — when their schedule is supposed to be its most difficult — the entire Delaware Valley is going to get behind them, if they aren't there already after that 32-6 thrashing of the Falcons.

The Birds will face a tougher test this week when they host the 49ers in their home opener. Despite that impressive Week 1 victory and San Francisco already being banged up at several key positions, the Eagles remain 3.5-point underdogs on Sunday. Before we fully turn our attention to that game, let's take a look at What They're Saying about Sirianni and his team...

We'll start at quarterback, where there's obviously plenty of good things to talk about after Jalen Hurts threw for three touchdowns on Sunday. Over at ESPN, former GM Mike Tannenbaum ranked every NFL quarterback from Week 1, not solely based on the most recent game, but rather a combination of that and his confidence in that QB going forward. Consider it like power rankings, but just for the QBs.

I say that because if it was based on just Week 1, Eagles fans would be furious over Jalen Hurts' place on this list. And they still might even knowing that it's taking the bigger picture into consideration, but given where he started the season on most pundits' lists (near the bottom, and in some cases not on them at all), closing in on the Top 20 is not a bad start after just one game. And he has plenty of time to continue to climb.

We didn't want to take all of Tannenbaum's list and run it here, so we just clipped the part of the list where Hurts was, with a few of the QBs who are ahead of him and a few who are behind him, as well as their Week 1 QBRs, so you can see the (very interesting) company he's keeping.

For what it's worth, Hurts' QBR ranked 11th out of 31 qualified quarterbacks in Week 1, which might be lower than what some fans were expecting and might make the 21st ranking a bit more understandable if you had problems with it on first glance.

Beyond just the list, Tannenbaum also included the following snippet on Hurts...

The Philadelphia Eagles' Jalen Hurts was one of the biggest surprises of the opening week, and a big part of the credit should go to how great his tackles -- Lane Johnson and Jordan Mailata -- played. They gave Hurts a clean pocket in which to operate, and the line's pass block win rate for the week was No. 2 in the NFL at 75%.  [ESPN]

A lot of Hurts' success on Sunday came on short passes, causing him to have a league-low yards per attempt, but that also led to a sky-high completion percentage. So, which do the Eagles coaches prefer? Here's more from EJ Smith at the Inquirer...

At 77.1%, Hurts has the third-highest completion rate in the league, trailing only Seattle’s Russell Wilson and Denver’s Teddy Bridgewater. He completed 27 of 35 attempts for 254 yards and three touchdowns against the Falcons and gave reason for optimism going into Sunday’s home opener against the San Francisco 49ers.

Over at The Athletic, Zach Berman's 10 observations also included some talk of Hurts' completion percentage. But the veteran beat writer also pointed out that there might be an even greater indicator of success out there that the Eagles coaches might want to latch on to...

The improvement in Jalen Hurts’ completion percentage shouldn’t be rationalized because the game plan called for high-percentage passes. Completion percentage is a metric that matters to this coaching staff. Hurts completed 77.1 percent of his pass attempts, which ranked third in the NFL in Week 1. It’s a major jump from his 52 percent figure last season, which ranked last among quarterbacks with at least 100 pass attempts. He didn’t have a single start in which he topped 56.7 percent.

The staff has a completion percentage benchmark that they expect Jalen Hurts to meet or exceed — one that they choose to keep private. ...

It wasn't just Hurts who had a solid performance against the Falcons, it was also his rookie head coach. Over at BGN, John Stolnis ranked the Eagles' nine most recent head coaching debuts (going back to Dick Vermeil), and Sirianni came out looking pretty good.

Fresh off their 4-11-1 season, Sirianni’s Eagles looked polished, professional, and downright scary in their efficiency. Jalen Hurts looked like a star, the dual running back threat of Miles Sanders and Kenny Gainwell were solid, the tight ends chipped in, the young wideouts produced and the offensive line mowed Atlanta defenders to the ground.

After a rough first quarter, Jonathan Gannon’s defense rallied and shut Matt Ryan down completely. It was a pleasant and enjoyable game and gave Eagles fans hope that maybe, just maybe, the 2021 season won’t be a gap year after all.  [Bleeding Green Nation]

We've gone over some Hurts rankings and some Sirianni rankings, but what about rookie receiver DeVonta Smith? Over at PFF, they ranked all 32 first-round picks from this years draft, and the Alabama product and Heisman winner came in fourth at his position.

Smith’s first NFL target was a touchdown, showing an effortless ability to capitalize on a rub from his teammate on the defensive back to open up space for the throw. Smith ended the game with six catches for 71 yards on seven targets and looked every bit the part of an impressive NFL receiver right out of the gate.  [PFF]