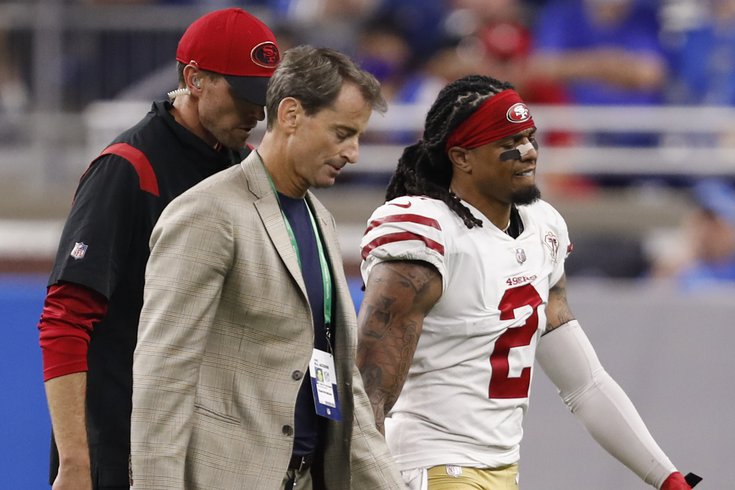 The Niners will be without CB1 Jason Verrett.

Over the last few years, the Philadelphia Eagles have typically gone into games with more injuries than their opponents. So far in 2021, they have managed to stay relatively healthy, and will enter Week 2 in much better shape than the San Francisco 49ers.

• S Rodney McLeod: The Eagles will have 21 of 22 starters available Week 1, with McLeod being the lone exception. Marcus Epps started in place of McLeod Week 1, but left early with a concussion.

• S Marcus Epps: As noted above, Epps started in place of McLeod Week 1. If he's good to go for Sunday, he'll likely start again. If not, it'll be K'Von Wallce, and the Eagles will probably call up Elijah Riley from the practice squad for depth.

• TE Tyree Jackson (IR): Jackson suffered a broken bone in his back during joint practices with the New England Patriots. The injury did not require surgery, and his recovery period at the time was deemed by the team to be 8-10 weeks. That was four weeks ago, so (checks math) Jackson should be back 4-6 weeks from now.

• LB Dre Greenlaw: Greenlaw is a third-year pro who had 184 tackles in his first two season in the NFL (in 29 games). He will have surgery on his groin, and is reportedly expected to miss 6-8 weeks. According to Nick Wagoner of ESPN, Greenlaw appeared to suffer the injury during a pick-six against the Lions Week 1. Greenlaw did not return to that game, and was replaced by Azeez Al-Shaair in the lineup.

• CB Emmanuel Moseley: The Niners will very likely be without their top two cornerbacks in Moseley and CB1 Jason Verrett. We covered their backups in our five matchups to watch.

• DL Arik Armstead: Armstead is a long, lean DE-DT versatile lineman who had 10 sacks in 2019.

• DT Javon Kinlaw: Kinlaw is a 6'5, 319-pound beast of a man who the Niners selected with the 14th overall pick in the 2020 draft. The Niners are banged up at corner, at linebacker, and along their D-line.

• LB Marcell Harris: With Greenlaw out, if Harris can't go, the Niners' LB depth will be further depleted. Harris played in all 16 games in 2020, starting four, and making 37 tackles.

• CB Jason Verrett: Verrett has had one of the most injury-plagued careers in NFL history, as he has missed 73 games over his career, which began in 2014. He has only played in 40 games. As such, it was very risky for the Niners to be relying on him so heavily this season, as Verrett was by far their best cornerback. He is done for the season with a torn ACL.

• RB Raheem Mostert: Mostert was the Niners' starting running back, and in his sixth year with the Niners, he is averaging an absurd 5.7 yards per carry. Mostert has "chipped cartilage" in his knee, an injury the Niners said earlier in the week could take eight weeks for recovery. Instead, Mostert is opting to have surgery on his knee to preserve his long-term career aspirations, which will end his season.

• RB Jeffrey Wilson: Wilson is a hard runner who rushed 126 times for 600 yards and 7 TDs for the Niners in 2020. He's on the PUP list as he recovers from a torn meniscus.

The Niners' remaining running backs are sixth-round rookie Elijah Mitchell, third-round rookie Trey Sermon, and 2020 UDFA JaMycal Hasty. Mitchell led the Niners with 19 carries for 104 yards and a TD Week 1 against the Lions.

• S Tarvarius Moore: Moore was a third-round pick of the Niners in 2018, and until this season had never missed a game. He has 48 career games played, with 13 starts, serving as their third safety behind Jimmie Ward and Jaquiski Tartt. In 2020, Moore had 52 tackles.

• DE Jordan Willis: The Niners traded for Willis during the 2020 season. He played 7 games for them, and had 2.5 sacks.