Eagles mailbag: How many games look more winnable now than they did a week ago? 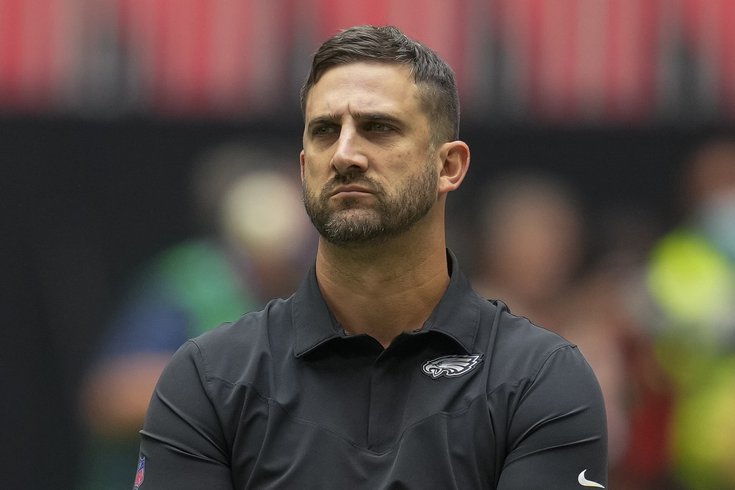 Question from Brian: Did any of the Eagles' future opponents' Week 1 performances make you reevaluate the Eagles' chances of beating them?

Teams I now think the Eagles have a better chance of beating than they did before the season began:

Teams I now think could be more difficult opponents than originally anticipated:

I had the Eagles at 6-11 during the offseason, and bumped them up to 7-10 entering the season. Let's go ahead and upgrade them again to 8-9.

Question from Kimmy Jempski: Which 3 former Eagles (still playing) would you bring back right now to make them a playoff team?

Every year, Brandon Gowton puts together a list of former Eagles still in the NFL, so that's helpful for this question. It's not a very compelling menu of players. My three:

Question from Sy: Outside of maybe Sam Darnold, are Daniel Jones and Taylor Heinicke the two worst starting QBs in the NFL?

No. To begin, I don't view Heinicke as a starter, and Jones at least has something with his running ability. My bottom five, in terms of who I would not want to have as my quarterback:

Question from DB: J.J. Arcega-Whiteside seems to be the type of guy Sirianni will keep around for a long time. His effort is commendable. We need to stop comparing him to DK Metcalf.

I would say that J.J.'s roster spot was in grave danger until Travis Fulgham basically did nothing in training camp and the preseason games. His TD against the Jets may have sealed his spot. For now, he's still probably a fringe roster guy with nothing guaranteed beyond this season.

I agree his effort is commendable, and he has shown self-awareness about what he has been as a player these first two seasons. His head is in the right place. I think he's an easy guy to root for, and he at least seems to be finding a role — even if just a small one — on this roster.

As far as the comparisons to Metcalf, I believe those have been directed more at front office for picking the wrong guy than at J.J. himself, though certainly I'm sure J.J. has caught more than his share of shrapnel. (Actually, on a side note, it's been noted that the other guy the Eagles might have considered instead, Parris Campbell, has also done nothing so far.)

Brandon Graham went through that early in his career, when he was compared endlessly to Earl Thomas and later Jason Pierre-Paul. Obviously, you don't hear anyone complaining about the Eagles picking Graham anymore. If J.J. can become a productive player over time, you'll hear less about Metcalf, but the reality is that critics are highly unlikely to ever let that go until he does.

Question from GoBirds: Is Boston Scott a potential trade candidate given the running back injuries across the league to teams like the Niners and Ravens?

I think the running back injuries across the league are reminders that running backs get hurt a lot, and I’d just keep Scott instead of whatever meager return you might get for him.

Question from All In: Would you agree that the Eagles have much better chances at sweeping the Giants and Washington after last weekend (and Thursday night)?

I don’t think they’re sweeping Washington. Probably a split there. I do think the Giants are very sweepable. Is that a word? Well it is now. I never understood what anyone saw in that team, and they look even worse than I anticipated.

People strangely think Taylor Heinicke was the second coming of Brett Favre Thursday night when he really didn't look like anything more than your standard issue mediocre backup to me. Still, their roster is pretty good otherwise and they're coached well.

Question from Live Chad: How many full games would Carson Wentz need to play for the Eagles to get the 1st rounder? I'm guessing we need 12 more, does that sound right?

In Week 1, Wentz played a high number of snaps (76). So yeah, if he starts and finishes 13 total games, the Eagles will be in good shape for that pick.

I'm still not super encouraged that he's going to survive the season. He took a beating on Sunday.

Question from Bedoya: Why does Jason Garrett still have a job in the NFL?

¯\_(ツ)_/¯. I think this is the appropriate place to embed this tweet, though, which was from after the Giants' Week 1 loss:

Giants gave Kadarius Toney 2 scripted touches and then said that’s enough of you. 5 snaps yesterday. 3 were the final 3 plays of the game.

Question from Nuke: Was Arthur Smith a candidate for the Eagles head coaching job? And if so, how fortunate are Eagles fans that he decided to pass?

He did interview with the Eagles. I don’t know if they made him an offer, so it’s difficult to say whether or not he passed them over. I’m with you that Atlanta’s game plan stunk Week 1.

Question from Chloris Leachman: Do you think Matt Ryan walks away after this season? I mean he's staring at a serious injury every week out there.

I think the Falcons knew what they were before the season began, hence their willingness to trade Julio Jones. I wouldn’t rule out a trade of Ryan to a contender if some veteran quarterback goes down.

Question from Brian: Are you surprised that fans had water sewage falling on them during the game at FedEx Field?

If someone were to ask me to predict which stadium that could possibly happen at, my first guess would be FedEx.