Despite 66-to-1 odds, Jared Isaacson goes all in on Philly while orbiting Earth 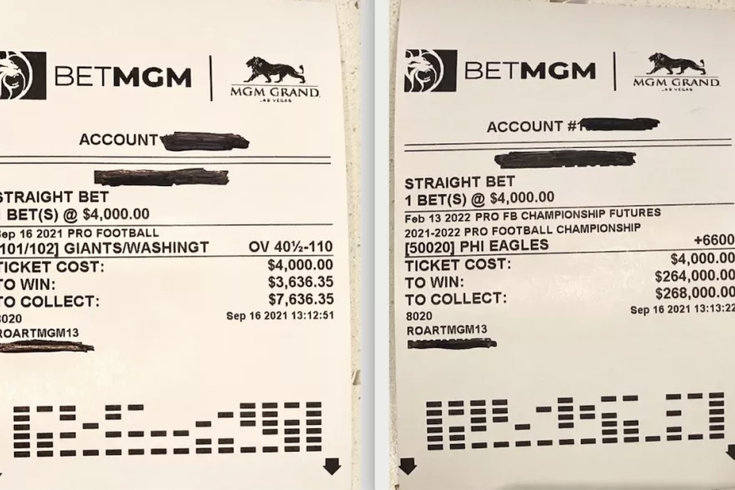 The Philadelphia Eagles face steep odds to win Super Bowl LVI, but billionaire pilot Jared Isaacson picked the Birds with a $4,000 bet placed from outer space. Isaacson is leading the SpaceX Inspiration4 mission, the first all-private orbit around Earth. His two bets Thursday night are the first ever sports bets placed from space.

If you have money to spend on private space travel, you certainly have money to bet the long odds that the Philadelphia Eagles will win Super Bowl LVI next February.

And if you put those two things together, you can make a little history.

On Thursday, the first-ever sports bet was placed from outer space aboard SpaceX's Inspiration4, the first all-private orbital mission around Earth. The three-day trek, led by four American crew members, is a charitable endeavor to support St. Jude's Children's Research Hospital in Memphis.

The crew of #Inspiration4 had an incredible first day in space! They’ve completed more than 15 orbits around planet Earth since liftoff and made full use of the Dragon cupola. pic.twitter.com/StK4BTWSA6

The commander of Inspiration4 is Jared Isaacman, the billionaire founder of payment processor Shift4 Payments. The 38-year-old pilot and amateur astronaut has an estimated net worth of about $2.5 billion, according to Forbes, and has made a habit of pursuing world records and world firsts.

From space, Isaacson approached BetMGM about placing two NFL bets Thursday, each in the amount of $4,000 with a potentially massive payout on the Eagles Super Bowl pick.

The first bet was nothing too adventurous. Isaacson put money on the New York Giants and Washington Football Team scoring a combined 41 points on "Thursday Night Football." Washington won 30-29, so that was just a solid bet and Isaacson collected $7,636.35.

The 1-0 Eagles, who looked great in a season-opening win over the hapless Falcons, still only have 66-to-1 odds of winning the Super Bowl. They're a serious long shot, even if they prove to be a playoff team over the course of the year.

But in the event that the Eagles somehow pull it off, Isaacson stands to collect $268,000.

All proceeds from both bets will support St. Jude's in Memphis. Isaacson already has pledged $100 million of his own money toward the hospital, with a fundraising goal of $200 million.

Isaacson may know a thing or two about defying odds.

In 2009, he set a world record for circumnavigating the globe in a light jet, making the flight in 61:51:15 — about 20 hours faster than the previous record of 82 hours. That mission was part of a fundraising event for Make-A-Wish Foundation of New Jersey, where Isaacson grew up in Westfield, Union County.

Given that he's a North Jersey guy, it's not immediately obvious why he'd be an Eagles fan. But Shift4 Payments is based in Allentown, and a few items from the area were taken to space with the crew to be auctioned as part of the St. Jude's fundraiser.

Maybe Isaacson just thinks the Eagles are that good and they're going to shock the NFL this season. If they do, they'd be among the most impressive and unexpected Super Bowl winners in recent memory.