Bart Scott on ESPN: 'I'll shave my eyebrow off' if Eagles beat 49ers

The former NFL linebacker made the bold wager during an episode of 'Get Up!' 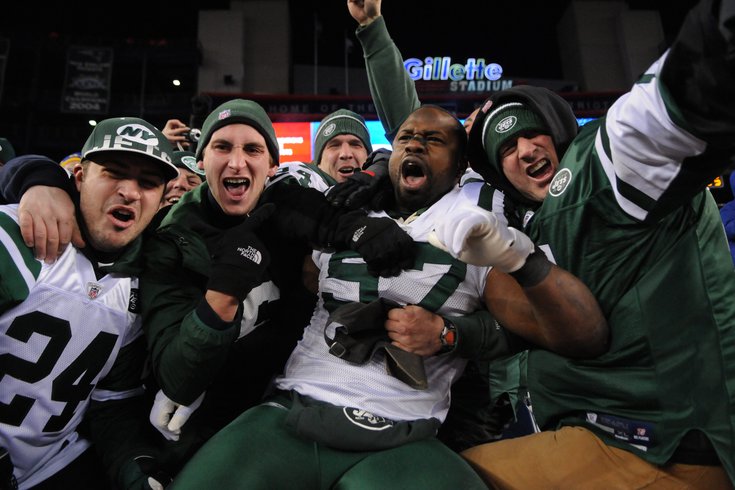 Former NFL linebacker Bart Scott, middle, has an eyebrow riding on Sunday's game between the Philadelphia Eagles and the San Francisco 49ers at Lincoln Financial Field. Scott, who's now an analyst for ESPN, made the bold wager during an episode of 'Get Up!' on Thursday, Sept. 16, 2021.

Is there anyone in the country more confident that the Philadelphia Eagles will lose to the San Francisco 49ers on Sunday at Lincoln Financial Field than Bart Scott? This writer isn't willing to bet an eyebrow on it.

Scott, a former NFL linebacker turned ESPN analyst, said he will shave an eyebrow off if the Eagles beat the 49ers during a segment of "Get Up!" on Thursday morning. He also predicted that quarterback Jalen Hurts will struggle against an "elite" opponent — and that Eagles fans will be quick to return their Hurts jerseys after the game.

"Everybody's in love with Jalen Hurts this week. Everybody went out and bought jerseys. Jersey sales up 500%, but I'll tell you, I'll bet you the Philadelphia fans didn't do — they didn't pop that tag off," Scott said. "They tucked it in, because this week, they're gonna be returning all those jerseys 'cause they got the San Francisco 49ers that look elite."

Hurts and rookie DeVonta Smith had two of the best-selling jerseys in the NFL after their performances in the Eagles' 32-6 rout of the Atlanta Falcons to open the 2021 campaign. Hurts completed 27-of-35 passes for 265 yards and threw three touchdowns, including a beautiful pass to Smith, his former college teammate, on Philly's opening drive.

Scott, however, isn't buying the Hurts hype — and said Eagles fans will want to trade in their jerseys after the matchup against the 49ers.

"They gonna be spraying Febreze on them (saying), 'I didn't wear it; I promise I didn't,'" Scott said.

Enter Damien Woody, a voice of reason. The former NFL offensive lineman and two-time Super Bowl champ was quick to point out to Scott that the "elite" 49ers defense surrendered 33 points to the Detroit Lions and nearly squandered a Week 1 victory.

"Did we watch ... the same team?" Woody asked before hyping up the Eagles.

"I'm a big boy. I understand line play. Them boys are elite up front on both sides of the football," he said. "They got young dogs on offense, on the offensive side of the football, as far as offensive skill guys. ... They got big dogs on the defensive line that can eat, and you know that's where it starts."

Scott still wasn't convinced, though, and that's when he made his bold wager.

"If the 49ers lose to the Philadelphia Eagles, I'll shave my eyebrow off."

"I bet you that, if the 49ers lose to the Philadelphia Eagles, I'll shave my eyebrow off," Scott said, leaving Woody speechless.

"We know you be beating your face up," the former linebacker continued, mocking Woody. "You're gonna be drawing your eyebrows on. Put your money where your mouth is, D-Wood. Put your eyebrows up; right one, left one, I don't care."

It's unclear if Woody took Scott up on the bet, but you know the former offensive lineman will be quick to remind Scott of it on "Get Up!" next week if the Eagles pull off the win as three-point underdogs.