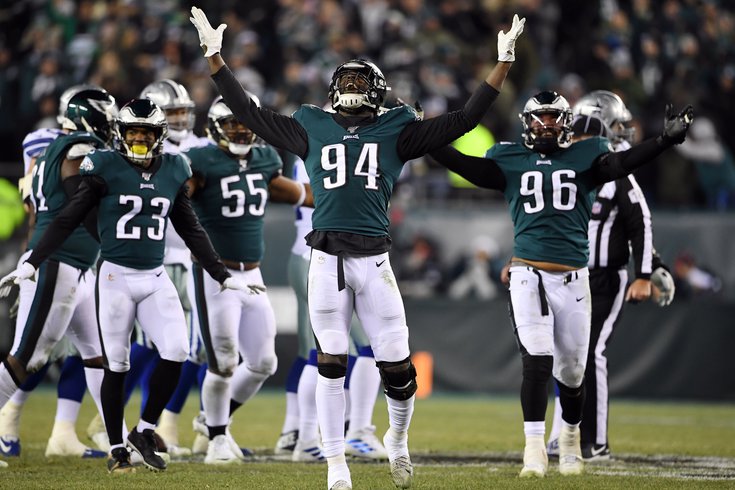 The Philadelphia Eagles announced on Saturday that they have signed defensive end Josh Sweat to a three-year extension that will keep him under contract in Philly through the 2024 season. According to Ian Rapoport of NFL Network, it's worth between $40-42 million, with $26.92 million guaranteed.

Terms: It’s a 3-year contract extension for $40M with a max of $42M and with $26.92M guaranteed, per @Chris_Coy of @VanguardSG. Sweat gets a $10M signing bonus. The $2M in incentives is a one-time escalation based on consecutive years of 7 sacks. https://t.co/TagtsVnhxX

Sweat had something of a breakout season in 2020, when he had 38 tackles, 6 sacks, 3 forced fumbles, and 12 QB hits in a reserve role. If you'll note, none of his 6 sacks were gifts. They were all earned with good rushes, often against top tier left tackles.

Sweat followed up his 2020 season with an outstanding training camp, and a solid showing Week 1 against the Atlanta Falcons, during which he had 6 tackles in 40 snaps.

If Sweat builds on his 2020 season with a quality 2021 season, he might have broken the bank during 2022 free agency. As such, an average annual value of $13-14 million is potentially a bargain for a player at a premium position. There are 19 edge rushers who make at least $14 million per year, according to OverTheCap.com.

This is the second major Eagles contract extension in as many Saturdays, as the Birds locked up LT Jordan Mailata long-term a week ago. Both players were Day 3 picks during the 2018 NFL Draft. Sweat was taken in the fourth round (130th overall), while Mailata went in the seventh round (233rd overall).

Sweat's extension is an interesting development in terms of Derek Barnett's future with the team. Barnett was the first-round pick (14th overall) of the Eagles during the 2017 NFL Draft, and while he produced more than Sweat earlier in their respective careers, there's an argument to be made that Sweat passed Barnett in the eyes of the Eagles. During the 2021 offseason, the Eagles had talks with Barnett's representation about a contract extension, but a deal never got done and the Eagles kept Barnett on his fifth year option at a little over $10 million. He is scheduled to be an unrestricted free agent in 2022.

MORE: Five college prospects who could interest the Eagles in the 2022 NFL Draft | Week 2 NFL picks: Rounding up the experts' predictions for Eagles vs. 49ers | Eagles-49ers injury report, with analysis