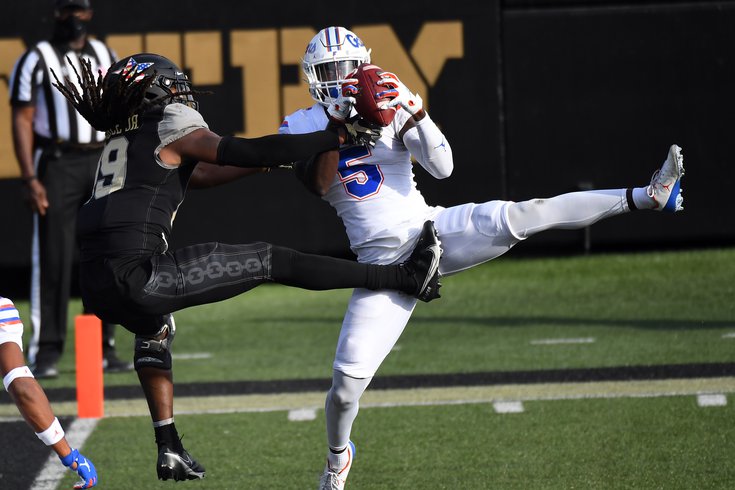 Cincinnati had one of the best defenses in the nation in 2020, and arguably their best defensive player is Sanders, who had 7 sacks and 10.5 TFLs in 10 games.

Sanders has an intriguing combination of length, explosiveness, and speed, shown here.

He'll have to develop his speed-to-power game in his final season at Cincy and at the next level. In the Eagles' scheme, he would be a nice fit at RDE, if the Eagles are unable to retain Derek Barnett and/or Josh Sweat.

McCrary-Ball is an older prospect (he enrolled in 2016), and he has some injury concerns (torn ACL in 2020), but he's an athletic player, as he came in at No. 23 on Bruce Feldman's freaks list.

This is his third time on this list. He missed 2020 with a torn ACL, and that was a significant blow to the Hoosiers considering he was arguably their best defender. But he told me a few weeks back that he feels every bit as explosive as he was before the injury, when he was running an electronically timed 4.41 40 and clocking almost 23 MPH, and he says he’s even stronger. He’s a 405-pound bencher and power cleaned 365. McCrary-Ball — the younger brother of former Georgia Tech quarterback Reggie Ball, former NFL defensive back Marcus Ball and the nephew of former Ravens standout Michael McCrary, said he’s dropped close to 10 pounds to get ready for 2021 and plans to play around 207-210; earlier in his career he played at 223.

“I’m back. I feel lighter for sure,” he said, adding that he’s excited that he’s retained all of his strength in the bench and squat even at the lighter weight.

At Indiana, McCrary-Ball is sort of a slot corner / safety hybrid who is often used as a blitzer. He's a good tackler who can intimidate opposing wide receivers, but he only has 3 INTs and 12 pass breakups in 41 career college games. If the Eagles liked JaCoby Stevens coming out, I believe that McCrary-Ball could be a similar linebacker convert project. Probably a late Day 3 guy.

Bonitto had 9 sacks in 10 games in 2020 for Oklahoma, so he obviously has some pass rush skills. His twitchy speed and quickness are obvious, as he's difficult for offensive tackles to block in space. He can win with speed around the edge, and he can slither through gaps, however, he is not a player who is going to line up on the line of scrimmage in the NFL and be be asked to set the edge all day. A look at his bowl game against Florida last year:

Bonitto is a player who would have never been of interest in Jim Schwartz's scheme, but could be in Jonathan Gannon's as a SAM linebacker. As you can see in the above video, he has the ability to drop into zone coverage at times, but he was not asked to play difficult assignments in coverage.

Bonitto is being projected by some as a first-round pick, because he's rangy and explosive. I don't think he should be of interest to the Eagles that high, but he seems to be a player who would fit their new scheme nicely at a position where they don't yet have this type of player. Maybe in Round 2 if Bonitto plays well again in 2021.

Elam will give up separation on occasions, but it's worth noting that the Eagles got wrecked by big receivers in 2020, so Elam's fit with the Eagles is rather obvious for a roster that badly needs long-term cornerback help. He'll have a big test against Bama's ridiculous offense.

MORE: Eagles mailbag: How many games look more winnable now than they did a week ago? | Eagles vs. 49ers: Predictions, betting odds and more for Week 2

Enagbare is tailor-made for a defense that values versatility, as he plays the "Buck" linebacker spot in South Carolina's defense. The short explanation of the "Buck" position is an edge rusher who will sometimes line up inside on obvious passing downs, but who also sees time as an off-ball linebacker, tasked with coverage duties.

To be able to play the "Buck" position effectively, first and foremost you have to be able to rush the passer, but you also have to have size to hold up at the point of attack against the run, and have enough athleticism to cover. It's almost sort of unrealistic to expect a player to be able to do all those things well, but Enagbare does. You can see the variety of positions that he'll play throughout games here:

Enagbare is a very clear and obvious target for the Eagles' defense, who would help allow Gannon to to play a lot of different defensive looks without having to leave the field.