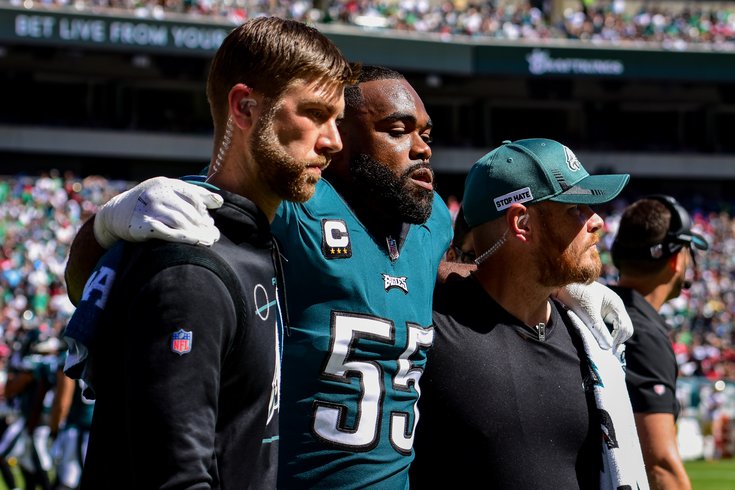 Eagles defensive end Brandon Graham is helped off the field.

We still about to shock the world! I will just be leading from the sidelines this year working to be great for 2022. Appreciate all the love and now it is time for guys to step it up. U have to find the treasure in every situation! #eagles

He doesn't say what the injury is, but with the talk of him focusing on 2022, it sounds like the torn Achilles' that's been reported by multiple outlets.

The Eagles' 17-11 defeat at the hands of the 49ers wasn't the only loss the Birds suffered at Lincoln Financial Field on Sunday afternoon.

After losing Brandon Brooks to what could be a serious pec injury, and with the Eagles leading San Francisco by a field goal late in the first half, defensive end Brandon Graham came up limping in what appeared to be a non-contact situation while pursuing 49ers' quarterback Jimmy Garoppolo. He was down on the field in pain, and the reaction of his teammates suggested this was a bad injury. Graham was unable to put weight on his leg as he was helped to the sideline before the cart eventually carried him to the locker room.

According to Derrick Gunn and Adam Schefter, it appears the veteran defensive lineman will be done for the season after suffering a torn Achilles' tendon on the play.

After the game, Nick Sirianni was asked about Graham's injury and didn't want to reveal the severity of it, but his vagueness he likely confirmed that report.

"We’re fearful for what it might be," Sirianni said. "I don’t want to say what it is until we know for sure."

Graham, 33, was poised for a big season after posting eight sacks and making his first Pro Bowl a season ago, and his impact on the line was immediately clear, as the unit didn't look the same for much of remainder of the game. Beyond the Xs and Os, however, is where this team may miss Graham most of all, as he's the leader of the defense.

Even the other leaders look to Graham as a leader.

"That sucks for BG, man," Steven Nelson said after the game. "I have a lot of respect for that guy as a leader."

“It’s terrible,” Lane Johnson says of Brandon Graham injury. “Probably one of the greatest humans I’ve had the pleasure of playing with … He’s the heartbeat of this team.”

But the person hit hardest by the loss of Graham might his locker mate, Fletcher Cox, who was visibly upset on the field after seeing his teammate go down.

"I mean, it’s always tough and it was a pretty emotional moment for me to see BG limp off the field because I think me and BG – I know me and Brandon have played so much ball together and to see him walk off the field was pretty rough for me," Cox said. "But we know Brandon, he’s in a good spot right now and we’ll talk once he figures out what’s going on. At the same time, we got his back and we’ll go from there and get ready for the next game."

But in the moment, Cox said he had to just try to go back to business as usually.

"It’s just one of those things. It’s football and things happen, you know? People get hurt, players get hurt, the best get hurt," he added. "BG has been my locker mate since I got here and now we still get to laugh and talk about things, it’s just he won’t be on the field on Sunday, it’ll be in the locker room. So, I’m looking forward to that and making sure he stays in a good place."

While the Eagles can't replace Graham's presence as a person, they'll have to try to replace his on-field production. Luckily, they have some depth to behind him, and fans can expect to see plenty of Derek Barnett, who had a bad game against the Niners, and Josh Sweat, who just signed a three-year extension, as well as more Ryan Kerrigan and rookie Tarron Jackson.