First and foremost, the Eagles need to win Saturday, but their path to the Super Bowl could be wild for fans, writes Tyrone Johnson. 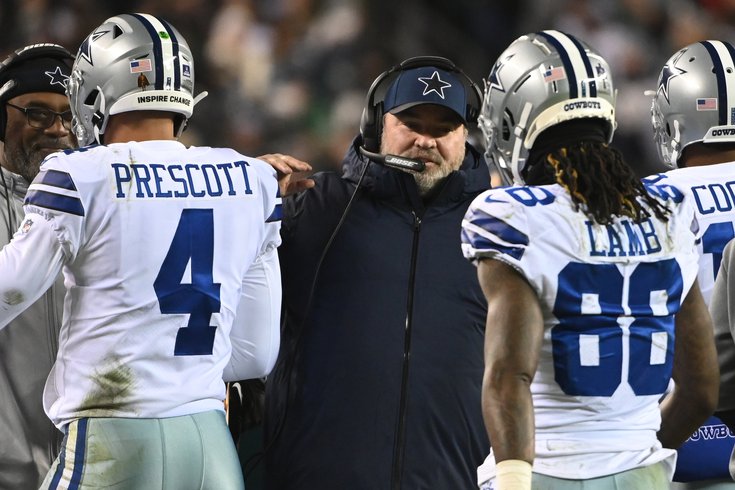 After the best regular season in franchise history and the first-round bye, the Eagles are now in full-on prep mode for the Giants at home at the Linc Saturday night. 19 weeks of appetizer all for the main course to finally begin.

Jalen Hurts isn’t even on the injury report anymore and Lane Johnson is going to attempt to play. Outside of Avonte Maddox, the Eagles have all their starters available. The atmosphere will be electric, but most of all, it will be fun. It doesn’t get better than this entering the playoffs. There are some who are concerned about the Giants due to the Eagles' Week 18 performance when they were as vanilla as possible and never trailed against the Giants’ backups. I counter with the fact the Eagles earned the bye for the chance to play a team like the Giants: well coached, but flawed. The Seahawks were never realistic, and the Cowboys would be a tougher matchup.

Speaking of the Cowboys, however, I was pondering what the most fun path through the Super Bowl would be and unfortunately it includes them.

We know Step 1 on the journey will be an NFC East team. The division that used to be called the “NFC Least” has three teams left in the playoffs. I expect the Eagles to win and cover, although I don’t care how they do it. Just win the game. I have searched for a worry, and I can’t find one. After that is could be very interesting. Dallas are underdogs against the 49ers Sunday. This is a possible conundrum if you are looking at this purely from a "fan fun" perspective.

We all hate the Cowboys, as we should. Whenever they lose, it's a great day for the nation. On the other hand, an Eagles vs, Cowboys NFC Championship Game is much more fun than Eagles vs 49ers. No disrespect to Brock Purdy, but after an Eagles victory, the national media would use him being a third stringer as the excuse to not give the Eagles credit.

I have never and will never root for the Cowboys, Celtics, Mets, Rangers etc., and I will not start now. Speaking purely from a fun perspective, it would bring more enjoyment to the fanbase if the Cowboys were the opponent. Dallas fans would have to be silent for a long time when the Eagles beat them with a trip to the Super Bowl on the line. No more Dak Prescott is an elite QB talk, no more Ezekiel Elliott “feed me” mess in a half shirt, and more Jerry Jones red faced with tears streaming down his face in his suite. It would be glorious sending all of them back to their '90s VHS tapes again.

After that would be the Super Bowl and there are a bunch of fun options, but which would be the most fun? Obviously, of the four choices, the Bengals are fourth. Outside of Joe Burrow being in the same draft as Jalen Hurts, and Jamar Chase vs Devonta Smith, there isn’t a whole lot there. Again, this is just speaking about fun and Cincinnati just doesn’t cut it.

Next would likely be the Bills. The NFC’s best fans vs the AFC’s best fans. Sean McDermott vs the team where he started his NFL coaching career as an assistant and later defensive coordinator. The Damar Hamlin situation has grabbed the nation (thank God he is doing so well) and they are generally a likeable bunch. In another year this would be amazing, but there are still two options that would be even more fun.

Next would be Andy Reid, Patrick Mahomes and the Kansas City Chiefs. Reid obviously was here 14 years and made five NFC title games, including four in a row with a single Super Bowl appearance against the cheating Patriots (I’m not still bitter). The storylines would be plentiful of course for the fans and it would put former Eagles like Brian Westbrook, for example, in a bind where they must choose between their coach and their former franchise. I think the vast majority of Eagles fans root for Andy when he is not facing the Eagles. So many fans would have stories about the Reid era while we talk for two weeks about how the Eagles can defeat them. Jalen Hurts’ resume would instantly be legendary if he was to beat the Giants, Cowboys, and then Mahomes in a single playoff run. If Nick Sirianni was able to out-duel Reid in a Super Bowl after the best regular season in team history, including any year that Reid ever had, he would be a “made man” in Year 2. Where this loses some steam compared to the No. 1 team is that the Eagles had two head coaches between Reid and Sirianni.

The Super Bowl opponent that would be the most fun, though is also the least likely, the Jacksonville Jaguars. The only coach to win the Super Bowl with the Eagles vs. the coach that replaced him and immediately did even better (in the regular season). While there are a lot of new players on the roster, a ton of players who were coached by Doug Pederson and then Sirianni, including three starters on the offensive line and the current franchise quarterback. They would cut to the statue every single day on every national show. We would get to relive the 2018 Super Bowl constantly while we prepare for another one. The whole situation would seem like a movie and best of all the Eagles who blow them out.

Add it all up and Giants-Cowboys-Jaguars is the most fun Eagles’ fan scenario followed by Giants-Cowboys-Chiefs. Who knows how this all plays out. As long as the Eagles are hoisting the trophy, I am extremely happy. At the same time if the Eagles are going to win their second Super Bowl in five years, why not do it in the grandest way possible? It all starts Saturday night and I can’t wait.