Eagles vs. Giants: Five matchups to watch, when the Eagles have the ball 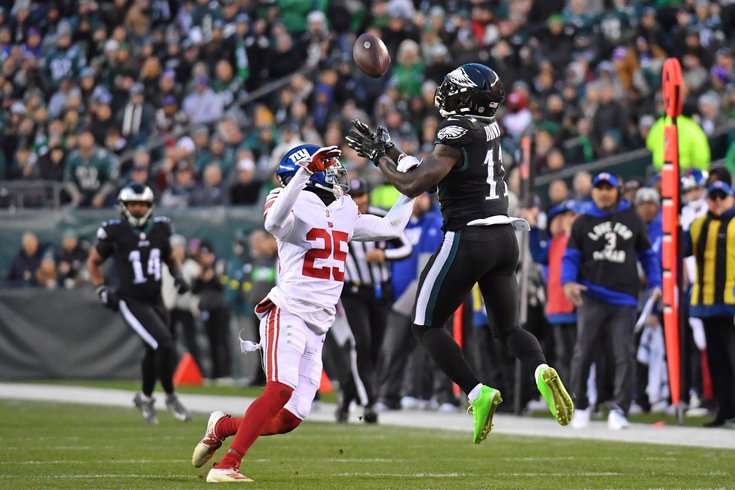 If the Giants blitz, the Eagles' stud wide receivers need to make them pay down the field.

The Philadelphia Eagles will face a familiar foe in the New York Giants on Saturday, and they're especially familiar this year since it will be the two teams' third matchup in 42 days.

Normally, we point out five matchups to watch between the Eagles and their upcoming opponent during the regular season. But this is the playoffs, baby, so let's do five matchups on each side of the ball. We'll start with the Eagles' offense vs. the Giants' defense.

When asked about the possibility of Giants defenders targeting his shoulder whenever he runs with the football, Jalen Hurts said, “I got a bounty on me every week I go out there on the field, so I’m going to go out there and play my game, whatever happens, happens."

In the Eagles' Week 18 matchup against the Giants, it was clear that Hurts' shoulder was not remotely close to 100 percent. Nick Sirianni acknowledged postgame that Hurts was "hurting bad." One QB sneak aside, the Eagles did not call any designed quarterback runs in that game, and when Hurts scrambled he was quick to slide when there were oncoming defenders.

This Saturday against the Giants' defense, when Hurts drops back, will he have the same accuracy and velocity that he had through the first three months of the season? When he runs, can he do so without fear of his shoulder becoming inflamed after a hard hit? We won't know until Saturday night, but the NFL is brutal, and the Giants are going to want to find out about that shoulder early in the game.

The Giants have one of the highest blitz rates in the NFL under Martindale, and you can bet that they are going to want to pressure and hit Hurts early to see how he responds. Blitzes are coming. If they are effective early, expect them to continue throughout the night.

Of course, if Martindale gets blitz happy, the Eagles are going to get some man-to-man matchups on the back end, and, well, good luck with that against Brown and Smith if the offensive line can pick up those blitzes. Here's Smith dusting slot CB Darnay Holmes in the Week 14 matchup on a Giants blitz.

And here's Brown simply winning on a 50-50 fade ball down the sideline Week 18 against a blitz:

The Eagles could really use a big play down the field early to dissuade Martindale from becoming overly aggressive.

3) Eagles TE Dallas Goedert vs. the Giants' linebackers and safeties

In their Week 16 and wildcard round games against the Vikings, the Giants struggled to find answers for TE T.J. Hockenson, who had 23 catches on 27 targets for 238 yards and 2 TDs in those two games combined.

The Giants' starting linebackers are Jaylon Smith, who began the season on the practice squad, and Jarrad Davis, who the Giants signed off of the Lions' practice squad a few weeks ago. Those guys are not equipped to cover good tight ends, while Julian Love is a sub-5'11, sub-200-pound safety who the Vikings looked to attack with Hockenson's size.

Goedert was playing at a high level when he went down with a shoulder injury against Washington. Since returning to the lineup, he has just 16 targets in 3 games. It might be time to unleash him.

The Giants have a pair of fast, young edge rushers in Thibodeaux and Ojulari. Thibodeaux's rookie numbers (4 sacks, 2 FF) weren't eye-popping, but he finished strongly and showed some game-wrecking ability in a monster performance against the Commanders Week 15.

Primetime liked Kayvon Thibodeaux who was directly responsible for adding points and taking points off the board for the Commanders. pic.twitter.com/9cxHXjhqwF

Thibodeaux gets all the hype, but in my opinion, Ojulari is the better, much more productive player. He had eight sacks as a rookie in 2021, and 5.5 sacks with three forced fumbles in just seven games in 2022.

Azeez Ojulari has 5.5 sacks in 6 games for the Giants this year.

Mailata is a brick wall against power rushers, but he can struggle at times with speed. On the other side, these are the types of players that Johnson eats alive, but how he responds to his abductor injury is a big question mark heading into this matchup.

Lawrence is the Giants' best defender, and he gave the Vikings fits on Sunday.

Of course, on the interior of their offensive line, the Eagles have a Hall of Famer still playing at a Hall of Fame level in Jason Kelce. He is flanked by Pro Bowl LG Landon Dickerson and Pro Bowl alternate RG Isaac Seumalo.

Lawrence earned second-team All-Pro honors while racking up 68 tackles and 7.5 sacks in 2022. He also played 994 snaps this season, third-most in the NFL among interior defensive linemen, and the reason is simple — the Giants don't have good defensive line depth across the board, but particularly along the interior. Against the Vikings, Lawrence played 51 of 57 snaps (89%). He doesn't often come off the field. The Eagles could look to run some tempo, either (a) to get Lawrence off the field at times, or (b) tire him out for the second half.