Who is better, Eagles or Giants: Defense edition 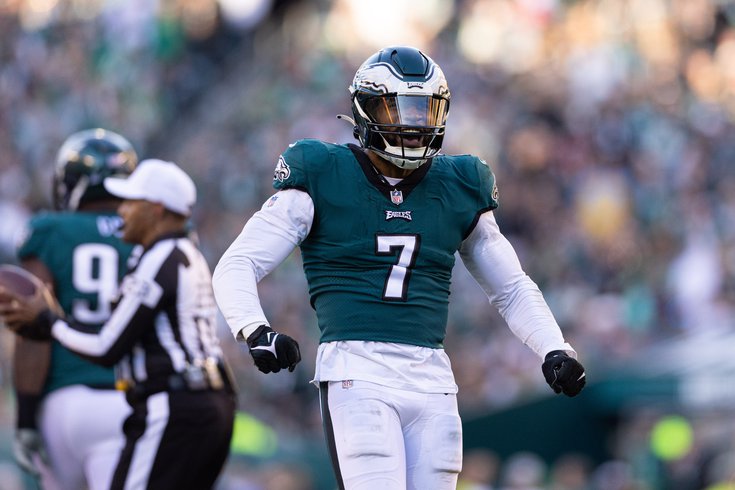 The Philadelphia Eagles' defense is better than the New York Giants' defense. That wasn't really a serious question that was posed in the headline. The Eagles had the No. 1 defense in the NFL in yards allowed, and were eighth in points allowed. The Giants were 25th in yards allowed, and 18th in points allowed. The advanced stats also liked the Eagles (4th EPA/play, 6th DVOA) better than the Giants (28th EPA/play, 29th DVOA).

Earlier this morning we compared the Eagles' and Giants' offenses, player-by-player. It's a little harder to take that approach on defense, so we compared them a little more broadly, by defensive line, linebackers, cornerbacks, and safeties.

The Eagles' defense finished with 70 sacks in 2022, which led the NFL. The next-closest team, the Kansas City Chiefs, had 55. Those 70 sacks broke a team record, and fell just two sacks shy of the NFL single-season record. If you count Haason Reddick as a defensive lineman, then 62.5 of the Eagles' 70 sacks came via the defensive line.

It is an elite group with star players and incredible depth. Their D-line depth chart looks something like this. Obviously, they are not playing six defensive linemen at a time, but we'll show the depth chart this way because they play a bunch of different fronts.

Reddick had 16 sacks, while Graham, Hargrave, and Sweat all had 11 each. Cox chipped in seven, while Williams had four.

In-season, the Eagles also added quality veteran depth in Suh, Quinn (who was credited with five pressures in 18 snaps against the Giants' backups Week 18), and the run-stopping Joseph to pair with Davis.

There isn't another defensive line in the NFL that has this combination of talent and depth.

The Giants have some good players, too.

Thibodeaux and Ojulari are both 22, and Lawrence is 25, so the Giants have really good, young talent to build their defense around. They do not have quality depth.

The Eagles' starters are better, and they are also the far deeper team.

T.J. Edwards finished the 2022 season with 159 tackles (10 for loss), two sacks, and seven pass breakups. He has become a steady, reliable presence in the middle of the Eagles' defense. Opposite Edwards is Kyzir White, who was solid for the better part of the season, but struggled in coverage the last few weeks of the season when the Eagles were missing Chauncey Gardner-Johnson and/or Avonte Maddox.

One of the Giants' biggest offseason needs in 2023 will be at linebacker, where they have a pair of replacement level players starting in Jaylon Smith and Jarrad Davis, who they signed off of the Lions' practice squad a few weeks ago. I would expect the Eagles to make Dallas Goedert a big part of the gameplan against those two guys.

Darius Slay made his fifth Pro Bowl in 2022, and James Bradberry, formerly the Giants' best corner, was voted second-team All-Pro. The Eagles' regular starting slot corner is Avonte Maddox, a good player who will likely not play in this matchup. The Eagles will likely have Chauncey Gardner Johnson play in the slot when they are in nickel, with Reed Blankenship coming off the bench to take Gardner-Johnson's place at safety.

The Giants' best corner is the banged-up Adoree Jackson. He wouldn't start for the Eagles. Opposite him is Fabian Moreau, with Darnay Holmes in the slot.

The Giants' starting safeties are Xavier McKinney and Julian Love. McKinney had a big year in 2021, when he racked up 93 tackles, five INTs, and 10 pass breakups, but he has been quiet (and he missed eight games) in 2022. Love is a competent safety who had a bad game against the Eagles Week 14.

The Eagles pretty clearly have the better safeties when Gardner-Johnson is prowling the back end, and he led the NFL in INTs despite missing five games. But even Blankenship has played reasonably well when he has been called into action.

Edge: I hate to be the guy who just says the team that he covers is just better across the board, but even at safety I have to give a slight advantage to the Eagles.