Who is better, Eagles or Giants: Offense edition 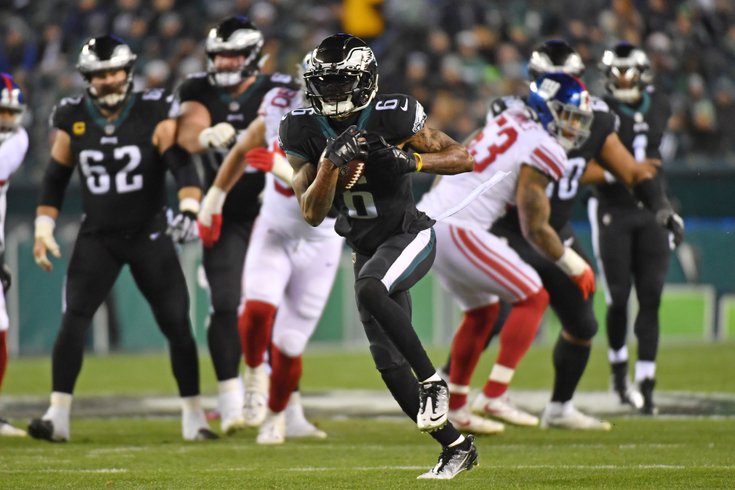 The Philadelphia Eagles' offense is better than the New York Giants' offense. That wasn't really a serious question that was posed in the headline. The Eagles scored 6.1 more points per game, gained 49.8 more yards per game. They were also advanced stats darlings (3rd EPA/play, 3rd DVOA), though the Giants certainly held their own (9th EPA/play, 10th DVOA).

Still, just for fun, I thought we'd take a position-by-position look at each team on both sides of the ball. We'll start with the offense.

Daniel Jones was a turnover machine the first couple years of his career, but has protected the ball far better over the last two. In 2022, he only threw 5 INTs. The tradeoff is that he was also arguably the most conservative quarterback in the NFL, as the Giants rarely hit on chunk plays in the passing game, and Jones only had 15 TD passes. As a runner, Jones is very much a threat, as he racked up 708 rushing yards on 120 rushes (5.9 YPC) and 7 TDs. His style of play has allowed the Giants to (mostly) hang with opponents, but almost never pull away from them.

Hurts might have been the MVP of the league had he not sprained his throwing shoulder Week 15 against the Bears. Like Jones, Hurts did a great job of not turning the ball over in 2022, as he only had 6 INTs. The difference is that Hurts consistently connected for big plays down the field to his receivers. He is also a more explosive runner, even if some rushing stats (like yards per carry) favor Jones (partly because of all of Hurts' sneaks and kneeldowns).

Edge: If healthy, Hurts is worlds better than Jones. Eagles.

As runners, Saquon Barkley and Miles Sanders both had big seasons:

Both backs were inefficient as receivers, and they each averaged low yards per catch. Barkley was used in the passing game far more than Sanders:

Edge: Barkley is the Giants' most important skill position player, by far, while Sanders is probably, like, fourth on the Eagles. Significant edge to the Giants here.

The Eagles' top receivers are A.J. Brown and DeVonta Smith, with Quez Watkins in the slot.

The Giants' top receivers are Isaiah Hodgins and Darius Slayton, with Richie James in the slot.

I will note that James (57-569-4) is a more trustworthy slot receiver than Watkins, who caused some interceptions down the stretch this season because of some poor routes.

Edge: Eagles, by a mile.

Daniel Bellinger is a fourth-round rookie who had a decent enough rookie season with the Giants, making 30 catches for 268 yards and 2 TDs.

Dallas Goedert had 55 catches for 702 yards and 3 TDs this season, despite missing five games due to a shoulder injury. His 702 receiving yards were good for third in the NFC. Goedert had 10.2 yards per target in 2022, which led all NFL tight ends (minimum 20 targets), just as he did in 2021. He is also a plus blocker with no obvious holes in his game.

The Eagles' and Giants' offensive lines look like so:

Every single starter along the Eagles' offensive line either made the Pro Bowl (Dickerson, Kelce, Johnson) or were alternates (Mailata, Seumalo). Kelce and Johnson were both named first-team All-Pros. Johnson is dealing with a sports hernia injury, so it will be a question as to whether he is able to play at his usual elite level throughout the playoffs, but overall, this is the best offensive line in the NFL.

The Giants' offensive line, meanwhile, made strides in 2022. Thomas made his first Pro Bowl, and the line as a whole was at least respectable, whereas in past years it was often an abomination. Neal is the Giants' biggest concern, at RT. While he has high upside as the seventh overall pick in the 2022 NFL Draft, he was a major liability as a rookie. The three interior guys are exactly that... just guys.

Edge: Eagles, by a mile.