What they're saying: Eagles bye week blues and the art (and legality) of the QB sneak

Plus, Eli will be back in town 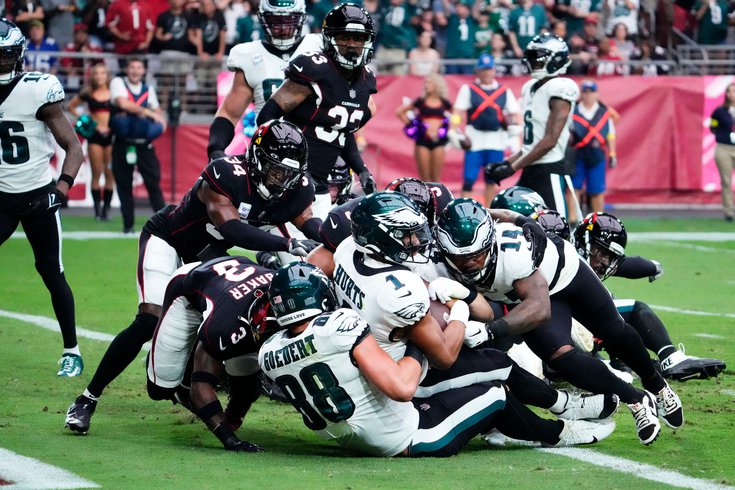 The QB sneak has been near unstoppable for Jalen Hurts and the Eagles.

It's an anxious two weeks waiting for that first-round bye to be over with, but now there are only a few days left and a clearer picture of what the Eagles are going up against.

They'll get the upstart New York Giants for the third time this season on Saturday night, this time with a (hopefully) much healthier roster and Super Bowl aspirations on the line.

There's all the insight into the matchup for sure, and there will be plenty of that in the days to come. But that first-round bye also gave the media a bit of a break from the constant grind too and with it time to think, inquire, and really dig deep.

So here's the latest "What They're Saying" about the Birds, with in-depth pieces ranging from the art of the QB sneak down to the Eagles' dietary habits...

The art (and legality) of the sneak

With Jalen Hurts under center behind one of the best offensive lines in football, the Eagles have run the QB sneak to near perfection all season, so much so that it's gotten the rest of the league up in arms about it how legal their means of effectiveness at it actually is (i.e. pushing)

From The Athletic's Kalyn Kahler, in a deep dive into the art (and legality) behind the Eagles' near-unstoppable QB sneak:

“They’ve taken it to another level,” said Giants defensive line coach Andre Patterson. “One guy is on each cheek and one guy is behind, and all three are pushing him forward. That makes it real difficult to stop.”

Opponents may not like the presence of those cheeky pushers, but these Eagles are legal.

An NFL spokesman said in an email that the change had nothing to do with USC’s infamous “Bush Push” versus Notre Dame a year prior but was prompted by “the difficulty in identifying specific acts and consistently enforcing the prohibition against pushing.” Now Rule 12, Section 1, Article 4 outlaws pulling in any direction, as well as encircling a teammate, and pushing a teammate to assist him in blocking a player from recovering a loose ball.

“That changed big time,” Patterson said. “Because before, the quarterback just had to do it by himself. So once he got stopped it was up to his leg drive to keep going forward, which in most cases is not very good because you got 600 pounds pushing (back).” [The Athletic]

At this point, it's safe to say that Haason Reddick will be the first to tell you that signing with the Eagles was one of the best decisions he's ever made.

He joined his hometown team, led them in sacks with a new career-high, earned his first Pro Bowl nod, and should absolutely have a place in the Defensive Player of the Year conversation.

Lost in the shuffle a bit though was that this will also be Reddick's first trip to playoffs, a career milestone that was never afforded to him because of the bad Cardinals and Panthers teams he was on before this.

His usual vacation plans are on hold now as Reuben Frank writes:

The 28-year-old Reddick is the oldest player on the Eagles' roster who’s never played in the postseason. The only other current starters with no playoff experience are Kyzir White and Reed Blankenship.

“It’s crazy,” he said Friday. “I knew eventually it would come. I didn’t know when. I’m just happy I got that chance. Now that I do, I’m just trying to make sure I’m a part of making sure we win, that’s all that really matters.

“You talk about it, especially with guys like B.G. and Rob (Quinn). Coach Wash (Jeremiah Washburn) and I, we talk about it in our room, because for me and Wash, this is our first year. And then you have guys (who’ve gone to the playoffs a lot).

“I’m learning what it really takes to win at this point. Just great things. Turning up the urgency and just honing in, locking in on football for another month to make sure that we make that ultimate goal.”

In the last couple weeks, Reddick was named to his first Pro Bowl team, he was named NFC Defensive Player of the Month for December and he was named second team on his first all-pro team.

His 16 sacks are 6th-most in Eagles history – Reggie White owns three of the top five spots – and he led the NFL with five forced fumbles.

It’s been quite a year of firsts for the Haddon Heights High School graduate. [NBCSP]

Philly isn't exactly Eli Manning's favorite place to catch a football game, but he said he's willing to make an exception for the Giants' playoff run.

From the Monday Night Manningcast during Bucs-Cowboys:

Peyton: "Are you going to Philly next weekend?"

Eli: "I was trying to keep that quiet, but I said when I retired I would never go back to a football game at Philly, but I think I had to break my promise. I think I have to go there. I can't wait to see the amount of double birds I get." [ESPN/Awful Announcing]

"I said when I retired that I would never go back to a football game at Philly, but I think I have to break my promise (for Giants-Eagles). I think I have to go there. I can't wait to see the amount of double birds I get. Could break a record."- Eli Manning 🏈😂 #ManningCast pic.twitter.com/HzowYLzP0S

Maybe he'll reunite with the kid that flipped him off in the stands all those years ago.

Jalen Hurts isn't the star QB of the Eagles he is today without losing his starting job in college at Alabama, nor is he without that crucial next season at Oklahoma.

But that year with the Sooners wasn't about simply showing up to play for the draft stock, as The Inquirer's Matt Breen chronicled. Hurts fully bought into the team, furthering the development into the leader he is now:

Hurts cemented himself in Philadelphia as a leader, bringing a presence to the team almost as soon as he arrived. And that’s how he was in Oklahoma, arriving with just a season of eligibility remaining.

He easily could have been a mercenary as he built his stock for the NFL draft. But Hurts, from his first practice to his first throws with a new receiver, invested in his team.

“He helped others believe in themselves even if they didn’t believe in themselves. He speaks life into his teammates,” [wide receiver Nick Basquine] said. “I think that’s the biggest thing in this game especially when you get to D-1 and the NFL. Everyone is good so it’s more the mental side and I think he understands that by speaking life into his teammates, lifting them up.” [The Inquirer]

In another deep dive from The Inquirer, Eagles beat EJ Smith polled a dozen players on their nutritional habits and how they maintain their weight and strength throughout the season.

The smoothies, a holdover from the Chip Kelly era, are still very much a part of the process, but there is a lot more going on and every player is unique.

The Eagles wanted Davis — who plays heavier than the 341 he dropped to for the combine — to slim down and improve his conditioning. Davis has done just that, starting the season around 355, but dropping back closer to 340 while he was on IR. Going into the playoffs, Davis is hovering around 345.

“It’s hard as [bleep], I can tell you that first off,” Davis said of losing weight. “It makes you very conscious of what you eat and what you drink. Most of your calories are in the things that you drink, that’s what I found out. Cutting out sodas, cutting out the juices, stuff like that. Even having a Gatorade affects you.”

What other dieting tips does Davis have to offer?

“It’s not about what you eat, it’s about how much you eat,” he said. “That’s something I’m starting to find out and realize. Drink a lot of water before you eat, too. That way you get the sensation of being full without actually eating a lot.

“There’s not an end-all, be-all. There’s not a secret sauce that can help everybody, it’s just whatever your body needs.” [The Inquirer]

Good advice for the field and in life.