Eytan Shander: 'The NFL truly needs the Eagles more than it knows'

"The Birds return the Jalen Hurts Experience, an amazing defensive front, seasoned coaching, and one of the most electric crowds in all of sports." 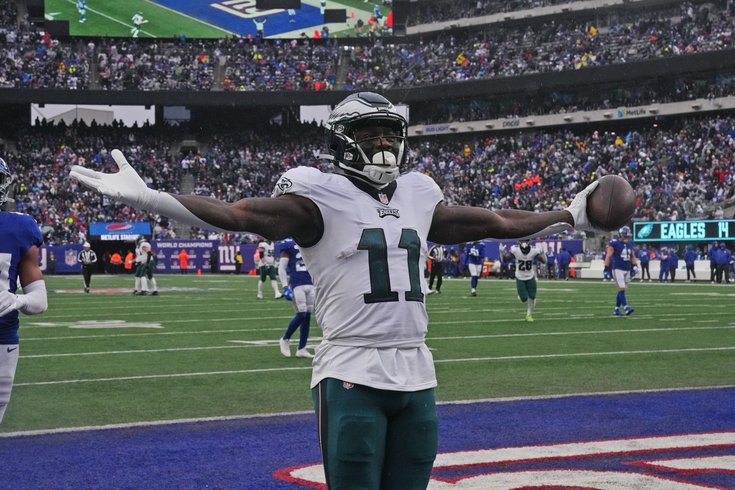 Nothing is worse than manufactured drama where you already know the ending. That’s been the first week of the NFL playoffs despite people’s plea that we’ve had all these one-score games.

The reality is that we all knew the exact endings of these games and even in the case of the Jags, it was just a matter of time. The reality is the NFL truly needs the Philadelphia Eagles more than it knows. So do the fans and viewers.

That’s why this isn’t about how you should stop watching, it’s more a matter of questioning how you can sit through the majority of this slop.

Again, thank God for the Eagles. They return to action with such a high level of play behind a healthy Jalen Hurts. Their identity shifts each week depending on the opponent. They simply aren’t boring, even when they struggled with Hurts. There just always seems to be something electric surrounding this Eagles team – right down to their offensive linemen releasing a Christmas Album.

Maybe it’s the QB position that seems to highlight this, but even some notable names were just duds this week. Hurts and Patrick Mahomes each bring a level of excitement and entertainment that is unmatched. Yes, this is entertainment, and we deserve to be entertained.

Backup QBs and blowouts made up the majority of the “super” wild card weekend. It highlighted the NFL’s super efforts to contrive drama into third time around matchups between division opponents. It’s the easiest way for the NFL to keep playoff games close, while controlling the situation. If the NFL gets lucky, then you have a divisional round like this weekend with New York coming to Philadelphia. More on that in a minute.

The opening weekend was highlighted by “close” games, but they were either blown by backups or a historic playoff lead. While we certainly are not likely to see what happened in Jacksonville again, anytime soon, we did suffer through Tyler Huntley and Skyler Thompson. If you believed that either of these individuals had a chance to lead their teams to victory, you probably think the hero of the movie is going to die in the first fight scene.

Harking back to Steven Segal’s early death in "Executive Decision" would be akin to pointing out the rare and historic comeback by the Jags. You are going to watch a lot of bad movies and football games before you see anything like that again.

But let’s start there.

Anyone paying attention to Brandon Staley knows how bad of a decision maker he is and how costly those mistakes have been. Was it truly a shock to see him lose in such dramatic and foolish fashion? Not for anyone who has made money off the Chargers and their mistakes, mainly from the coaching staff. It was monumental for the Jags, but we have been on Doug Pederson as Coach of the Year from before the season began.

My show on Fox29 nailed all but one of the Jaguars futures tickets, including them winning the AFC South. I saw Doug, like you saw Doug, lead the impossible before in Philadelphia. So that’s it. The one shining moment of the playoffs?

Seattle was only in a game because of familiarity. The Bills hit an emotional wall the same time they faced a familiar foe in division. The Ravens are a good football team but were missing the most important element, it “looked” close but there was no shot they were winning that game. They had chances. The Giants were the better football team coming into that game and it wasn’t even close. Experts to sharp bettors to Twidiots all saw the same thing, New York was red hot and had a mobile QB who can throw. The other side was Kirk Cousins, doomed to fail. Shock? Try inevitable.

Then we get to Monday night. The ultimate waste of time. Congratulations to the Cowboys, they beat a team the NFL insisted made the playoffs. Tom Brady got to say goodbye and now the Stephen A Kellerman’s of the world get to yell and scream about his possible destinations for the next six months.

Brady was awful with hollow stats all year; he survived an atrocious division and had equally bad coaching all around him. It was the worst season of his career as he finished with a losing record, most of those losses on him. He looked afraid of contact against the Cowboys and was a waste of a roster spot for a team that will rebuild moving forward. Dallas didn’t do anything outside of show up, that’s all they really had to do against a non-playoff team.

Was that fun for you? I turned the game off after the first quarter. It just seemed so manufactured and contrived with the Brady stuff not matching up with him playing well on the field.

Maybe that’s part of why I miss the Eagles so much, and why the NFL truly needs the return of the Birds. Their drama isn’t manufactured. The TV will always come up with something, but this team is full of fun to watch football players. Guys who love the game and love playing it, but are constantly kept honest due to the city and fan climate where they play.

They go through real life drama like all of us human beings go through, but this team isn’t full of nonsense. We aren’t holding our breath each week to see what a maniac owner might say or do for that matter. We don’t sit up late at night scared at the thought of Hurts playing for another team next year. We don’t even have the weird feeling of wanting a rent-a-legend out of our house, like the Bucs do with Brady.

The Eagles and their persona will bring back actual drama to the field and your TV set. This isn’t going to be an easy game, but at least the excuses and caveats with the first round are done. Even the Niners have proven that if they lose, it’s because they lost to a better football team, not because the proverbial other foot finally dropped with Brock Purdy.

That was Geno Smith, Skyler Thompson, Tyler Huntley, and Tom Brady. A bunch of backups.

The Birds return the Jalen Hurts Experience, an amazing defensive front, seasoned coaching, and one of the most electric crowds in all of sports. They also happen to be one of the most entertaining teams in the NFL. I’ll save my actual prediction for later in the week, but the Birds will not waste your time this week.