Is Eagles wide receiver A.J. Brown on the verge of true superstardom?

If Jalen Hurts is the Eagles most valuable player, try and argue that A.J. Brown isn't the second most valuable. 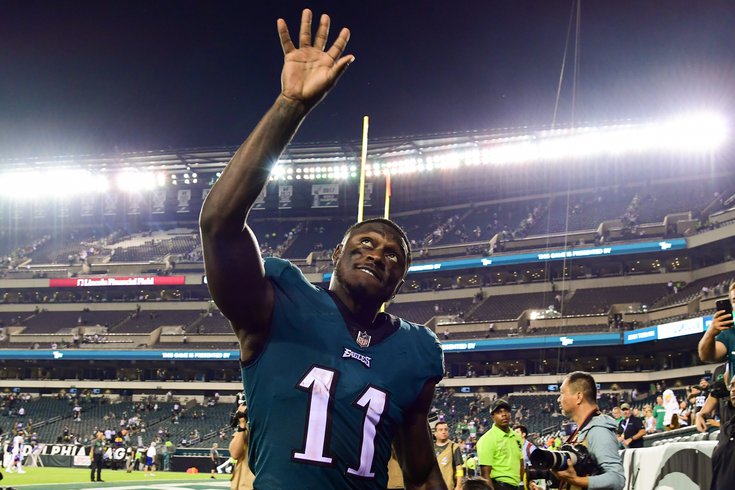 WR A.J. Brown leaves the field in celebration after the Eagles' Monday night win over the Vikings on September 19, 2022.

And we don't mean that in any kind of disrespectful way.

The Eagles are 14-3 and well-rested, set to host the Giants in the Divisional Playoffs Saturday. They have a shot at a Super Bowl, thanks to MVP-caliber quarterback play, one of the best pass rushes in NFL history and the best offensive line in football.

They also might have the best wide receiver in football.

If Hurts is the Eagles most valuable player, try and argue that Brown isn't the second most valuable. A draft night trade brought the former Titan to Philadelphia and his impact was immediate and immense. Hurts, who was growing like a weed into his superstar self, finally had a trusted target — a big, fast and gold gloved one at that —  and it wouldn't be a stretch to argue that without Brown, Hurts does not succeed even close to as much as he has this season.

Not only does Brown demand the attention of the opposition's best cornerback, but he's also opened things up for second year wideout DeVonta Smith to emerge as an elite pass catcher in his own right. Brown set an Eagles record in 2022-23, tallying 1,496 yards (on 88 receptions), and Smith set a team record with 95 catches.

“It means a lot to leave my footprint on this organization," Brown said last week. "There were a lot of great receivers before me. For me to do it the first year, it means the world."

The stat nerds over at FiveThirtyEight.com have Brown as their No. 1 receiver of the year, giving him a total score of 90 (by their complicated metrics). Justin Jefferson (85), Stefon Diggs (84), Tyler Locket (84) and Smith (81) round out the website's top five.

In four NFL seasons, Brown already has an impressive 4,491 receiving yards on 273 catches for 35 touchdowns.

The NFL used to be a league with wide receivers in the spotlight, but it's become more driven by the star power of its quarterbacks in recent years. Brown is in a big market in Philly and he has a big personality. Perhaps he's on the verge of becoming one of those guys.

It's entirely possible that Brown can emerge, in this offense with Hurts slinging the ball, as a first team All-Pro next season. And a potential Super Bowl run could propel him into being one of the NFL's most recognizable figures.