"Anyone could've gotten it that night." 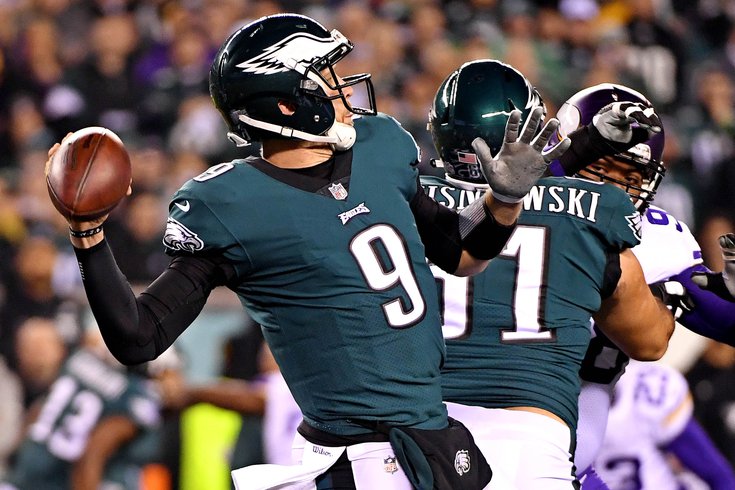 In a move they would assuredly come to regret, Minnesotans were feeling themselves in mid-January 2018. Their Vikings had just pulled off the "Minneapolis Miracle" and the Twin Cities would soon be hosting the Super Bowl. A win over an injury-decimated Eagles squad that barely squeaked out a Divisional Round win over the Falcons was all that was needed to be the first team ever to play in their own stadium in the Big Game.

They were the Team of Destiny if you listened to any talking head among the national NFL media. They were coming to Philadelphia, ready to take over Lincoln Financial Field as they marched their way to the franchise's first ever Super Bowl victory. Taking a big ol' whiff, those Vikings fans went to a Philadelphia staple, the Art Museum, for a makeshift pep rally and to deck out the Rocky statue in purple and yellow.

Those Midwestern folk may have had simple goals in mind to watch their favorite team. Sorry. They were at the wrong place at the wrong time.

As everyone knows, the Eagles were reeling in the 2017 postseason after the loss of would-be MVP Carson Wentz. Backup QB Nick Foles guided them to a win over Atlanta, but didn't look like anything special. That was the assumption about how Foles would play in the NFC Championship Game. In a slap in the face to the entirety of the Delaware Valley, the Birds were three-point underdogs in their own home.

I was in the Jetro Lot all morning and afternoon that day, Jan. 21, 2018. I hung out with family and friends – new and old – chomped on some eggs, bacon and burgers and found myself drinking out of a can that always had a hole in it.  It was an event. The Birds hadn't hosted the conference championship in 13 years. I was just a kid then. I entered the Sports Complex five years ago today a recent college graduate and a tad more hardened, but that youthful passion still flowed through me.

The city needed this win. It deserved it.

I strolled into the Linc with a dog mask on (you couldn't see anything in those), practically foaming at the mouth. Everyone was ready to match that energy, too.

You said the Eagles can't survive all these injuries? You said their Super Bowl hopes were gone? They're going to do it right in front of your face.

The raucous vibes of the fan base, however, evaporated almost immediately once that game started.

On the first drive of the game, the Vikings marched down the field and scored a touchdown. The Eagles punted on their next possession. There was a lot of "I've seen this movie before" anxiety permeating throughout the stadium, as the ghosts of Aeneas Williams, Ronde Barber, Ricky Manning Jr. and Larry Fitzgerald danced in fans' minds. I bought a dog mask on Amazon just to watch the Eagles get their teeth kicked in?

Then something happened, something that changed the course of this franchise, this city and countless fans' lives. When Vikings quarterback Case Keenum dropped back to pass on Minnesota's second drive, Eagles defensive end Chris Long ever so slightly got a hand on him and caused an errant pass that fell right into the arms of slot cornerback Patrick Robinson.

Robinson, going further and further down in history by the step, scampered across the field and found himself in the end zone for a wild pick-6.

The Eagles beat the Vikings 38-7. The Vikings dominated part of the first quarter, but the tide changed following a Patrick Robinson pick-six. The Eagles scored 38 unanswered points, while Nick Foles threw 352 Yards and 3 Touchdowns. SB52 is two weeks away. pic.twitter.com/YjzaPAllCm

I'm not exaggerating when I say that Lincoln Financial Field was shaking. I had never heard anything louder in my life before or after. Sections and rows of Eagles fans turned into a First Unitarian Church-level mosh pit, as I started the play in my normal seat and found myself about 50 feet away by the time the Birds marched out to kick the extra point.

The crowd smelled blood and they got it as the Eagles poured on Minnesota the rest of the night, putting up 38 unanswered points, destroying Vikings fans' dreams of a Lombardi Trophy and letting the entire universe know that you can count out Philadelphia at your own risk.

The guy was slinging lasers all night. Touchdowns to Alshon Jeffery. Touch passes to Zach Ertz while he shook Vikings safety Harrison Smith into the Shadow Realm. A destiny-crushing flea flicker TD to Torrey Smith. The improbability of it all from a guy who almost burned out of football the previous offseason made it all that more magical.

The Vikings had the top defense in football in 2017. Foles didn't care. Doug Pederson didn't care. LeGarrette Blount didn't care as he left a chalk outline of Minnesota safety Andrew Sandejo on the grass as he barreled his way into the end zone. Not a single rabid fan screaming at the top of their lungs and hugging strangers gave a damn.

If someone says the Super Bowl is their favorite game ever, I totally get that, but that's not my choice. That was agonizing to watch. It was a four-hour panic attack. I was dead sober because I was too sick to my stomach to even get a drop of liquor in me. I found myself dry heaving in my best friend's backyard at halftime despite the Birds having a 10-point lead. It was torture for me until Brandon Graham's iconic strip sack.

The NFC Championship Game? It was over in the second quarter! It was a party! It was all happening in South Philly! Halftime in the Linc's concourse was filled with sicko fans (term of endearment) going hard like there was no tomorrow. I had never seen anything like it. This was the pinnacle the Eagles could reach in Philly and they were blowing the doors off the Vikings in embarrassing fashion.

There's some speculation that the NFL will have conference championship games at neutral sites in the future. Screw that. You can't rob a fan base of the feeling that Eagles fans experienced on that fateful night five years ago. That's pure playoff football. Take away the corporate schmucks who fill the stands in the Super Bowl. What is the Eagles' Super Bowl run without them stomping the Vikings in front of everyone losing their minds and going wild? As someone who was there, it wouldn't be the same at all.

At some point during that 38-7 onslaught, I grabbed my friend I was next to and said, "We could be anywhere in the f-----g world and there's nowhere else I'd rather be."

I woke up the next morning, walked to the Penrose Diner, ate an omelette and drank about five cups of black coffee. Was the night before a dream? Did I not wake up yet?

What a world. What a team. What a life.

As a previously mentioned defensive end once said, "Anyone could've gotten it that night."

Anyone could’ve gotten it that night https://t.co/Rwp7K3yZ4v