Eagles-Giants: Predictions, betting odds and more for the NFL Playoffs

Can the Eagles put away the Giants for a third time? 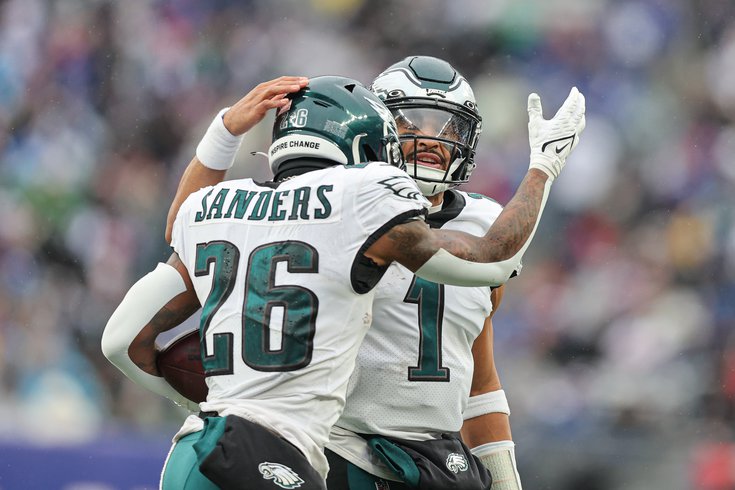 Eagles RB Miles Sanders celebrates his first-quarter touchdown with QB Jalen Hurts at the Giants back in Week 14.

It's hard to beat a team twice in the NFL and even harder to do it a third time, but that's the task at hand for the Eagles as their playoff run finally begins.

For the third time this season and for consecutive games at the Linc, the Eagles will get the upstart New York Giants as their divisional-round opponent, with the stakes at their highest yet.

The Giants – led by quarterback Daniel Jones, star running back Saquon Barkley, and first-year coach Brian Daboll – are coming off a massive wild-card victory over the Vikings for their first playoff win since Super Bowl 46 more than a decade ago.

While the top-seeded Eagles – led by MVP-caliber QB Jalen Hurts, breakout pass rusher Haason Reddick, and numerous veterans like Jason Kelce and Brandon Graham –  are hoping the extra rest from a first-round bye gave them the necessary time for key players to get healthy so that all the work from a 14-3 regular season quickly results in a trip to Arizona.

It's easier said than done – the No. 1 seed far from guarantees an automatic road to the Super Bowl – but the Eagles have answered nearly every call so far.

Then again, so have the Giants, who took much of the NFL by surprise.

So how are our writers feeling about Saturday night's divisional playoff matchup?

The Giants are coming off of an impressive road playoff win in Minnesota, in which Daniel Jones threw for 301 yards, ran for 78 more, and the defense negated star wide receiver Justin Jefferson.

The Eagles aren't the Vikings. They have an elite offensive line, weapons galore at the skill positions, and an MVP candidate at quarterback. They are a much better team than the Giants, both on offense and on defense, and hold major matchup advantages in several key areas:

In their Week 14 matchup, when both teams were relatively healthy — and still playing their starters — the Eagles absolutely decimated the Giants, who had no answers whatsoever for the Eagles' offense. The Giants are an up-and-coming team, but the remain quite inferior to the Eagles. If Jalen Hurts is healthy — and I believe that he will show early on that he indeed is just that — the Eagles should handle them.

MORE: All of Jimmy Kempski's Divisional Round Picks

It's a divisional game — and for whatever reason, these are always closer than they should be. The Giants have the momentum and the Eagles have the better team. Something has to give.

I think the Birds' defense, in particular, will prove to be better than the Vikings last week and will hold New York just enough to support the high-powered offense. I see Hurts going off Saturday night, healthier than everyone thought and the Eagles winning but not covering.

Wild Card Weekend showcased that divisional games in the postseason, even when there's a clear talent disparity, can be tricky. Ultimately, I'm expecting Eagles-Giants to look closer to 49ers-Seahawks than Bills-Dolphins.

I have the Birds covering, but maybe it'll be closer than the score indicates. Give me Boston Scott to score a touchdown late to close this one up and send those rabid fans at the Linc home with a win.

After hearing the Eagles cut off "Dreams and Nightmares" to play Eminem in the year 2023, I nearly changed my pick…

However, I’m going to stick with the theme of not overthinking picks that I’ve stuck with all year. The Eagles were the better team all season, and have a better quarterback (albeit, maybe a banged-up QB) with great weaponry. They’ve been better against the run after a stretch of getting killed on the ground, so I’m not as fearful of Barkley as I would be otherwise. I also don’t buy the “It’s hard to beat a team three times!” thing because the 2-0 team has historically won the third game more often than not.

The Giants have a shot, for sure, but I’m still rolling with the better team playing in front of a hostile home crowd.

I've been waffling back and forth over whether the Giants can actually pull off an upset here. Between Jalen Hurts and Lane Johnson still being banged up and the way the Giants played the Vikings (Daniel Jones especially), something just doesn't feel quite right. I'm giving the Eagles the edge here still. In the end, they're just too talented of a group, but I do think the Giants are going to fight them every step of the way. A nail-biter for sure.

It’s hard to beat the same team three times in the same season, as evidenced by the Eagles' history in this same scenario. The good news is this is technically the second time these two teams will square off against each other, as both teams were not mentally present during the regular season finale.

The biggest change for the Giants is health on defense, mixed in with Daniel Jones playing much better than anyone ever thought possible. The difference for the Eagles is they have Jalen Hurts back. It’s hard to swallow such a concept but the final three games of the regular season mean nothing in terms of preparing for this game. The Eagles are just significantly better with Hurts than without him.

There may be some extra motivation by Hurts if he feels slighted by the MVP talk, as it’s already an insurmountable task for the Giants to keep up with the Birds. It’s never easy, but Philly takes it. 27-21.

The third time is unlikely going to be a charm for the upstart New York Giants. The old trope of it's hard to beat a team three times in the NFL is actually disinformation and logically so. Typically the home and home sweep is a clear sign that one team is better than the other and more often than not the home team finishes the job when presented the opportunity with a 13-6 mark in such circumstances during the Super Bowl era.

While New York deserves credit for beating a 13-win but flawed Minnesota team, the reward was a third consecutive road game against a team that laps them in talent.

The path to victory can be traced back toward the Eagles' only loss this season with Jalen Hurts as the starter: turnovers coupled with poor situational work when it comes to third downs, along with a massive time of possession advantage that keeps the Philadelphia offense on the sidelines.

That path, however, is narrower than Skinny Batman himself DeVonta Smith.

Even with Hurts and Lane Johnson at less than 100%, the Eagles will cruise into the NFC Championship Game and await either San Francisco or Dallas.