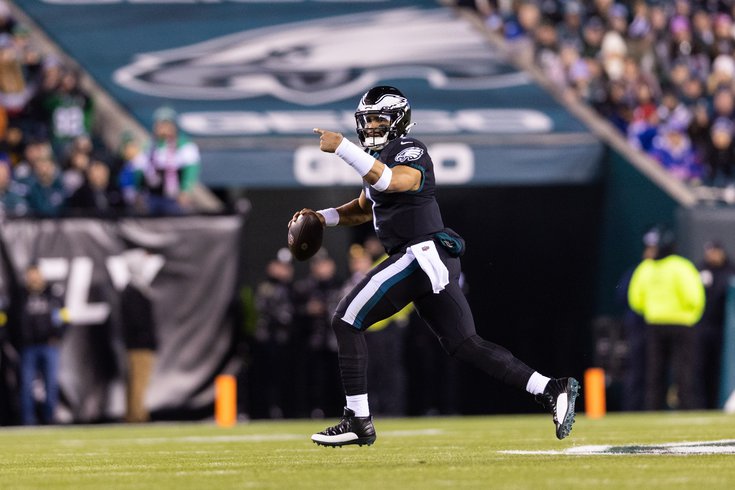 For the gambling degenerates, here are my NFL divisional round picks. To note, the team logos indicate who I think will win the game, not cover the spread. At the end of the picks, I'll note a few teams that I like based on the spread.

Jaguars at Chiefs (-8.5): The NFC and AFC playoffs mirrored each other this season, in that each conference had three teams that were very clearly ahead of the rest of the pack. In the NFC, those three teams were the Eagles, 49ers, and Cowboys. In the AFC, they were the Chiefs, Bills, and Bengals. The two leftover teams that are playing with house money, so to speak, are the Jaguars and Giants.

The 2022 season is already a huge success for Doug Pederson and the once 3-7 Jags, a dangerous team on a six-game winning streak coming off an incredible comeback win after falling behind 27-0 in the wildcard round against the Chargers. They have a fun offense with a diverse set of pass catchers who all get involved. Defensively, they have had a knack for making big plays in big moments.

But ultimately, they are the fresh faces in the playoffs, and the don't have anywhere near as much talent or experience as the Chiefs, who make deep playoff runs every year since Patrick Mahomes became the starter:

The Jags are a fun story, but give me the tried and true Chiefs.

Giants at Eagles (-7.5): The Giants are coming off of an impressive road playoff win in Minnesota, in which Daniel Jones threw for 301 yards, ran for 78 more, and the defense negated star wide receiver Justin Jefferson.

The Eagles aren't the Vikings. They have an elite offensive line, weapons galore at the skill positions, and an MVP candidate at quarterback. They are a much better team than the Giants, both on offense and on defense, and hold major matchup advantages in several key areas:

In their Week 14 matchup, when both teams were relatively healthy — and still playing their starters — the Eagles absolutely decimated the Giants, who had no answers whatsoever for the Eagles' offense. The Giants are an up-and-coming team, but they remain quite inferior to the Eagles. If Jalen Hurts is healthy — and I believe that he will show early on that he indeed is just that — the Eagles should handle them.

Bengals at Bills (-5.5): I really wanted to take the Bengals here, because I trust Joe Burrow a whole lot more than I trust Josh Allen, and well, I just think that the Bengals are the better, hotter football team right now. Unfortunately for them, their offensive line is very banged up.

• RT La'el Collins tore an ACL Week 16 and is done for the season.

• LT Jonah Williams is "week-to-week" with a dislocated kneecap suffered against the Ravens in the wildcard round.

• LG Alex Cappa is "week-to-week" with an ankle injury suffered against the Ravens Week 18.

The Bengals' offensive line will probably look like this:

Missing three offensive line starters is probably just too much for the Bengals to overcome.

Cowboys at 49ers (-4): The Cowboys and Niners matched up in the playoffs a year ago, and the memorable highlight from that game was one of the dumbest play calls I have ever seen. Let's relive the hilarity.

The Cowboys spotted the ball themselves three yards past where Dak slid, the umpire actually did them a favor by only moving it back a foot or so, and the clock expired before Dallas got the snap off. Mike McCarthy then blamed the officials for not spotting it fast enough, and even said "It was the right decision," lol.

"That was the best option ... it's the right decision."

During their now 11-game winning streak, the Niners have scored 30 or more points in eight games, and have also won eight of the those games by at least two scores. They have arguably the best defense in the NFL, and their offense is humming right along behind a great offensive line and skill position players that get wide open and then get yards after the catch in chunks.

Rookie quarterback Brock Purdy put up sterling numbers (18/30 for 332 yards, 3 TDs, and 0 INTs) against the Seahawks in the wildcard round, and people starting comparing him to Tom Brady. While Purdy has indeed been very good since taking over as the starter, he has also been lucky, as he has been fortunate to have some wildly off-target passes hit the ground instead of settling into the arms of opposing defenders.

Purdy may not get away with those kinds of throws against a Dallas defense that has led the NFL in takeaways the last two seasons (34 in 2021, 33 in 2022). I like the Cowboys' chances of winning the turnover battle and producing an upset.